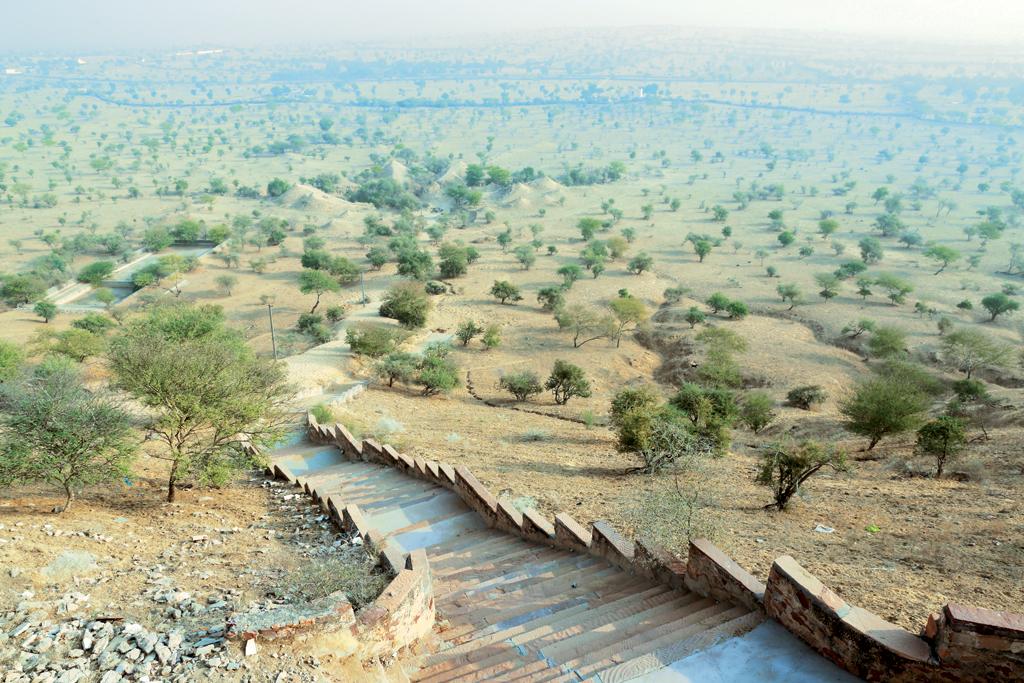 The sacred grove, or oran, at Mukam village of Bikaner district is spread over 290 hectares. It is being looked after by the Akhil Bhartiya Bishnoi Mahasabha

Standing on the land where Amrita Devi and 362 others from the Bishnoi community sacrificed their lives some 300 years ago while protecting khejri (Prosopis cineraria) trees, I wonder what could have prompted them to do so. Then I am told that the thorny tree, one of the few evergreens in the middle of the Thar desert, supports rural economy like no other wild vegetation does. Its protein-rich fruit is relished as a vegetable, sangria, and sold as a cash crop. Its dead leaves act as natural feritliser and are fed to the cattle to improve milk yield. The tree is also valued for timber and firewood. Traditionally it remained protected in the sacred groves, or orans, of the Bishnois—a sect founded in the 15th century by Guru Jambeshwar whose tenets provide protection to plants as well as animals. So in 1730, when the King of Jodhpur Abhay Singh sent his men to the orans of Khejarli village, now in Luni block of Jodhpur, to get khejri wood for burning lime required for the construction of his new palace, Amrita Devi stood between the axe and the tree, saying: “Sar Santeria rage to bhi sasto jaan (If a tree is saved at the cost of one’s head, it’s worth it).”

Today, the area bears no semblance to an oran. “There is absolutely no restriction on felling the tree for firewood and timber,” says a study by the World Wide Fund for Nature (WWF)-India in 1998. Worse, 80 per cent of Khejarali residents do not know what an oran is. With practically no oran land, the concept is almost lost in Khejarli, notes the study published in the book Conserving the sacred: for biodiversity management.

Instead, there stands a park Amrita Devi Bishnoi Vatika. Spanning 16.2 hectares (ha), it has 363 ornamental shrubs, planted in the memory of the martyrs. A huge cenotaph has been built next to the old temple of Guru Jambeshwar. “We are now building another temple for our guru worth R2 crore,” says Gajaram Bishnoi, a resident of Khejarli.

Orans at Khejarli could have degraded due to its close proximity to Jodhpur city, conclude WWF-India researchers after comparing it with the orans at another small Bishnoi village, Pipasar, 210 km away in Nagaur. According to their 1998 study, Pipasar had four well-managed orans—Jambhoji ki oran, Peepanji ki oran, Maharaj ki oran and Hanumanji ki oran—that spanned 36.8 ha and hosted some 60 species of trees, shrubs, herbs and grasses. Today, orans at Pipsar are no different from those in Khejarli.

While ponds, step wells (bawdi), streams or springs are an essential feature of sacred groves in the desert state, none of the orans at Pipasar has a water reservoir. Latest land records show that the four orans are now spread over just 16 ha—this is a reduction of 56 per cent in two decades! What could be the reason for such severe degradation?

Peepenji ki oran, named after Peepanji ki Bhagat, guru of the darji community, lies largely barren since the tailor families have left the village. Only a small stone in the name of Peepenji and a handful of khejri trees can be seen there. On the land of Hanumanji ki oran, the government has built a road, a school and a health centre, says Radhey Shyam, a septuagenarian from Pipasar. A few trees of khejri and bordi (Ziziphus nummularia) and a few bushes of khimp grass (Leptadania pyrotechnica) can be seen on the land that remains untouched. Jamboji ki oran appears better than the rest. Apart from khejri and bordi, there are a number of kumath (Acacia senegal), kankeri (Mayienus emarginatus) and rohida (Tecomella undulata) trees at the grove. But they have been restricted to a small patch as the forest department has built a museum dedicated to Guru Jambeshwar on the land.

Maharaj ki oran, which belongs to the temple of Guru Jambeshwar, has been leased out for farming by the temple priest, referred to as Maharaj. “The orans are dying due to lack of irrigation,” he says. When asked if the Bishnoi community has failed to protect nature, he evades the question and instead suggests getting in touch with Hanuman Singh, secretary of the Akhil Bhartiya Bishnoi Mahasabha (ABBM), whose office is in neighbouring Mukam village of Bikaner district. Sitting in the posh three-storey office, Singh admits that “it is a community failure that we could not preserve orans on the land where our guru was born.”

On our way back, we meet Girdhari Singh from Jaisalsar panchayat mining sand from Maharaj ji ki oran. “We do it on a regular basis and give it to our seth in Bikaner, who sells the sand to builders,” he says. Experts say orans are being encroached upon both by the government and private bodies because there is no clarity about their legal status. “It is private land for community use, unlike gochar (pasture for cows), which are deemed property of the government. So, an oran can be allotted for any use by the community,” reads the book Traditional agricultural and water technologies of the Thar by non-profit Gramin Vikas Vigyan Samiti (GRAVIS) and the UN Development Programme.

Aman Singh of Krapavis, an Alwar-based non-profit, says they are crucial reserves of food and fodder in the dry season. This is the reason, the Rajasthan government’s forest policy, brought out in 2010, had stated mapping all orans in the state, allocating funds for their preservation and facilitating the formation of village-level committees to restore the sense of ownership towards orans among communities. But nothing has been done so far, says Singh, adding that his organisation has prepared a directory of orans in 16 districts and there could be 25,000 orans in the state.

Chief wildlife warden of the state G V Reddy says: “It is impossible for the forest department alone to map all the orans. The agriculture and revenue departments will have to pitch in,” he says. “But even then, we won’t be able to protect orans as there is no law governing them,” he adds.

G Singh, senior scientist at Jodhpur-based Arid Forest Research Institute who has also authored a book, Sacred Groves of Rajasthan, says orans are thriving at those places where the community still has faith in them. One such is the 2,715 ha oran at Kolu Pabuji village in Jodhpur. Residents of the village claim that none of the trees has been felled since the oran was established by their guru Pabuji Maharaj in the 14th century. Former sarpanch Tulsi Singh says some of the khejri trees in the oran are over 1,000 years old. “No product of oran is sold, bought or used for personal use. Only grazing is allowed here,” says Singh. Another septuagenarian villager Saang Singh says, “If someone fells a tree is asked to pay a fine and is admonished in the public. But more than anything, it’s the fear of Pabuji that deters people from causing any harm to the oran.”