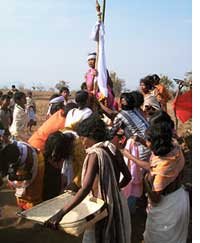 The Union Ministry of Environment and Forests has confirmed mining corporation Vedanta violated forest laws and tribal rights in Orissa’s Kalahandi district. Reports uploaded on the ministry website in March said work has started in anticipation of forest clearance for mining which is a violation of the ministry guidelines.

Vedanta has not mined forestland but construction work has started outside it; pillars have been built for a conveyor belt to transport bauxite from the mining site, the website said. The report on human rights violations said the project has increased poverty and health disorders as people have lost their land and pollution has increased. Earlier, the Church of England had indicted Vedanta for violating the rights of tribal people in the region (see ‘Church of England sells Vedanta shares’, Down To Earth, March 15, 2010).

Chief executive officer of Vedanta Alumunium Ltd, Mukesh Kumar, said Vedanta has nothing to do with violations in the proposed mining area as the mining will be carried out by the state’s Orissa Mining Corporation; Vedanta would source bauxite from it.

“We have not violated forest laws and the pillars for the conveyor belt are on the refinery’s land,” Kumar said.

Union minister of state for environment, Jairam Ramesh said his approach is neutral and he only wanted to ascertain “whether they (Vedanta) have violated the norms which they have”.