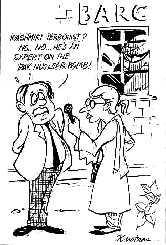 Soon after the Hazratbal shrine in Srinagar was freed of terrorists, several national dailies carried a photograph of an alleged terrorist peering out of a "detention centre" located at the Bhabha Atomic Research Centre (BARC) in Jammu.

Sources at BARC headquarters in Bombay were understandably squeamish when confronted with the proposition that their Jammu facilities were being used for non-scientific purposes. However, they admitted the Jammu unit had suffered because of inadequate infrastructural facilities, especially because the land provided by the state government was inadequate for setting up a full-fledged research establishment.

BARC officials pointed out that since 1990, the Jammu establishment had been whittled down steadily. Of the 100 people initially employed there, 83 were transferred to other BARC centres and the rest have been told they will be transferred soon. Interestingly, the centre's equipment, worth Rs 5 crore, has not been relocated. This includes a Rs 60-lakh computer to facilitate experiments on cosmic rays and help analyse geological and biological material.