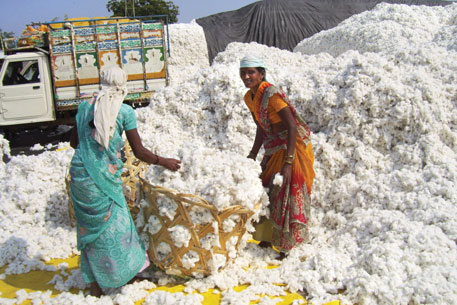 Farmers in the suicide-prone Vidarbha region of Mahrashtra are unhappy with the announcement by the Union Ministry for Agriculture regarding minimum support price of cash crops. Though fertilizer prices doubled over the past two years and pesticide costs continue to soar, the government decided on a paltry increase in minimum support price (MSP) of the region’s four main cash crops—c otton, soybean, paddy and pigeon-pea.

In a report to Parliament earlier in May, the Comptroller and Auditor General (CAG) had accused the Indian government of adopting a “skewed” method of deciding MSP for food grains. MSP is the price at which government agencies procure wheat and paddy from farmers.

Farmer groups are unhappy with the low MSP. Talking to Down To Earth, Gajanan Amdabadkar, Washim-based farmer activist of Shetkari Sanghatana, demanded to know why the Maharashtra government’s recommendation of Rs 5,800 for cotton was not considered. He said the cost of cultivation has doubled in the last two years due to increase in input and labour costs, and MSP must be raised accordingly. The minimum price for cotton, going by cultivation cost, should be Rs 6,000, while pigeon-pea and soybean require a support price of Rs 5,000 and Rs 3,500 respectively. He said the Maharashtra government should follow the example of Karnataka, which has announced Rs 4,500 support price for pigeon-pea.

Nana Naik, paddy cultivator from Chimur in Chandrapur district, said that with a steep rise in labour costs, the cost of paddy cultivation, a labour-intensive crop, has increased steeply. “An MSP of at least Rs 2,500 is required to make paddy cultivation sustainable,” he said, adding that superior varieties of paddy, like kate chinnor, are in demand and have a very demanding cultivation cycle. “Farmers should be paid a premium for conserving such varieties over and above a just MSP,” he said.

Yavatmal-based Vidarbha Jan Andolan Samiti had demanded Rs 6,000 MSP for cotton, Rs 4,000 for soybean, Rs 5,000 for pigeon pea and Rs 2,000 for paddy. Kishor Tiwari of the organisation has appealed to the chief minister, Prithviraj Chavan, to intervene and ensure a fair support price for farmer produce.