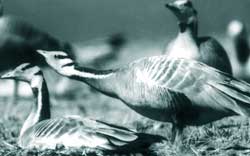 two teams of scientists in China have reported an outbreak of a new strain of a bird flu virus that has killed thousands of wild migratory birds in western China. The virus -- h5n1 -- has killed millions of chicken and wild birds in several East Asian countries since 2003. It has also claimed 54 human lives in the same region over the same period.

The findings by H Chen and colleagues at the Joint Influenza Research Center, Shantou University Medical College, Shantou and another team headed by Jinhua Liu at the College of Veterinary Medicine, China Agricultural University, Beijing appeared in the online editions of Nature and Science respectively in the first week of July.

The incident occurred in Qinghai lake, a protected nature reserve. "On 30 April 2005, an outbreak was detected...By 4 May, bird mortality was more than 100 a day," says Chen. Named the Qinghai strain, it mainly infected bar-headed geese (Anser indicus), which accounted for 90 per cent of the casualties. Other migratory bird species in the reserve include brown-headed gulls (Larus brunnicephalus) and great cormorants (Phalacrocorax carbo).

These birds migrate to India, Australia and Europe, and may carry the virus along, which can prove disastrous for poultry in these places. The bar-headed geese, for instance, breed in Qinghai lake till August. From September, they migrate to Myanmar and over the Himalaya to India, returning to Qinghai around April. "The virus might be carried along the birds' winter migration routes to densely populated areas in the south Asian subcontinent, a region that seems free of this virus, and spread along migratory flyways linked to Europe," says Chen.

Indian experts, however, are not sure about the migratory routes of these birds. "Till now, there hasn't been any case of h5 n1 virus in India," says H K Pradhan, director of the High Security Animal Disease Laboratory in Bhopal. "We have less chances of virus infection. Because of extreme heat, the virus cannot grow and spread," he added.

It is not clear if the Qinghai virus could affect humans, though it has been found virulent to chicken and mice. Meanwhile, the Chinese government has banned access to the lake. According to the head of the ministry of agriculture's veterinary bureau, Jia Youling, the virus did not originate in China as the scientists claimed.