NASA says spacecraft floating in heliosheath, and on the verge of crossing over to the interstellar space 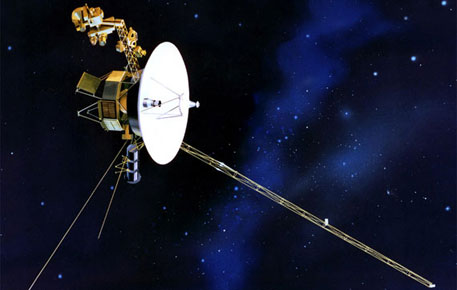 After sending stunning images of Jupiter and other planets of our solar system, Voyager 1 is poised to go where no man-made probe has gone before. It may soon leave the sun's  solar system to explore the realms of other stars, scientists associated with the mission have indicated.

The indication came on the eve of the the 35th anniversay of the launch of the space probe. Voyager 1 was sent into space on Septemer 5, 1977, soon after Voyager 2, its twin, was fired into space on August 20.

The twin spacecraft, the longest-operating ones, have contributed immensely to our understanding of the planets Jupiter,  Saturn, Uranus and Neptune (see 'Notable discoveries of Voyager mission').

The Voyager mission was initially slated to explore only the outer planets of the solar system. However, after completion of the mission, when Voyager 2 flew past Nepture in 1989, the mission was extended. It was renamed the Voyager Interstellar Mission (VIM). The goal of this new endeavour was to explore and understand the outer boundary of the solar system, called heliosheath, and the world of stars—called the interstellar medium—that lay beyond it.

NASA, the US space agency, said in a press release recently that the twin spacecraft are floating in heliosheath, and are on the verge of crossing over to the interstellar space, the region that exists between the various star systems of the galaxy.  NASA defines heliosphere as “the immense magnetic bubble containing our solar system, solar wind, and the entire solar magnetic field. It extends well beyond the orbit of Pluto.” Heliosheath is the outermost area of heliosphere. Heliopause is where the interstellar space meets heliosphere.

The press release noted that from information sent by the twin spacecraft to their Deep Space Network, scientists have observed a change in the environment of Voyager 1. It indicates that the spacecraft is receiving more high-energy particles from the interstellar space than low-energy particles originating from within the solar system.

Ed Stone, Voyager project scientist at the California Institute of Technology in Pasadena, while delivering a public lecture at the Jet Propulsion Laboratory of the institute on September 5, said: “Time after time, what Voyager did was tell us how diverse our solar system was, than we could not have known that sitting here studying our earth.”

As to when the two spacecraft will finally make the jump into the interspellar space, Stone said he wasn't sure. “It could be days, months or even years,” he said. “We don't have any models to predict.” But he reiterated the spacecraft are on the edge of the Solar System.

“Voyager 1 is moving at the rate of 1 billion miles every three years. It's hard to imagine it will be too long (before it enters the Interstellar space),” Stone said, wrapping up the lecture.

The two spacecraft are powered by a system called radioisotope thermoelectric generators (RTGs) that captilizes on electricity generated from the heat produced by the natural radioactive decay of plutonium. The Voyager spacecraft  are expected to keep going until 2025.