Two other candidates from the group contested elections from Bishunpur seat in 2005 and 2009; both lost 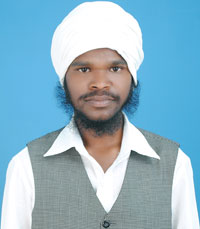 Vimal Asur, the only candidate from the particularly vulnerable tribal group (PVTG) in Jharkhand assembly elections neither owns a car nor needs any posters for his campaign. He walks about 30 to 40 kilometres everyday to meet tribal people in the interiors of the forest before they vote in the state’s assembly elections that begin on Tuesday.

Living in a thatched house, Asur often spends time with a group of supporters to make them aware of various government schemes. “You can get rice for free from public distribution system,” he explains to a tribal family.

The PVTG candidate is contesting election from Bishnupur assembly constituency in Gumla district on a Jharkhand Vikas Morcha (Prajatantrik) ticket. He belongs to Asur community that, according to 2011 Census, has 22, 459 people in the country. “I have no clue how many voters in the Bishunpur constituency are from my community. However, my focus is overall development of tribal people,” he says.

Asur says that Jharkhand has nine PVTGs that are bereft of development schemes. He entered politics after participating in series of agitations for the rights of primitive tribes.

No fear of loss

Before this, two other candidates from PVTG group had contested and lost election from the Bishunpur seat in 2005 and 2009. Asur is also sure that he would not able to garner even 20,000 votes. However, his only objective behind contesting against the candidates who have a lot of money and power is to spread awareness among the tribals. “Our innocent tribes are not aware of their rights. My attempt to contest the election is a bid to make them aware that they can participate in decision-making process,” he says.

Jharkhand has 81 assembly seats, out of which 28 are reserved for schedule tribes. Most of the PVTGs in Jharkhand reside in interior or deep forest areas.

K K Poddar, spokesperson of Jharkhand Vikas Morcha told Down To Earth that party high command felt that PVTGs should be included in the decision-making process. “As a political party, we have a duty to bring neglected community and tribes in the leadership purview…The decision to give ticket to Vimal Asur is an effort to groom leaders from the vulnerable tribe,” he added.