New painkiller used on cattle gets metabolised into diclofenac 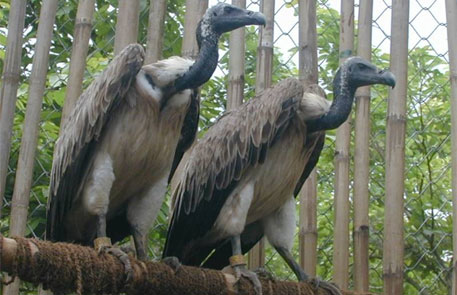 The painkiller associated with the steep decline in vulture populations across South Asia, diclofenac, seems to have made a come back, albeit  in a new form. The new chemical, Aceclofenac, is equally dangerous for vultures as it gets metabolised into diclofenac when administered to cattle and other animals, says a recent research paper published in a peer-reviewed journal, Journal of Raptor Research (volume 46-3), 2012.

Diclofenac is blamed for the 99 per cent decline of Gyps species of vultures—white-backed, long billed and slender-billed; the vultures  die when they feed on dead cattle previously treated with the drug. Conservationists at the Bombay Natural History Society (BNHS) have drawn attention to the use of  this painkiller.

“We want to draw attention to this vital issue and also insist that to ensure long-term vulture survival, safety testing of all veterinary painkillers is necessary to prevent other unsafe drugs such as ketoprofen from being used on animals,” says BNHS spokesperson Atul Sathe.

The research by Pradeep Sharma from Rajasthan University of Veterinary and Animal Science at Bikaner, emphasises that it is important to understand the metabolic profile of veterinary painkillers. Aceclofenac, the new entrant in this category, bears close structural and pharmacological resemblance to diclofenac.

“A study demonstrating in vivo conversion of aceclofenac into diclofenac in cattle will be important,” says the author of the study. Once proven, this will establish the exposure of vultures to diclofenac, he adds. “The aceclofenac issue also points to the need for a comprehensive environmental evaluation of veterinary drugs before granting licences. All other veterinary drugs, which we do not know much about, must be subjected to safety testing,” says Sharma.

The paper demonstrates that aceclofenac should not even be tested for safety on vultures as its threat to vultures is already clear. Safety testing should focus on other molecules which are still in the grey area.

Referring to the recently held symposium at New Delhi to develop a regional response for saving South Asia’s vultures , BNHS director, Asad Rahmani said: “In order to create a safe natural environment for vultures in South Asia, banning the unsafe drugs and safety testing of other potentially toxic drugs should be a priority.”

Efforts of BNHS and Royal Society for the Protection of Birds (RSPB) led to a ban on veterinary diclofenac. Over the years, BNHS and RSPB have been successfully running vulture conservation breeding centres in three northern states of India, with help from forest departments. Efforts are also on to measure the incidence of diclofenac after the ban and sustained advocacy and to find vulture safe zones across the country. Going forward, the crucial aspect would be total annihilation of all unsafe veterinary drugs from the system, so that the vulture programme can reach its logical culmination of rehabilitating the Gyps species in the wild.