Was India truly the party pooper at WTO?

Last year, when commerce minister of UPA government had agreed to the trade facilitation pact pushed by developed countries, it was perceived as compromising the interests of poor nations that need to stockpile foodgrains for public food programmes 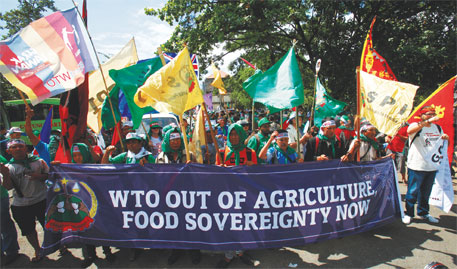 After weeks of speculation on whether India would sign on the dotted line, the new World Trade Organisation agreement to ease worldwide customs rules collapsed late Thursday night in Geneva.

Many (including Indian policy experts) painted India as the villain of the piece by driving itself into “splendid exclusion”. It had vetoed a deal, which, after all, would have been the first global trade reform in two decades.

Trade diplomats in Geneva said they were "flabbergasted", "astonished" and "dismayed" and described India's position as "hostage-taking" and "suicidal", according to a news report in the Economic Times.

The talks collapsed basically over India's “tough stand” on its food security concerns that would require stockpiling of food grains for public distribution at subsidised rates. This was a major concern that was expressed by the G-33 countries—a bloc of 46 WTO members with sizeable poor populations and small farmers—at last year's 9th Ministerial at Bali where the Trade Facilation Agreeement was reached. At the time, the developed world had responded with minimum concession.  A peace clause in TFA said that food security schemes in existence could be in force for another four years till a permanent solution is found, for which the deadline was 2017.

At the Bali meet, the then commerce minister in the UPA government, Anand Sharma, had gone to the meeting saying he would not compromise on food security (a pet legislation of Congress chief Sonia Gandhi), but he appeared to have keeled to pressure of developed nations at the end of the meet and was perceived to have alienated India from poor nations in the G-33 bloc and food importing countries like the Philippines. Sharma had agreed to a July 31, 2014 deadline for TFA and a 2017 deadline for the pact on food security.

The peace clause in TFA, however, had brushed aside the long-standing demand of the developing countries for a thorough overhaul of the Agreement on Agriculture with its outdated methods of calculating the support price provided to low-income farmers (see ‘Fighting a flawed WTO regime). India's agreement to the deal at that time was described by many as a “compromised deal” to usher in “major reforms”, which, according to Paris-based International Chamber of Commerce, would push up global income by US $1 trillion and add 20 million jobs, of which 18 million would be in the developing world.

Thursday's meeting was simply supposed to formally adopt the final trade negotiation text into the WTO rulebook, following its agreement by ministers at the Bali meeting last December.

After the deal collapsed, US Secretary of State, John Kerry, currently on a visit to India, told Prime Minister Narendra Modi on Friday that India's refusal to sign a global trade deal sent the wrong signal, and he urged New Delhi to work to resolve the row as soon as possible, according to a Reuters report. The report also quoted officials of developed countries discussing plans to push ahead with the pact by excluding India from WTO.

With the NDA government showing no signs of backing down to pressure from developed countries this time, it remains to be seen if developing and poor countries can wrangle a better deal for themselves.