Washout in Lima: CoP 20 ends without pledges for emissions cuts till 2020

Climate summit decisions will not result in a climate deal in 2015, says Centre for Science and Environment. World headed for a 3-4°C temperature rise 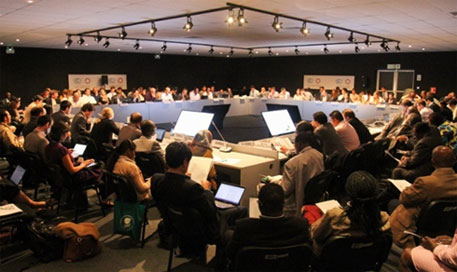 The two-week climate summit in Lima ended on a dismal note. Developed countries did not pledge to reduce their emissions from now till 2020. They also gave no concrete assurance to provide finance and technology to developing countries.

The “Lima Call to Climate Action” is a major setback for an effective climate deal in Paris in 2015, said Delhi non-profit Centre for Science and Environment (CSE).

“The principle of common but differentiated responsibility and respective capability (CBDR), the cornerstone of climate negotiations, has been further diluted and compromised, leading the way for developed countries to continue their high emissions,” said Chandra Bhushan, CSE’s deputy director general who has been attending the deliberations in Lima.

Every country can now decide what they want to do to reduce their emissions. But they will not be asked to explain how their efforts are fair and ambitious. They will also not face any rigorous assessment process ahead of the Paris summit. “No questions will be asked, and none answered,” said Bhushan.

The 20th Conference of Parties (CoP20) will be remembered for bad process, non-transparency and non-inclusiveness. It has further widened the trust gap between the developed and developing countries. The final agreement only postpones the inevitable – a big fight next year in the run-up to the Paris meeting and eventually, a weak deal that will take the world to a 3-4°OC temperature rise, risking the lives and livelihoods of billions of poor people across the world.

CSE researchers said India has not gained or lost anything in the short term, but will lose in the longer term as the principle of CBDR has been further diluted. This deal will lead to a much weaker climate agreement in Paris under which countries will not do much till 2030. This means two things:

Sunita Narain, director general of CSE, said: “The Lima agreement will further erode the differentiation between developed and the developing countries. The burden of tackling climate change will decisively shift to developing countries making their efforts towards poverty reduction and sustainable development difficult and expensive.”

The status of climate finance at COP 20, Lima