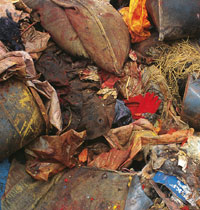 Waste Minimisation -- A Training ManualD B Boralkar and A K Mhaskar Other India Press, Goa 2006

Waste minimisation - a training manual is a timely publication. Various state governments have approached the Supreme Court of India informing it of the huge expenditure they are incurring in treating and disposing hazardous waste. Maharashtra, for instance, has spent Rs 260 crore in the last two years in tackling hazardous waste. Other states also spend large amount of money in managing waste. In such a situation, the message of this book acquires much greater urgency than before: there is no way to deal with waste other than minimising it.

This truism has, however, has been lost on most proponents of industrial growth. Chemical industries have grown in staggering proportions in the last few decades. There are already 45,000 known chemicals and around 1,000 new ones are added every year. Industries generating hazardous waste often complain that there is very little practical information on reducing such waste. This book will come in handy for those amongst them who sincerely wish to set their house in order.

The authors suggest that, by and large, it would not take industries much to reduce their waste. For some the costs might be high, depending upon the nature and quantum of waste; but for most others waste minimisation would require minimal inputs. As a first step industries need to conduct a "waste audit" along with the mandatory environmental audit. The authors accept that budget constraints might prevent certain industries from adopting all measures in one go. But they suggest that expenditure can be prioritised. The book details how such prioritisation can be carried out.

The authors in no way are promoting any single technology but have offered readers/industries a mix of technologies, with their respective advantages and limitations. Industries can pick and chose the method suits that them the best.

Chapter six is the most interesting part of the book. It deals with success stories. Here authors introduce the waste exchange oriented units (weou) approach, which claims that a stand-alone industry has lesser chance of using its own waste than a cluster of industries. Waste for one unit becomes a raw material for the other in such case. weou also helps achieve zero pollution within a cluster of industries.

This manual has excellent information on how to minimise hazardous waste, but its real test lies in how much of it is utilised by the state governments and the industries.