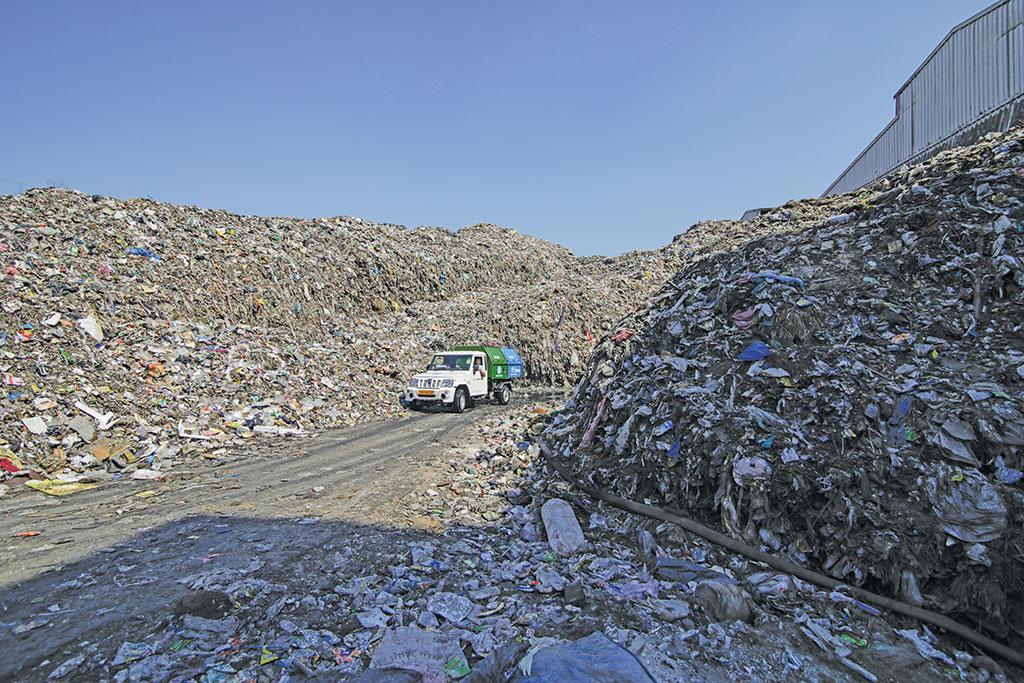 Since 2017, Chandigarh’s only waste treatment plant is not processing mixed waste, dumping it inside the premises

The Municipal Corporation Chandigarh (MCC) and the Jaypee garbage processing plant, the Union Territory’s only treatment plant, have both failed to solve its garbage crisis, suggests a report filed by the Chandigarh Pollution Control Board to the National Green Tribunal.

The waste treatment plant at Dadumajra has all the makings of a landfill. Mounds of garbage line the inside of the premises, giving competition to the city’s only official landfill on the other side of the road. “If things continue the way they are, we will go higher,” says N K Vohra, who manages the plant.

The mounds are the waste that the plant, owned and run by Jaiprakash Associates Ltd, has been rejecting for the past two years, claiming it cannot process it. Since 2017, it has refused to accept unsegregated waste carried by the MCC vehicles after the corporation refused its demand for a fee over and above the terms signed in its memorandum of understanding. About a year later, on July 10, 2018, MCC banned the plant from refusing waste. Since then, the plant takes in all the waste that arrives, but segregates and processes only what it can.

The problem started in 2016. “Since people living in areas near the landfill were complaining about the rising landfill, MCC reduced the volume of waste it was sending to the landfill and increased our load,” says Vohra. The 500-tonne-capacity plant receives around 450 tonnes of waste every day, of which it processes only half. “Though the volume of the waste did not exceed our treatment capacity, we could not process it because it included horticulture, medical, and construction and demolition waste,” explains Vohra. “The plant was designed to process mixed waste, as per the memorandum of understanding it signed with us,” counters K K Yadav, commissioner of MCC.

In 2017, after the plant refused to treat the mixed waste, MCC had filed a case against it with the National Green Tribunal. The case has continued and will be heard next on November 28. “We are waiting for the hearing to resolve the crisis,” says Vohra.

There are problems with SSKs too. At the SSK of Sector 45, for instance, there are two bins, one of which was overflowing with garbage from the previous day when this reporter visited it. As a result, waste collectors had to dump wet and dry waste in the only bin that was empty. At the SSK of Sector 47, there were neat piles of wet and dry waste, but the crane that came to transfer them to the treatment plant mixed them up while dumping them into the truck. The SSK at sector 46, where waste from about 300 households is unloaded, does not have a single bin. “Even four bins are not enough and we have just two,” says Sonu, who collects waste from 150 houses in Sector 28. Yadav, on the other hand, blames the waste collectors “The door-to-door waste collectors are private, contractual employees, who are not equipped to collect segregated waste,” he says, and explains why MCC has not started imposing fines strictly. “There has to be a balance between awareness and enforcement through penalties. The concept of segregation came only in 2016 and we are facing the same challenges as other cities,” he says.

Resident welfare associations (RWAs) in the city too say that people’s participation is low. “If the government wants 100 per cent participation, it should work with RWAs. We have sent MCC a few suggestions about how we can help and we hope they act on it,” says Rajat Malhotra, general secretary of Chandigarh Residents Welfare Association Federation.

The problem of waste segregation has already brought Chandigarh down from being the country’s third cleanest city in the Union Ministry of Housing and Urban Affairs’ Swachh Survekshan survey in 2018 to 20th in 2019. If the issue is not sorted quickly, the problem will pile up, just like the city’s landfill site at Dadumajra.

This was first published in Down To Earth's print edition dated 16-30 November, 2019