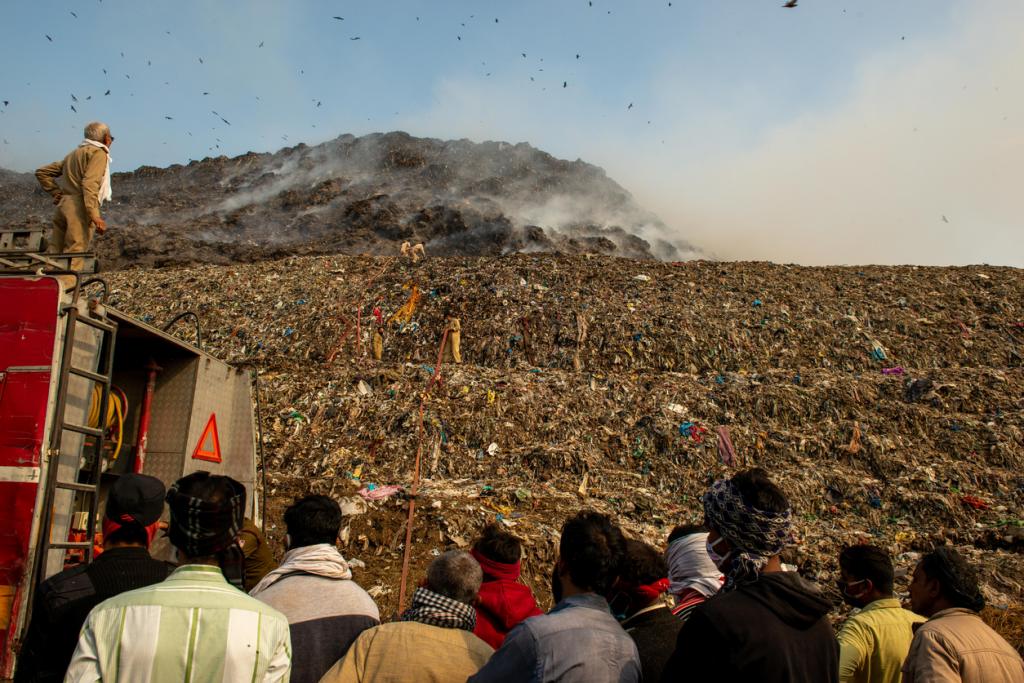 A massive fire broke out at the Ghazipur landfill on the afternoon of March 28, 2022. The flames have been doused but smouldering can be observed at several locations at the dumpsite, said officials of the East Delhi Municipal Corporation (EDMC).

They added it is challenging for them to control the smouldering due high wind speed and warm climate.

Toxins from the fire will spread into adjoining habitations and public spaces, including Noida, Ghaziabad, Khichdipur residential area and Ghazipur market, experts noted. Key pollutants emitted by dumpsite fires include:

The East Delhi Municipal Corporation (EDMC) attributed the fire to very high temperatures, according to media reports. But experts felt the mismanagement of waste at the dumpsite by the local government is to blame.

The treatment and disposal processes at the site are un-scientific, they said: Nearly 74 per cent of the 2,700 tonnes of municipal solid waste generated per day from the EDMC area is dumped there unsegregated.

Merely 26 per cent of waste is processed or treated scientifically by EDMC, the corporation reported to the National Green Tribunal in 2020.

The recurrent fires at the Ghazipur dumpsite threaten the environment and human health ina  variety of ways. First, dumpsite fires present a human health and safety risk for the workers, firefighters and informal waste pickers. Steep slopes at the site often make it challenging to get to the location of the fires. This, at times, requires excavators to carve out access roads for fire engines and other equipment.

Second, fires contribute to slope instability (mass and volume reduction due to fire). Third, the potentially harmful emissions from the fires leave behind a thick and dense blanket of smoke. It contains massive gaseous pollutants such as oxides of nitrogen and sulphur, particulate matter.

Anaerobic decomposition of this class of waste releases explosive methane gas, increasing its concentration to multiple times that in the normal ambient air.

Share of methane entrapped at dumpsites ranges from 5.3–13.9 per cent, according to studies by National Environmental Engineering Research Institute (CSIR-NEERI). Typically, methane concentration in the atmosphere in natural conditions is merely 0.00017 per cent (by volume).

The presence of any ignitable material (hot load) at the dumpsite can lead to massive fires amid high amounts of heat that remain undissipated.

Hot loads refer to waste that catches fire, smoulders or spontaneously combusts. It can include brush, leaves, construction debris, fuel, tires or chemicals that react and cause a fire.

The sub-surface fires at dumpsites result from air filtration into the waste mass. The waste and the methane generated in the landfill act as fuel. Since the fire is below the surface, it is difficult to detect, gauge its extent and extinguish.

Some visual indications of subsurface fires include sudden subsidence and depressions, fissures and cracks, venting holes and rills as well as smoke.

The conditions at the Ghazipur site contribute to the occurrence of both surface and sub-surface fires. Unsustainable landfill operations, including dumping of mixed and uncompacted waste without soil cover, accommodate air circulation through the waste. Spontaneous combustion may occur depending on the materials present as well as moisture and temperature conditions.

Un-segregated and reactive waste is haphazardly disposed of at the Ghazipur site; hot loads and explosive gases like methane are present; and temperatures are elevated.

It is now imperative for the authorities to understand that these kinds of hazards can only be prevented by adopting sustainable waste management practices with a particular focus on sustainable “landfill operations”.

Installation of gas vents (methane collection and treatment mechanism) could be one of the interim measures for controlling methane gas accumulation. The key consideration for ensuring sustainable landfill operations such as minimising the dumping of unsegregated waste (mainly wet biodegradables), regular compaction of waste and soil cover should be practiced to avoid fire hazards.

Compaction of waste is important to remove the air pockets in the waste heap, which can otherwise accumulate methane.