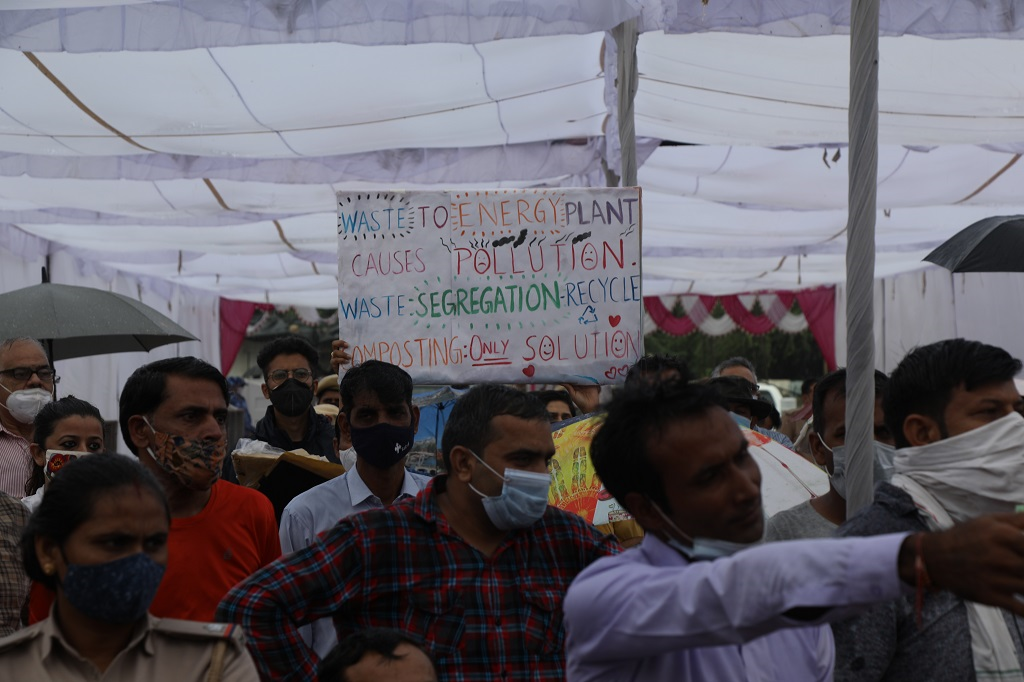 Residents gathered in hundreds at the public hearing on the expansion of Bandhwari waste-to-energy plant. Photo: Yatin Verma / Aravalli Bachao

Over 200 villagers from Mangar, Bandhwari, Gwal Pahari and Gurugram and representatives of 25 residents’ welfare association (RWA) raised concerns last month over the Bandhwari waste-to-energy (WtE) project. They had gathered at the site for the public hearing on expanding the energy generation capacity of the plant to 25 megawatts (MW) from 15 MW.

The environmental impact assessment (EIA) report was made available only three days before the public hearing, instead of the 30 days mandated by law, the residents complained.

In 2018, the contract to develop the WtE plant was awarded to a private firm Ecogreen. The plant was supposed to be operational by June 2019 but very little progress has been made so far, the RWA representatives pointed out.

The concessionaire took over the management of the bio-remediation landfill in 2017 but continued dumping untreated waste and adding to the 7-metre heap of legacy waste that has swelled to 45 m in the last four years, highlighted Monika Khanna Gulati, resident of Nirvana Gurugram.

Most of the demonstrators were from villages and townships along the ecologically sensitive Aravalli range that has been encroached upon over the last few decades, putting a strain on the region’s ecosystems and resources. The volume of garbage at the landfill will keep increasing as the population in these satellite cities around Delhi grow steadily and the areas urbanise rapidly, experts said.

The environmental clearance to construct a WtE plant in the Aravallis was based on incorrect information provided by Gurugram Municipal Corporation and Ecogreen as concluded from responses to Right to Information (RTI) petitions, Vaishali Rana, a resident of Gwal Pahari, pointed out.

Studies by the Central Pollution Control Board and the National Environmental Engineering Research Institute pointed out that water in five villages adjacent to the landfill is contaminated, up from three some years back, she added.

The quantum of non-combustible waste brought to the landfill to earn more tipping fees would render any WtE plant inoperable, according to Almitra Patel, member of Supreme Court Committee for Solid Waste Management and national expert, Swachh Bharat Mission, Government of India.

The (NEERI) study on Bandhwari clearly shows that the soil and groundwater within a 5km radius of the Bandhwari dumpsite are highly contaminated. The EIA report, however, shows no reference to the NGT order or the recent NEERI groundwater quality assessment.

Ecogreen has not been segregating waste to save costs and is completely incapable of managing solid waste, the residents protested. But MCG has refused to remove them as the concessionaire despite repeated complaints.

The company’s dereliction has led to it being left with WtE plant as the solution for tackling the mountain of garbage at the landfill, residents rued. But the process involves burning of garbage, which will pollute the air, decrease forest cover and hurt ecosystems, according to experts.

The meeting was attended by officials from MCG, Ecogreen and the Haryana Pollution Control Board.