National Consultation on Rural Sanitation calls for triggering mindset change, but lack of credible data on health and sanitation is a challenge 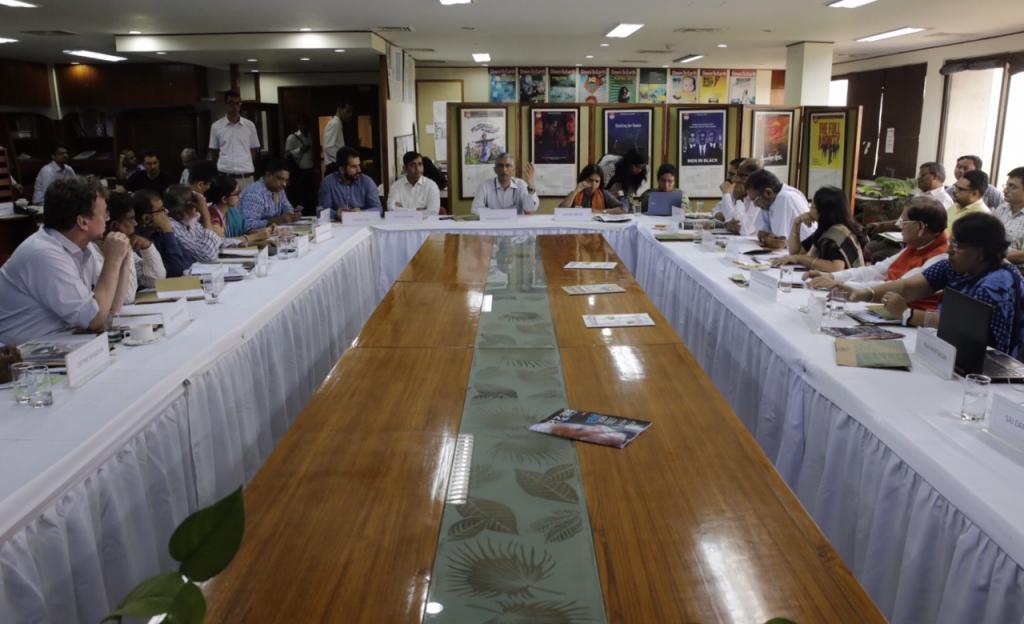 Panelists were unanimous in their opinion that the SBM has always been about toilets, numbers and incentives, but not about mindset change. Credit: Vikas Choudhury/ CSE

We need to look beyond toilets and establish a connection between sanitation and health in order to trigger a mindset change in rural India. This is one of the key takeaways from the National Consultation on Rural Sanitation, hosted by the Centre for Science and Environment (CSE) in New Delhi on October 6.

Laying bare the concerns related to poor sanitation in India, Sunita Narain, the director of CSE, said that we need to answer a fundamental question: how does the waste get treated? “The government’s emphasis should be on safe disposal of waste and not just building toilets and sewage treatment plants,” she observed. On this note, Sunita announced that the CSE is setting up an independent faecal sludge testing laboratory.

Parameswaran Iyer, secretary in the Ministry of Drinking Water & Sanitation, spoke about making the Swachh Bharat Mission (SBM) a success by treating it not as a sarkari programme but as a jan andolan (people’s movement). While claiming that more than 100,000 villages have been made ODF in the last two years, he added that verification of these villages has been done through third parties.

Explaining the concept of Swachh Gram, Iyer pointed out that any village that is open defecation-free and has effective solid and liquid waste management mechanism at place will be declared a clean village. “The government will introduce a self-rating system in all the 650,000 villages in India wherein the panchayat will rate a village every six months. The members of the panchayats will receive some training to assess the sanitation situation, following which third-party verification will be conducted in assistance with the World Bank.

Taking cue from Joe Mediath, Founder of Gram Vikas, who raised the issue about privacy for women during bathing and building a bathroom along with toilet, Srestha Kumar from International Center for Research on Women (ICRW) said that there is a gender gap in the way we look at solving sanitation problem. “Women are being shamed and discouraged to defecate in the open, while men go out in the open and defecate. How can we expect to make a village ODF when male members don’t embrace this shift? Moreover, availability of water is also an issue because ultimately, it is the women who have to walk miles and fetch water for using in toilets,” said Sreshtha.

The general opinion that emerged from the discussion is that there is not enough disaggregated and conclusive data down to the village level. “Each sector is collecting data in its own way and they are working in silos. That’s why there is no concrete data on health and sanitation, said Madhumita Dobe, Director- Professor (Public Health) at All India Institute of Hygiene & Public Health, Kolkata.

“We want tangible information on open defecation, sanitation and water-borne diseases to bring change in people's mindset. Since water-borne diseases have been denotifed, it has become a struggle to find data about them. Without data we can’t establish a viable argument,” said Sunita.

Clear wins and challenges in districts

Kamal Kar, Founder & Director of CLTS Foundation, referred to Ahmednagar and Nanded districts of Maharashtra where community-led total sanitation is now a reality. For him, this was made possible because of the commitment to construction of toilets shown by the villagers, who even refused to accept government subsidy in return. “Peer pressure also worked when it comes to making districts open defecation-free. They also mobilised resources and brought the unused toilets into use,” said Kamal.

But an open defecation-free campaign can fast lose steam if villagers don’t cooperate with local administration. Highlighting the challenges that district authorities face in sustaining such a campaign, Sumedha Kataria, District Collector, Kurukshetra, said, ‘You have to do constant hammering and constant checks to keep people motivated and bring that social change.”

While Sunita called for a common work plan to improve sanitation issue in India, Madhumita emphasised the need to involve the Health Ministry to ensure we have “convergence of thought” on tackling waste management, open defecation and water-borne diseases. “In Bangladesh, sanitation status of a village used to be assessed by the number of cholera and diarrhea cases reported in nearby hospitals and health centres,” said Kamal taking a leaf from his experience of working in the country.

Behaviour change needed but not with a coercive approach

The panelists were unanimous in their opinion that the SBM has always been about toilets, numbers and incentives, but not about bringing a change in the mindset of villagers.

According to one of the panelists, the government’s biggest mistake has been to take responsibility on behalf of the people to trigger behaviour change. The authorities arbitrarily decided to thrust technology on people and focussed only on construction of toilets.

“Indian Constitution says sanitation is a state subject. So let’s leave sanitation to panchayat and state and don’t let the Centre prescribe an approach. Right now, the Union Government is thrusting its policies on all the districts without understanding that one-size-fits-all approach cannot work. That’s why there is a need for behaviour change at the level of policymaking,” asserted Deepak Sanan, Former Additional Chief Secretary, Government of Himachal Pradesh and advisor to the CLTS Foundation.

Sanan also added that SBM has been chasing toilets—a private good—but it has ignored the behavioural change—a public good, which is essential to improve sanitation situation.

But there is a danger in adopting a coercive approach to force people to have toilets since it may create a division within the community. “Shaming people in public, not marking students’ attendance in school and not allowing villagers to vote in local elections for defecating in the open are not the way to trigger a change in mindset,” argued Arundati Muralidharan of Water Aid.

Besides talking about the focus on collective behaviour change, Anowarul Haq, director of CARE, Bangladesh, pointed out how the country opened market for sanitation accessories. Manu Prakash, executive director at TARU Leading Edge, noted that while there has been a huge hike in money spent on SBM but there is no invest in sanitation market.