How Baddi pharma waste can make your medicines ineffective

The waste contains active ingredients used in antibiotics and may be contributing to the spread of antimicrobial resistance. It is time to treat pharma waste more rigorously. 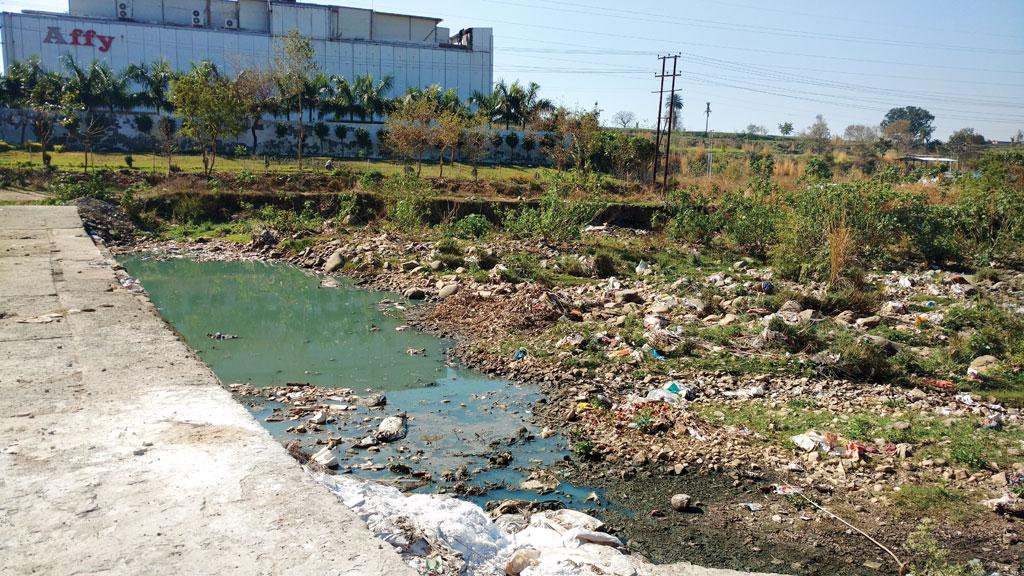 Spread over 380 square kilometres in Himachal Pradesh’s Solan district, the Baddi-Barotiwala-Nalagarh (BBN) industrial area is one of India’s largest pharmaceutical manufacturing hubs. The region hosts around 500 small, medium and large pharma units and accounts for 35 per cent of Asia’s total medicine production. But rapid industrialisation and a lax attitude towards safe disposal and management of pharma waste have raised concerns about the effects of pollution on the environment and health.

The water of the Sirsa river, which flows downstream through Baddi, is black and emanates a foul odour. In Jharmajri village, which has the largest number of pharma units, resident Balvinder Thakur points to an open area where solid waste has been burnt. The burnt waste, which contains medicine wrappers, flows along with wastewater into a dirty canal nearby. “All of this is going to the river,” he says. Pharma manufacturing units are required to send their solid waste to the treatment, storage, and disposal facility (TSDF). But people in the area allege that pharma units sometimes do not comply with these norms. “To cut down on costs, waste is given to scrap dealers who visit plants. They dump the waste in open areas or burn it,” says J S Dukhiya, president, Him Parivesh Environment Protection Society, a non-profit based in Nalagarh.

Liquid waste from these units is also discharged through pipes and other outlets that open behind the plant or run underground and open into bushy areas. This released wastewater accumulates in or flows through nallahs, canals and rivulets into the Sirsa river. “Effluents are also injected into the ground at night by digging bore wells or released during rains,” says Balkrishna Sharma, another activist.

Due to such practices, the BBN region remains prone to antibiotic pollution. Many companies manufacture formulations, or finished products such as tablets and syrups. Some companies also manufacture active pharmaceutical ingredients (APIs) or the main biologically active ingredient used in formulations, including antibiotics. These APIs can enter the environment due to insufficient treatment or improper disposal of waste and weak environmental regulations. They are among environmental persistent pharmaceutical pollutants which have not degraded completely during treatment. They may influence the genetic makeup of bacteria, leading to the survival of resistant bacteria and spread of antimicrobial resistance (AMR), a public health threat.

Delhi-based non-profit Centre for Science and Environment visited the BBN area to study pharma waste and found that only a part of the waste generated was being subjected to the most rigorous standards. Companies employ different kinds of effluent treatment techniques based on factors such as the volume of waste discharge and the size of the company. For instance, large- and some medium-scale manufacturers, such as DSM Sinochem Pharmaceuticals (DSP), Cipla Limited and Penam Antibotics, say theirs are Zero Liquid Discharge (ZLD) plants. In a ZLD plant, wastewater is vapourised and the residual concentrate is incinerated at 1,100-1,150°C, the temperature at which all APIs are said to typically degrade. ZLD plants may also have advanced tertiary treatment processes and the treated wastewater is reused in horticulture or cooling towers. No water leaves the plant, hence the name. Though such disposal practices are driven by international regulatory requirements, there is no mechanism to check their regular functioning.

But ZLD plants require huge investments. An official at Morepen Laboratories Limited explains that setting up a state-of the-art wastewater treatment plant (WWTP) such as ZLD for a large manufacturing plant costs R3 crore, with monthly operational expenses of R10 lakh. A similar smaller setup would cost about Rs 1.5 crore. “Medium-scale manufacturers invest in such infrastructure, but to save operational expenses, they may not operate 24x7 for 365 days a year,” says Suman Sharma, marketing director, DSP. Small-scale industries cannot afford such WWTPs. “For them, setting up such a system could be costlier than the plant itself,” says T R Gopalakrishnan, deputy secretary general, Indian Drug Manufacturers’ Association. ZLDs also require space and skilled staff. Given these requirements, small units may not treat waste properly, he adds.

Small-scale manufacturers generally use conventional effluent treatment plants (ETPs) which involve primary and secondary treatment. “Treated wastewater is drained into nullahs or lands nearby only after water quality standards have been met,” says a representative from Aarge Formulations. Some use it for gardening or in fish tanks. All of this allows entry of residual APIs into the environment. 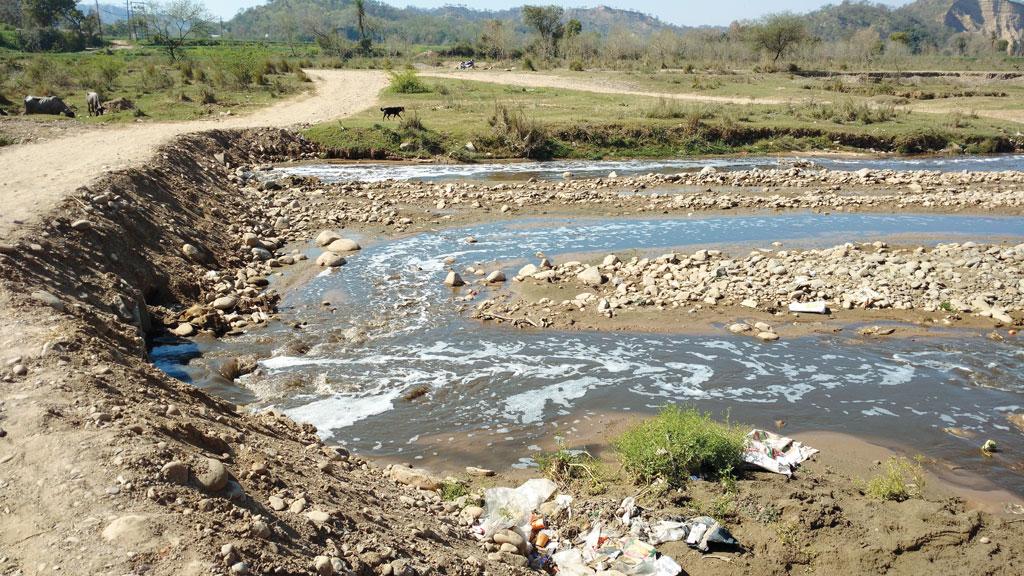 All industrial units, including those with no ETPs, are required to send effluents to the common effluent treatment plant (CETP) through pipelines or tankers. The CETP in Baddi, which became operational in 2016, drains treated wastewater into the Sirsa river. It is supposed to treat 22.5 million litres per day (MLD), 13 per cent of which comes from pharma units. But the CETP is not working to its full capacity. A pollution expert from the Himachal Pradesh Pollution Control Board (HPPCB) says that the CETP currently receives only about 14-16 MLD of effluents. Industries send either none or only part of the effluents to minimise the cost of CETP membership fees. A Supreme Court judgement in February 2017 directs all industries to have primary ETPs for them to have a valid Consent to Operate. The petition, filed by Gujarat-based non-profit Paryavaran Suraksha Samiti, raises the issue of pollution due to industrial non-compliance of standards, regulatory weaknesses, and inadequacies in CETP design and treatment.

While HPPCB has notified industries, some say they are still not aware of it.

HPPCB also admits to occasional violation of the rules by companies. A HPPCB official says, “Small industries sometimes flout laws and drain untreated effluent to cut costs. By the time we receive the complaint and reach the spot, it is too late.” In case of violations, power supply to the unit is disconnected. “But industries still use diesel generators to run plants. HPPCB officials are busy with administrative work and have less time for monitoring,” says Raja, a resident from Baddi. But the fact remains that neither the primary and secondary ETPS nor the CETP is designed to effectively remove APIs from waste.

Anti-infectives, such as antibiotics, antivirals and antifungals, occupy the largest share in the Indian domestic market, making the pharma industry an important contributor to AMR in India. A Swedish study published in Journal of Hazardous Materials in 2007 found high levels of fluoroquinolone (a critically important class of broad-spectrum antibiotics) in treated effluents from a CETP in Patancheru, near Hyderabad. When the Central Pollution Control Board (CPCB) and the Andhra Pradesh PCB reinvestigated in 2009, they found ciprofloxacin (a fluoroquinolone drug) residues in the CETP effluents. When they tested again in 2010, no residues were detected. Dinabandhu Gouda, additional director, CPCB, says, “AMR can be an issue in the long term. But the level of evidence required is not there. There has to be enough evidence linking API production to AMR, for CPCB to initiate any action.” However, scientific evidence is gradually building up.

In 2016, researchers at the Indian Institute of Technology Hyderabad reported high levels of fluoroquinolone residues in water and sediment samples of the Musi river, which receives effluents from WWTPs around Hyderabad. Another study, published in Infection in April 2017, shows that water samples from the direct environment of bulk drug manufacturing facilities were contaminated with antimicrobial pharmaceuticals and resistance genes. Resistant bacteria in samples from different manufacturing sites across India were also reported by international agency Changing Markets in 2016. But pharma companies shrug off such findings. “Contribution of the pharma sector to antibiotic pollution and AMR is much less. Major contribution is from antibiotic overuse in humans and self-medication,” says Ramesh Adige, former executive director, Ranbaxy.

Until now, researchers have chosen Hyderabad for scientific studies as it is a hub for bulk drug manufacturing. But in 2016, Union Minister for Chemicals and Fertilizers Ananth Kumar announced the creation of a Bulk Pharma Drug Park in Baddi. Thus, the threat of AMR due to APIs in the environment will be present as Baddi expands manufacturing capacity. Focus on the environmental dimension of AMR has increased globally and nationally in the past months. Recognising the role of the pharma sector, 13 global pharma companies signed a declaration to address the environmental impact of manufacturing discharges at the United Nations General Assembly 2016. India’s National Action Plan on AMR, finalised in April 2017, stresses on tackling AMR in the environment (see ‘Guiding star’).

It is important that all gaps leading to the release of APIs in the environment are plugged. The discharge of pharmaceutical effluents should take place through proper waste management techniques and stringent environmental regulations. Currently, effluent standards are limited to chemical contaminants such as heavy metals. The government must adopt a new AMR-centric approach of waste management which considers APIs as a chemical contaminant. Laws must be made to ensure that there are no APIs in treated effluents. The government should support small-scale manufacturers to install and implement environmentally sound waste treatment and disposal techniques. Manufacturers with high-end WWTPs should also be strictly monitored. The SPCBs should conduct surveillance of APIs or antibiotic residues in the treated effluents and make data publicly available.

This story was first published in the May 16-31, 2017 issue of Down To Earth magazine under the headline "Bitter Medicine".