CSE study recommends that Agra must develop a number of strategies to reduce the impact of petha-making units on its environment and especially, the Taj Mahal 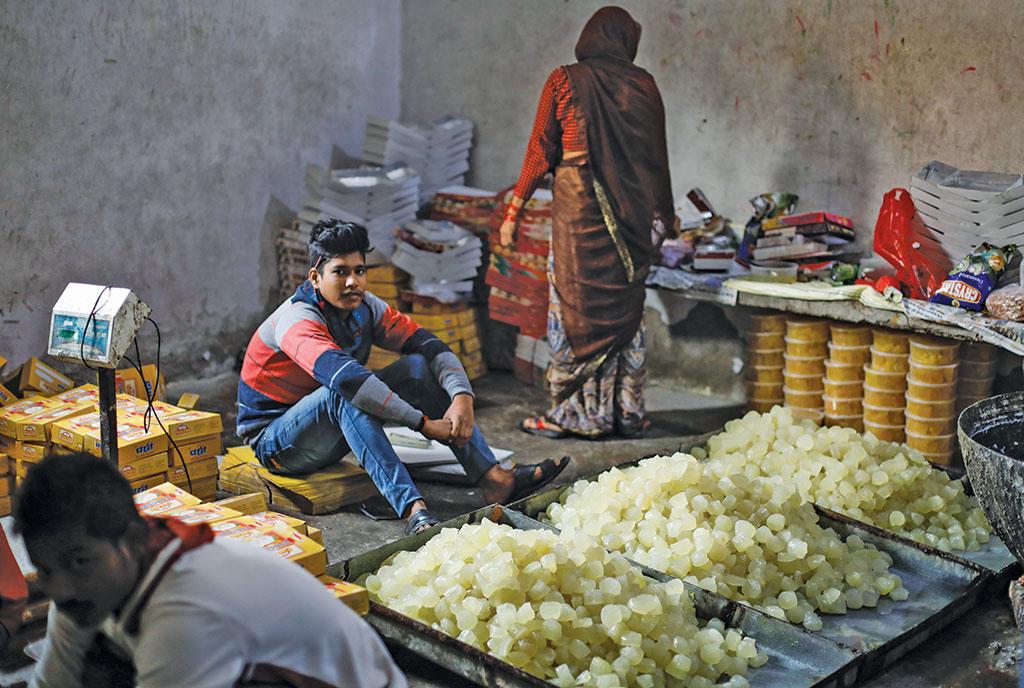 Despite efforts to shift polluting industries away from the area around the Taj Mahal, several petha workers operate near the monument

Agra is known as the city of the Taj Mahal across the world. But for food lovers, it is also the destination for a unique sweet — petha, a soft, translucent candy made from ash gourd or winter melon (Benincasa hispida).

The recipe of Agra ka petha (Agra’s petha) is believed to have slipped out of the royal kitchen of Mughal emperor Shah Jahan. Over the years, its popularity has given rise to a full-fledged industry in this historical city, located on the banks of the Yamuna in Uttar Pradesh.

Until 2013, there were over 700 big and small units manufacturing the sweet, according to the Petha Association of Agra. Researchers from the Sharda University in Greater Noida, Uttar Pradesh, estimate that the number could be higher at around 1,500 — several units are not registered with the Agra Municipal Corporation and hence remain unnoticed.

The number of petha-making units has, however, dwindled following the outbreak of the novel coronavirus disease (COVID-19) pandemic. In April 2021, Delhi-based non-profit Centre for Science and Environment (CSE) conducted a survey of Agra and found that multiple lockdowns and economic losses over the past two years have left only 130 units in the city. While their decline denotes a cultural loss for Agra, the study also highlights a grimy picture of the petha industry.

Though regarded as the purest form of sweet by the local residents, given that its primary ingredients are just fruit, sugar and water, petha leaves behind a plethora of waste for disposal and also causes pollution.

Agra cannot aim to eliminate its waste and protect its residents and the monument without looking for sustainable ways to deal with mounting petha waste, warns the CSE study.

Broadly, petha waste can be categorised into raw waste, which includes the peels and pulp of the ash gourd, and the petha that is left unconsumed or has reached the end of its shelf-life.

While the second category forms a meagre portion of petha waste, as the sweet is usually made to demand, some 60 per cent of the fruit is wasted during manufacturing. CSE researchers estimate that petha waste accounts for two-thirds of the sweet produced every day. 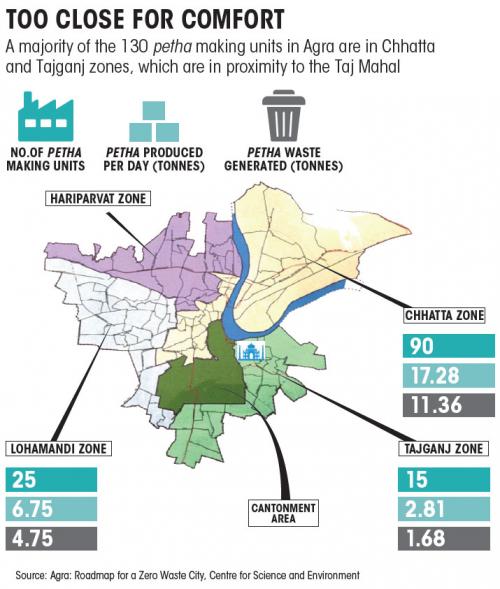 Of the four zones managed by the Agra Municipal Corporation, Hariparvat zone did not have any petha-making units at the time of the survey by CSE researchers and Lohamandi had 25.

Chhatta and Tajganj zones, which are in close proximity to the monument and are densely populated, together hosted the maximum 105 units. Chhatta, which is home to maximum number of units, produced 17.28 TPD of petha and generated 11.36 TPD of waste, followed by Lohamandi and Tajganj.

Such high amounts of waste call for implementation of proper disposal mechanisms by both the manufacturing units and the Agra Municipal Corporation, which is largely insufficient.

The irregularity of services by the Agra Municipal Corporation to collect the waste has led to an accumulation of raw petha waste at most units.

Some 38 per cent of the units openly dump the waste on the streets or in dhalaos (three-walled structures used for waste collection), shows the CSE study.

“Such unauthorised dumping of petha waste leads to a foul smell in the area and attracts disease-borne vectors that infect nearby residents,” says KK Pandey, project manager at the corporation’s Swachh Bharat Mission unit.

Wherever the municipal corporation does collect the waste, it is mixed with other non-biodegradable waste from across the city and dumped in landfills.

“I have been living here for over four decades and have gotten used to the foul smell of rotten petha waste that chokes the drains and makes them a breeding ground for mosquitos,” says Navratan Singh, a resident of Noori Gate Road in Chhatta zone.

Only a few units hand over the petha waste to gaushalas or cattle farms in the city to be used as livestock feed, notes the study.

Ash gourd is nutritious and hence is a good addition to cattle feed. Since petha waste is biodegradable, it can also be repurposed as compost. In the absence of a formal supply chain from petha-making units to farms, this practice remains somewhat disorganised.

The other concern for the Agra Municipal Corporation is the air pollution caused by the petha makers. Making petha entails boiling of water and coal is invariably the preferred fuel for most units.

Science has already established that emissions from the burning of coal or coke in industries and other fossil fuel sources such as diesel-based generators or vehicles are discolouring the Taj Mahal’s brilliant white facade.

Despite the establishment of a 10,400 sq km around the monument as the Taj Trapezium Zone, within which emissions are supposedly strictly controlled, there has been a marked deterioration in the Taj’s condition over the last few years.

Through multiple orders spanning nearly two decades, the Supreme Court has ordered the Agra Municipal Corporation to prohibit operations of polluting industries near the Taj Mahal and facilitate their shift to cleaner fuels such as liquefied petroleum gas and compressed natural gas.

However, in lieu of providing measures to adopt cleaner fuels, the corporation in 2012 proposed to shift the petha units to Kalindi Vihar, which is 11 km from the main city.

Although some units did make this shift, most of them could not sustain their businesses there as water in the region was much harder and turbid than suitable for the petha-making process.

The units were forced to buy water from the city, which was not sustainable. Hence they either relocated or shut down operations. 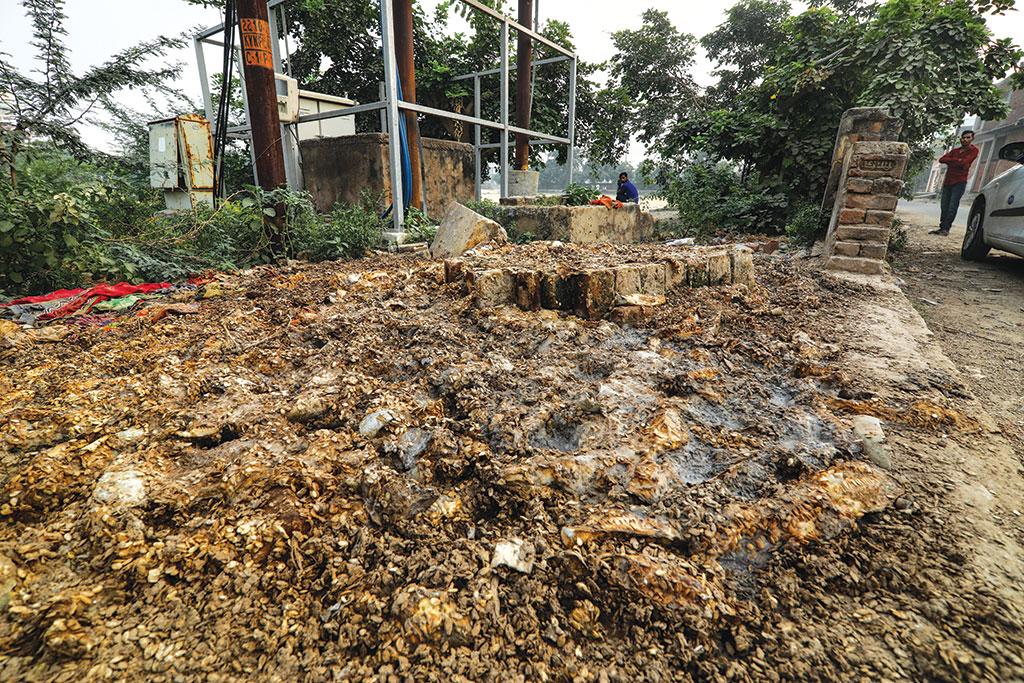 “The petha business has been severely affected by the ban on coal, relocation order of the units and now due to the COVID-19 pandemic. Some 70-80 per cent of petha units have either shut down or shifted out of the city,” says Rajeev Goyal, owner of Ujjawal Petha Store in Chhatta zone.

With the decline in COVID-19 cases, more petha makers are expected to resume business. They are mostly setting up their units around the monument for ease of business and to maximise profits.

This may exacerbate the problems of waste generation and air pollution. The CSE study lists out measures the corporation can take to holistically tackle the concerns.

The Agra Municipal Corporation must tackle the environmental impacts of petha making on multiple fronts. First, it must move forward with its relocation scheme by ensuring that all units move to the designated area in Kalindi Vihar. It can achieve this by providing basic facilities such as high-quality water and electricity at these locations.

In the meantime, the corporation must formally register all petha units that open in the city. Currently, there is no database of petha makers with the authorities and so they must initiate an area-level drive to ensure all petha-making units currently open are registered, pay taxes and receive the trade license certificate.

Supervisors should thoroughly inspect their respective area to identify new petha makers expected to come up soon and repeat the registration process with these as well. The municipal corporation can also geo-tag the locations of existing units to facilitate ease in monitoring and to find new units that may spring up unnoticed.

Hence, like other bulk waste generators, petha makers should be held responsible for managing their waste on their own. In the absence of a mechanism for processing waste on-site, they may sign an agreement with the corporation or authorised entities for collection, transportation and treatment of petha waste in a sustainable manner.

Fourth, the practice followed by a few units of transporting waste to cattle farms can be formalised. Agra has 300 cattle sheds and 24 cattle farms — the latter alone can use up to 25.68 TPD of petha waste, the study says, which is much higher than the current rate of 17.8 TPD. This makes this supply chain a sustainable, long-term solution.

However, if this mechanism does not work for all units, processing the waste through decentralised composting or bio-methanation could be the next-best possible option.

The Agra Municipal Corporation should ensure that petha makers have a captive facility for bio-methanation to process the waste within their units. Biogas produced from the waste could be used by the petha makers as an alternative to coal. This way, the waste could actually be a source of clean fuel.