The Okhla plant in Delhi is one of India's four functional waste-to-energy plants, but people in nearby areas have moved court saying the stench is unbearable (Photo: Chinky Shukla)

In a major departure from India’s solid waste management policy, NITI Aayog, the government’s main policy advisory body, has stated that biogas and composting are not sustainable disposal solutions because they generate large volumes of residues and by-products. In its Three Year Action Agenda 2017-18 to 2019-20 released in August, the Aayog has suggested that municipal solid waste be burnt to produce energy.

As of July 2017, thermal-based waste-to-energy (WTE) plants in India have the capacity to process 5,300 tonnes of garbage and produce 63.5 MW per day. According to a 2015-16 report by the Ministry of New and Renewable Energy (MNRE), this capacity can be enhanced to 1,075 MW by 2031 and to 2,780 MW by 2050. The new policy seeks to increase energy generated from solid waste to 330 MW per day in the next five months, an over 400 per cent increase from the current installed capacity, and to 511 MW by 2018-19. To this end, five WTE plants are already under-construction in the country and tenders have been floated to build another 47. But is this feasible? India’s experience with WTE plants suggests otherwise.

What’s worse, most of the collected waste is unfit for incineration (see ‘Ill-conceived plan’).

There is no countrywide data, but Delhi, for instance, produces 10,500 tonnes of waste a day, of which just 1,300 tonnes is suitable for incineration. The rest can be composted, recycled or processed through biomethanisation.

The low calorific value of the waste is due to the presence of a large organic fraction (40-60 per cent), ash and fine earth (30-40 per cent), paper (3-6 per cent) and plastic, glass and metals (each less than one per cent), says a 2011 Central Pollution Control Board report. Since segregation of waste at source in India is minimal, wet waste gets mixed with dry, reducing its calorific value. A 2017 report by GIZ, a German government agency working on waste and sanitation, states that mixed municipal solid waste in developing nations is by its nature different from that in industrial countries and has specific characteristics in every city. This diversity must be considered in any technology assessment.

But most of India’s plants burn mixed waste, and even need auxiliary fuel to run their operation. This is one of the reasons behind the expensive power they produce. A unit of electricity produced in thermal or coal plants costs R2-4, while that produced in thermal-based WTE plants costs about R7. No wonder eight of the 12 incineration plants set up in India so far have shut shop and only four are operational (see ‘Incineration zone’). 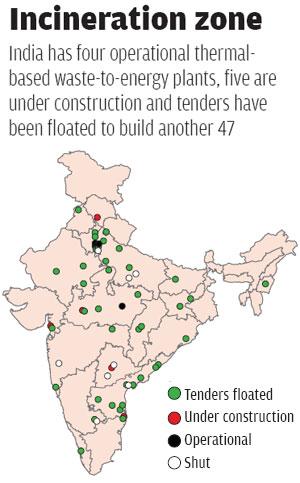 Moreover, as per an order passed by the National Green Tribunal on March 20, 2015, the compostable fraction cannot be used for burning and should be used for compost or biogas. The order also states that the recyclable portion has to be sent for recycling (some products have high calorific value but when burnt they release highly toxic gases) and only the non-recyclable, non-biodegradable waste (textiles, non-recyclable plastic, ceramic) can be sent to these WTE plants. “Not only are our processing capacities low, we haven’t shifted our focus from using land for dumping waste to using it for processing waste in a decentralised manner,” says Shibu Nair of Thanal, a non-profit based in Kerala, working on decentralised waste management options.

The concept of producing power from waste first emerged in the 1980s when disposal of waste became a colossal problem for municipal authorities. But the first plant set up in Timarpur in Delhi in 1986 was shut soon after its commissioning due to costly power it produced and shortage of suitable waste. Still several governments were seeing such plants as a magic solution, with many countries in the West running waste-to-energy projects successfully.

The first time waste-to-energy plants came under scrutiny in India was in 2005 when the Supreme Court asked a 14-member committee to look into the non-operational plants in Lucknow and Hyderabad. In 2007, the apex court asked the Ministry of New and Renewable Energy to set up five plants on pilot basis. Of the five plants set up, two could not be completed due to shortage of funds and one shut down within six days since the technology was unsuitable. The two operational plants are in Delhi but have not had much success. People have protested setting up the plant at Okhla and took the issue to court. The other plant, at Ghazipur, runs for only 15 days a month because of unsuitable waste feed and high running costs. Officials, however, are still of the view that waste-to-energy plants can be run on unsegregated waste.

“The proposed policy neither takes into account the failure of incineration plants, nor the success of biomethanation plants in several Indian cities,” says Bharati Chaturvedi, founder and director, Chintan Environmental Research and Action Group, a Delhi-based non-profit. “It can also destroy the livelihood of 1.2 million people employed to collect and segregate waste in the informal sector,” says Shashi Bhushan, president of All India Kabadi Mazdoor Mahasangh.

“About 70 per cent of our waste is organic and burning it using extra energy is ridiculous. The solution for organic waste is biological disposal, not thermal. We need to opt for composting,” says Nair. “From decentralised composting in condominiums to zero waste campuses, there have been many success stories. Decentralised waste management is the future,” adds Chaturvedi.