It is just a gimmick to fool Dalits whereas their real problems are unaddressed, they say 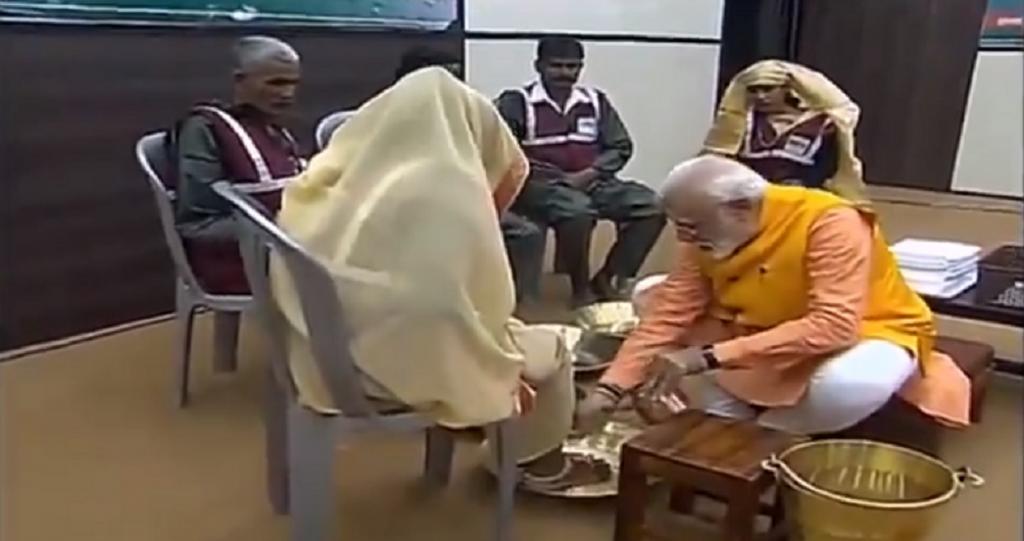 Prominent Dalit activists and leaders have decried Prime Minister Narendra Modi’s act on February 24, 2019, of washing the feet of sanitation workers as a ‘gimmick’ and ‘pure optics’.

Modi, after performing Ganga Arti at the Kumbh Mela in Prayagraj, had washed the feet of sanitation workers.

Stating that it was an emotional day for him, the Prime Minister said that washing the feet of santitaion workers and seeking their blessings had touched him and he vowed to "continue to work for them".

"They work from dawn to dusk but don't claim to credit or limelight for doing it. We hear about their commendable work back in Delhi," Modi said.

However, Dalit and sanitation activists were not impressed.

Bezwada Wilson, National Convenor of the Safai Karamchari Andolan in Delhi, that campaign for the rights of manual scavengers, criticised Modi’s act in a series of tweets.

In his book, Karmayogi, PM Narendra Modi talks of manual scavenging as a "spiritual experience". I urge him to ask a manual scavenger if s/he feels even remotely spiritual while cleaning other people's excreta. #StopKillingUs https://t.co/v33WlVspXh

Clean your mind not our feet, Mr. PM! Highest form of humiliation. 1.6 lac women still forced to clean shit, not a single word in five years. What a shame! #StopKillingUs https://t.co/Hs898ZJlT5

Speaking to Down To Earth, Wilson said, “I do not understand why the Prime Minister did this. This is purely for self-glorification. What will the sanitation workers get out of it?” he asked.

He also noted that on an average, 150 manual scavengers die annually, cleaning open sewers. “At least 105 died last year. And 137 died in the year before. And these are the documented cases. Many such incidents are not even documented.”

“The question is not of symbolism. Symbolism is necessary at times,” Paul Divakar from the National Campaign on Dalit Human Rights told Down To Earth.

“There are two things here. We want to eliminate the practice of manual scavenging in India. And then, there is a whole government programme called the Swachh Bharat Abhiyaan on which crores are spent annually. Swachh Bharat is mostly reliant on Dalit women sweepers. Total mechanisation of the process of cleaning waste is a prospect that is still far away in India. Till then, it will be Dalits, mostly women who would be shouldering the burden,” he noted.

Divakar added, “We should see to it that Dalits, who have been forced into cleaning sewers for no other reason than the sanction of the caste system, are accorded dignity of labour like those working for cleaning waste in other countries. And here, the Prime Minister needs to set an example in breaking these age old caste prejudices by the total elimination of this inhuman practice of manual Scavenging. Otherwise it remains a great optics but nothing more.”

Prakash Ambedkar, grandson of Babasaheb Ambedkar, was even more scathing in his criticism.

“This tradition, of washing the feet of the lowest of the low exists in Christianity, not in the ideology that the Prime Minister believes in. Has he become Christian?” he asked Down To Earth.

“The Prime Minister has never spoken about incidents in which Dalits were targeted during his reign. This is merely a gimmick. But it is not going to help him as Dalits know him, his ideology and that of his followers,” said Ambedkar.