Govt must get its hands dirty to rescue manual scavengers 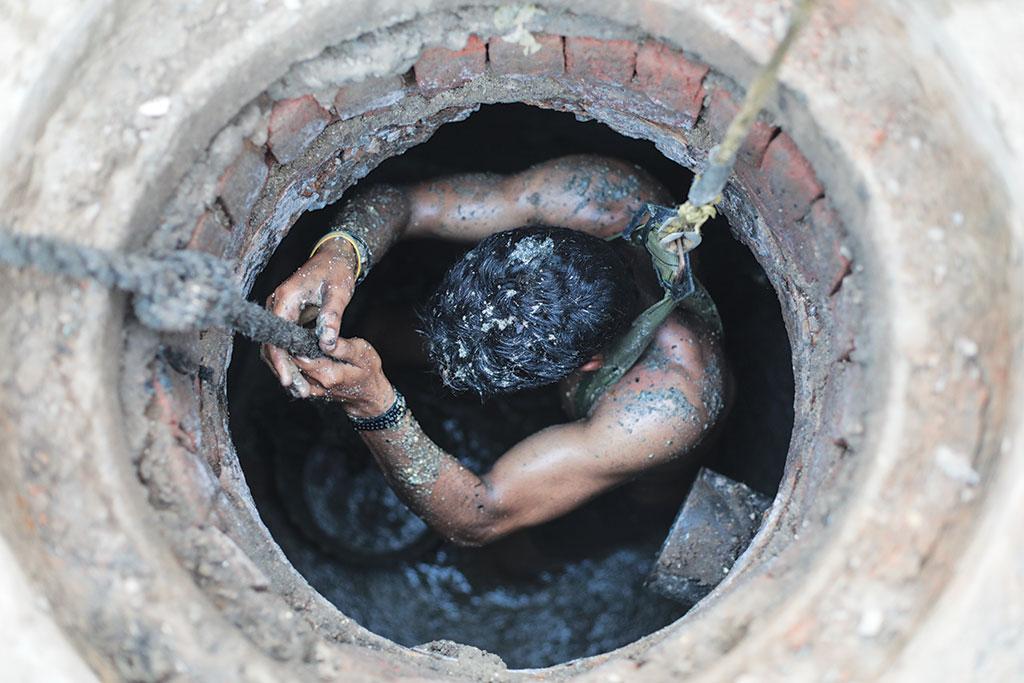 Estimates show some 5 million people in the country work as manual scavengers for a living (Photo: Vikas Choudhary)

It's nearing midnight. Twenty-six-year-old Lal Babar hurries along a dark alley winding around haphazardly built houses in Uttar Pradesh’s Mughalsarai district. He is accompanied by two others from his community of Domar. As soon as they reach the backdoor of a house, a man steps out and points to a concrete slab on the pavement. The trio quietly remove the slab and get down to work.

They take turns to remove the tepid, thick black fluid using buckets and dump it in a nearby drain. Soon the sludge becomes thicker and heavier. Lal strips down to his underwear and gets ready to descend into the manhole with a spade and a bucket. His knowledge of septic tanks, pits and drains is hereditary, passed on from father to son. But the heat and stench inside the pit always makes him dizzy. He gulps down a bottle of country liquor and starts scooping out the sludge with bare hands. One of his associates leans over the manhole to show him some light using his mobile phone, while the other pulls out the bucket and dumps the sludge on a cart lined with plastic. It takes them almost four hours to finish the job, after which they pick up the Rs 5,000 left by the family on the doorstep; slide the slab back; cover the sludge with another plastic sheet; and push it away towards a vacant plot or field where they can dump the sludge without being seen or caught.

During the day Babar works as a helper with the municipality’s sewer-cleaning truck. The truck is equipped to use high-pressure water and vacuum to clean clogged sewers and empty septic tanks and pits. “But they can’t enter narrow lanes. The hose pipes do not always reach the sewer lines. This is when our intervention becomes urgent,” he says, adding that some 100 people living in the shanties of Kali Mahal Marg in Chaturbhujpur earn a living through manual scavenging. Babar is aware of the hazards of his job.

Several people in his community suffer from skin diseases and tuberculosis. According to the Tata Institute of Social Sciences, 80 per cent of manual scavengers die before they turn 60.

Add to this the fact that the work is full of risks. Four contract workers fell to their death on January 1 this year while repairing a sewer line in Powai, Mumbai. The cable of the crane, which was lifting the workers from the manhole snapped, causing their deaths. A week later, three manual scavengers in Bengaluru died of asphyxiation, a common cause of death in this line of work. In September, within a week, six lost their lives in Delhi while cleaning sewers after inhaling toxic gases. Data with the National Commission for Safai Karamcharis (NCSK), a statutory body set up in 1994 by an Act of Parliament for the welfare of sanitation workers, shows 608 workers have died while cleaning sewer lines manually in the past 25 years. The number of cases are highest in Tamil Nadu, followed by Gujarat. But a reply by the Union Ministry of Social Justice and Empowerment to the Lok Sabha suggests the figure could be much higher. As per the reply, 300 manual scavengers died in 2017—an average of 25 deaths a month.

In 1993, India prohibited employment or engagement of a person “for manually carrying human excreta”. Two decades later, Parliament passed another law that reinforced the ban by declaring manual scavenging in all forms a criminal offence and ensuring the rehabilitation of manual scavengers. But repeated laws have failed to curb the caste-based profession. An ongoing survey by a Central government task force has so far identified 53,236 manual scavengers in 121 districts of 12 states. But a five-month study by international policy advisory firm, Dalberg, in 2017 shows the number could be as high as 5 million for the country.

Prime Minister Narendra Modi knows it very well that his flagship Swachh Bharat Mission (SBM), which aims a clean and open-defecation free India by October 2, 2019, cannot be achieved unless manual scavenging is eliminated. He has now declared to end the practice by 2019. But analysts say it would be difficult because of the way SBM is being implemented.

Safely managed sanitation requires going beyond the toilet and looking into the sanitation chain that includes containment, emptying, transport, treatment and reuse or disposal of faecal waste. Some of the technologies, such as twin-pits, provide on-site treatment. If correctly built and operated, decomposed faeces can be safely emptied and reused by households.

“Most toilets built since October 2014 do not have continuous supply of water and are not connected to sewers. These are not built using twin-pit technology, as claimed by the government,” says Bezwada Wilson, national con venor of Safai Karmachari Andolan (SKA), who has been campaigning to eradicate manual scavenging in thecountry. “Worse, some 86 to 90 per cent of the toilets have just single-pits. It means, every two to three years, the need will arise to empty them. But who will do this and how will it be done? The government has made no provision for this. Through SBM it is only creating a legacy that perpetuates hazardous cleaning,” he says.

Researchers at Delhi non-profit Centre for Science and Environment (CSE) recently visited Uttar Pradesh to understand how the state is managing its faecal sludge. They say in Allahabad, which is on the riverbank, almost 70 per cent people depend on on-site sanitation systems and use pits and septic tanks that have design flaws. Almost 14 per cent use just sealed tanks without any outlet for supernatant. These get filled within six months to one year. Most depend on motorised equipment or manual scavengers for emptying these. 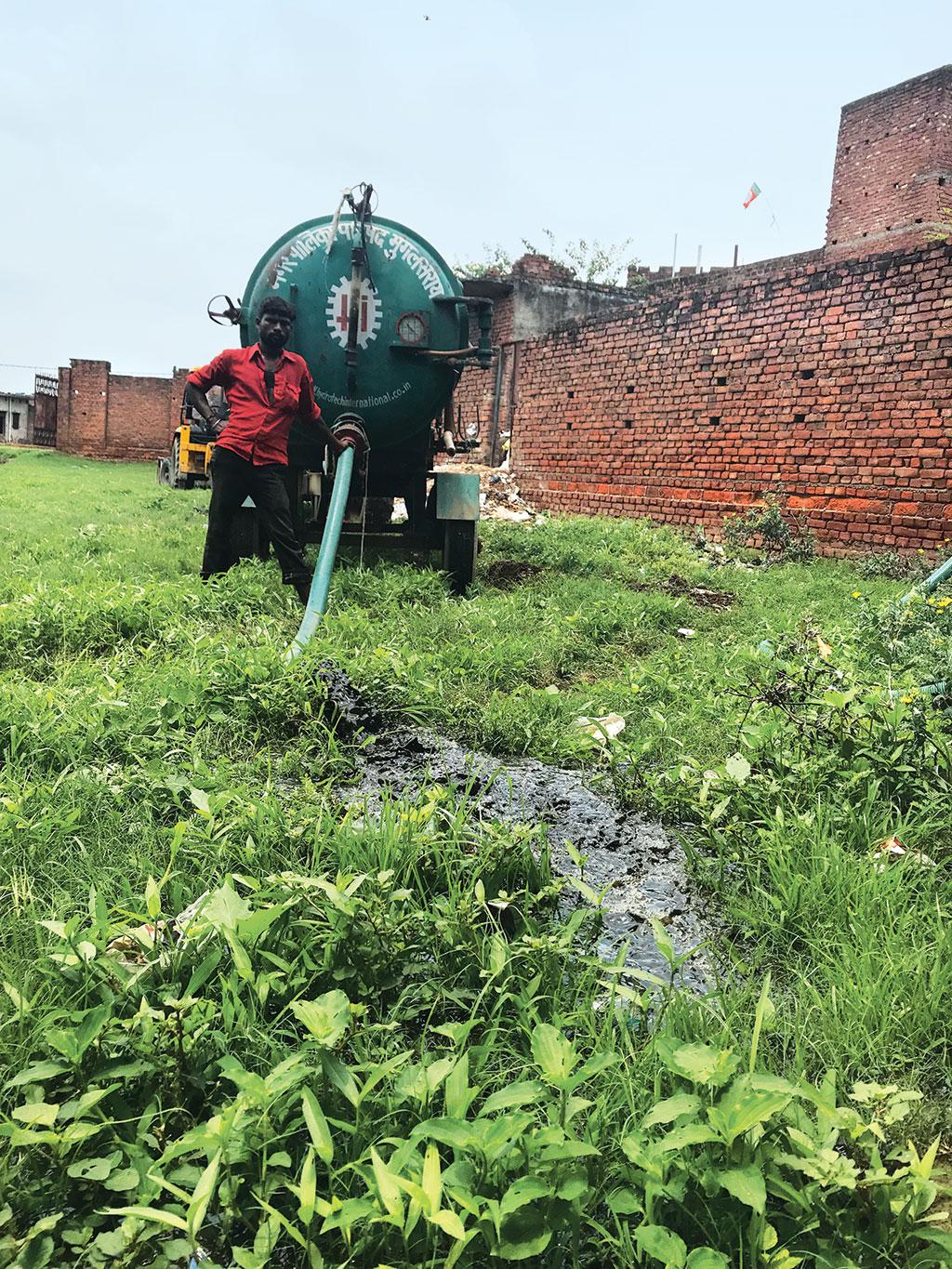 Avinash Kumar, policy head, WaterAid India, says almost 5.78 million toilets across the country are now connected to either single pits or faulty septic tanks. “I doubt if the government can handle such a huge load of additional sewage,” says Kumar.

The Ministry of Drinking Water and Sanitation, responsible for implementation of SBM (Gramin), says in its guidelines that faecal sludge management should be an integral part of ODF verification. But its dashboard does not show if a village has been able to manage its faecal sludge. SBM (Urban) has deferred the responsibility and introduced ODF++ protocols, which are to be adopted on a voluntary basis.

At a recent meeting, Kumar says, the government has admitted 65 per cent of the toilets built under SBM have single-pits, and that there is an urgent need to retrofit single-pit toilets, improve septic tanks and make provisions for faecal sludge management.

The case is no different for areas connected to sewer network. “Manual scavenging is a result of improper drainage system,” says Wilson. To make a sewerage network effective, underground drains needs to be extended to every nook and corner of the country. But no city is entirely covered by sewerage network; in the national capital 60 per cent of the population is covered with sewerage network; Chennai has the maximum 90 per cent coverage. In such areas, Wilson explains, storm water drains are usually connected to the sewer network.

As the debris and sediments enter the network, it results in clogging.

“We need to understand that the sewer network in India is not desig ned to carry both sewage and storm water,” says Suresh Kumar Rohilla, senior director at CSE. “While the government is emphasising on sewer network through programmes like Atal Mission for Rejuvenation and Urban Transformation (AMRUT) and Smart Cities Mission, there is neither emphasis on sustainability of the system nor protection of sanitation workers.”

Time to switch to roboholes

In Kerala, a team of four young engineers, inspired by sci-fi movie Avatar, have prepared a robot that can clean 400 manholes in a month. Dubbed, Bandicoot, the semi-robotic device has spider-like hands that can enter deep into the manholes irrespective of its width and depth, collect waste from the bottom of the sewer lines and remove clogs like a manual scavenger. It can also position itself with a jet pressurised with water to clean the pipes. “Its functional capability is similar to that of the tasks performed by humans,” says Arun George, co-founder of the company Genrobotics. So far, they have delivered seven Ban dicoots to municipalities in Kerala, Tamil Nadu and Andhra Pradesh and plan to launch one in Delhi on Gandhi Jayanti. Since designs of manholes and sewerage networks differ from city to city, Genrobotics customises the robot to suit the requirements of the municipality. George says his company has developed four generations of Bandicoots which vary in terms of size, capabilities and flexibility, and cost Rs 18-30 lakh. The Kerala Water Authority has signed an MoU with Genrobotics to end manual scavenging in the state by making sewer-cleaning technology available.

Taking a step in this direction, Telangana has introduced 70 mini jetting machines to clean sewer lines. The machines can easily traverse narrow gullies of the city to clear clogged drains. The have now been handed over to the manual scavenger-turned entrepreneurs.

Nitya Jacob, water and sanitation policy expert at Sustainable Sanitation Alliance (India), says the government should also promote inexpensive and potable systems like gulper. It is a simple sewage sludge pump that follows the design of a hand pump. It has already been tested in Dar es Salaam, Tanzania, and have proved successful on liquid sludge.

There is an urgent need for equipment and machinery innovations, says the 2017 Dalberg report. The government must introduce a “smart sanitation system”. It can use sensors to detect blockages; identify hotspots where blockages occur often; and monitor sewer cleaning via CCTV. Since public misuse of infrastructure results in regular blockages, the government should introduce diaphragm chambers in sewer networks that weed out blocking materials and refurbish the system where required.

It seems there is no dearth of ideas or technologies. But these can be implemented only if the government stands by its words.

(With inputs from Subhojit Goswami)