Govt must take stock of piling up solar panel waste

Experts say though recycling solar waste is a solution, there are challenges

A stairway to Moon can be built by simply joining the 24 billion solar photovoltaic (PV) modules that would be installed on Earth by 2050. But there is an ominous flip side to the revolution in solar energy. A solar panel has a lifespan of 20-25 years, so what will happen to this waste and how will it be discarded?

PV modules carry heavy metals and this cannot be dumped in landfills. A PV module is essentially made up of glass, metals, silicon and polymer fractions, and there are few materials like polymers as well as metals, metallic compounds and alloys which are classified as potentially hazardous.

Though India’s solar energy story is still in its nascent stage, solar energy installed capacity has increased by over eight times—from 2.63 GW in 2014 to 26 GW in 2018. According to a report of the International Renewable Energy Agency (IRENA), India will have solar PV of 600 GW by 2050. Vinay Rustagi, managing director of Bridge to India, a consultancy group advocating renewables, says the country will generate PV waste between 1 and 1.2 million tonne per annum. So far, regulatory authorities have not taken note of this long-term problem.

In fact, between August 2017 and January 2019, the National Green Tribunal (NGT) has, on three occasions, asked the government to frame policies to address the disposal of solar panel waste. In January this year, a bench headed by Raghuvendra S Rathore expressed concern over the dearth of government policies related to disposal of these panels. 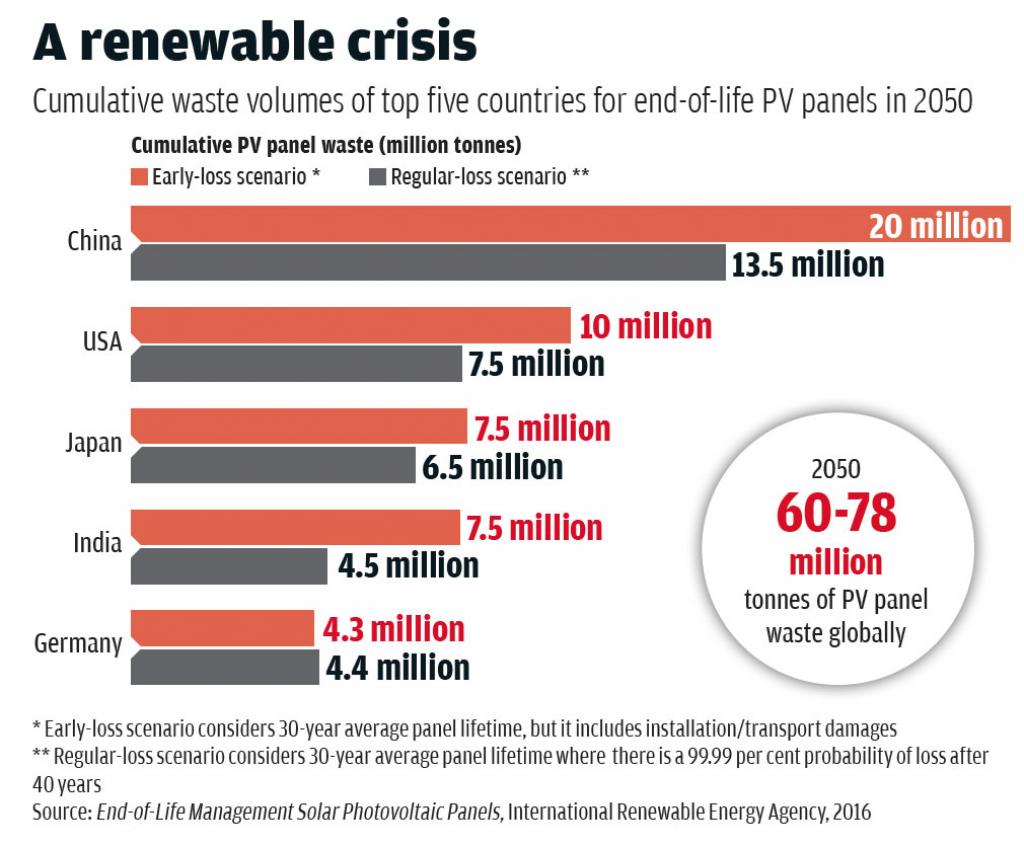 By default, PV waste is guided by the e-Waste Management Rules, 2016, which puts the onus of disposal on manufacturers under the Extended Producer Responsibility (EPR). “But there is absolutely nothing in the policy as to how the country will handle its solar waste. The government must think on the lines of EPR, which is meant for electronic goods,” says Swati Singh Sambyal, programme manager, Municipal Solid Waste, Centre for Science and Environment, New Delhi.

It is, in fact, a global trend, where countries do not have a specific rule on the disposal of solar PV. The exception is Europe, where 28 countries adopted the Waste Electrical and Electronic Equipment Directive in 2012, which includes PV waste. Under this, module producers are required to collect and dispose the PV modules.

Anil Kottantharayil, a professor at the National Centre for Photovoltaic Research and Education Centre, IIT-Bombay, explains the making of PV modules. He says one silicon PV module contains 65 per cent glass, 17 per cent aluminium, 10 per cent plastic, 3 per cent silicon, one per cent copper and 0.03 per cent silver. Other than this, one module carries more than 0.05 per cent lead or tin. He adds that though the presence of heavy metals is small, it needs to be handled carefully.

When Down To Earth spoke to Dev Sharma of Jaksons Developers Pvt Ltd, Greater Noida—which has installed solar panels at the Rashtrapati Bhavan—he said he did not wish to discuss the problem of solar panel waste. Rustagi disagrees: “If we don’t take preemptive steps now, it will be tough to handle the crisis 20 years from now.”

Some experts say though recycling solar waste is a solution, there are challenges. PV waste recycling is still at a nascent stage globally, both in terms of technical standards and physical infrastructure. So at present, PV module recycling is not commercially viable. Anil Kottantharayil, however, disagrees. “Recycling makes sense when one considers the energy consumption in manufacturing. But if we recycle solar panels, we will not need as many materials,” he says. Recycling technologies for solar panels may be evolving, but the government needs to urgently take stock of the mounting solar waste crisis and come up with regulations.