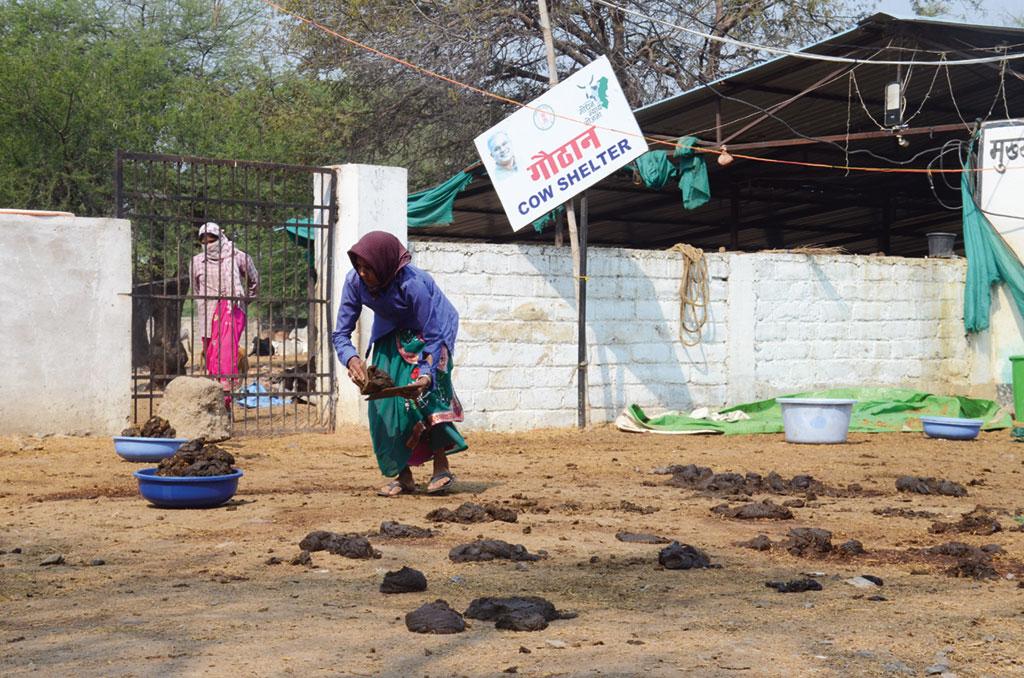 We have not run it in a while; that’s why it is taking time,” said Janak Dhuve, as he heaves at the handle to start the heavy-duty generator. “It is winters. We do not need to switch on the fans during the day, and there is no one here to use the lights at night,” he said, rotating the lever again. A couple of minutes and a few more attemps later, the machine did start and brought the ceiling fan and the LED bulbs alive.

Dhuve is the operator of the biogas power plant at a gauthhan (cow shelter) in Bancharoda village of Chhattisgarh’s Raipur district. The generator at the plant runs on methane produced from the dung collected at the gauthhan.

The biogas plant, under Swachh Bharat Mission, at the 3-hectare shelter was inaugurated by Chief Minister Bhupesh Baghel last October and later made a part of the state’s Godhan Nyay Yojana, in force since July 20, 2021.

Godhan Nyay Yojana is the state’s flagship scheme to “facilitate rapid strengthening of rural economy” by giving “a boost to dairy business and organic farming” while “improving” the village environment. The government currently operates 7,889 gauthhans across the state. 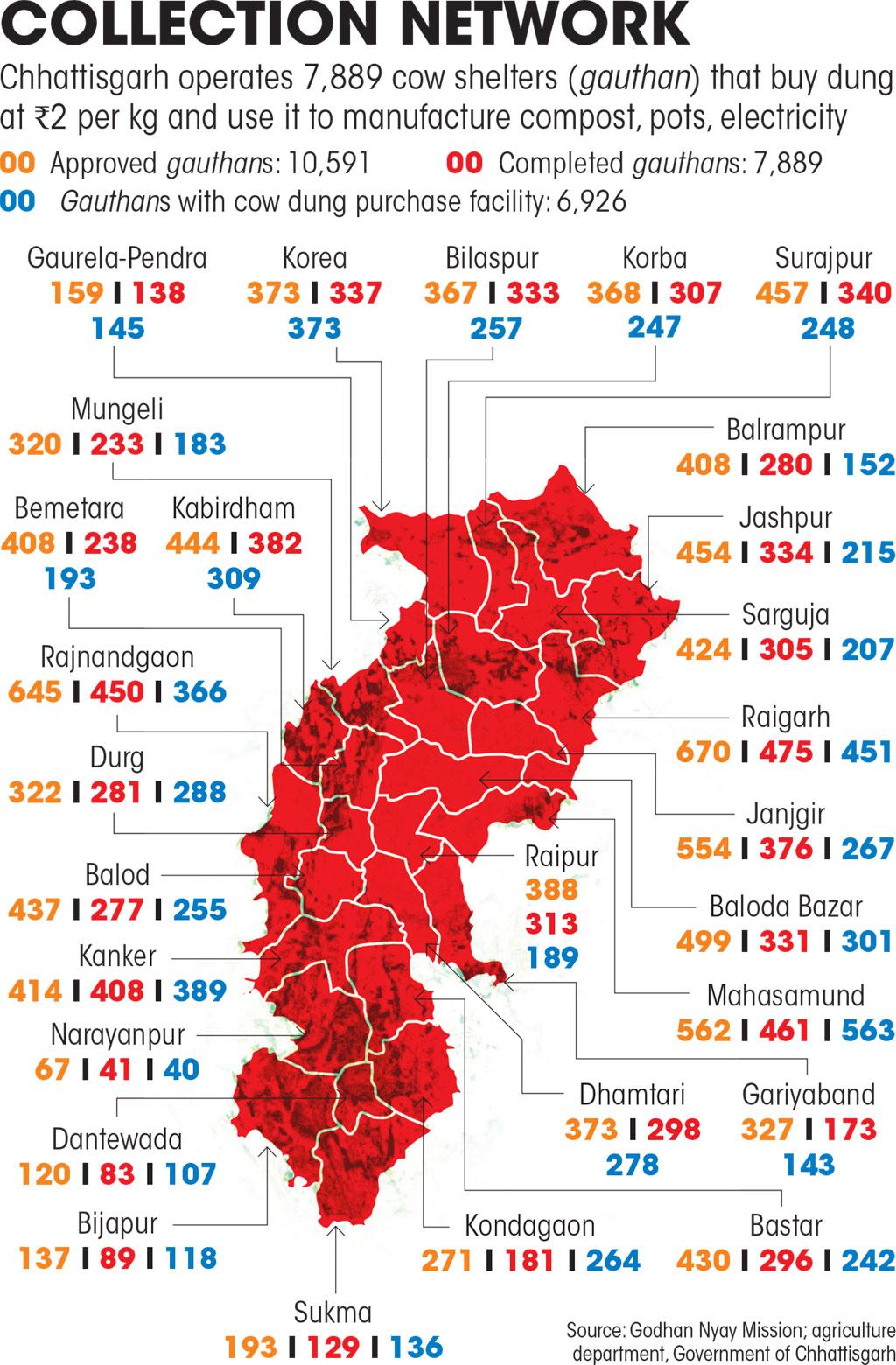 The working of gauthhans is the responsibility of the local self-governing body. In rural areas, it is run by a 13-member-committee whose office bearers are appointed on the recommendation of the Gram Sabha. In urban areas, municipal council appoints the committee.

Those who want to use them must register at the local Panchayat / municipality; after that they can take their animals to the shelters in the morning. The shelter provides free fodder, takes care of the cattle through the day and pays Rs 2 per kilogramme for the dung collected. The animals have to be taken back in the evening.

The shelters are supposed to utilise the dung by turning it into compost and making products like dung logs, incense and pots. For this they employ self-help groups.

With the biogas power plant at Bancharoda, the state government also tried to use the dung to generate electricity. Yet the plant is the only one of its kind in the state, though Chhattisgarh plans five more, Bharathi Dasan, managing director of Godhan Nyay Mission, tells Down To Earth (DTE).

In February, DTE visited 10 gauthhans in four districts — Raipur, Durg, Bemetara and Kabirdham — to assess their functioning and found that the scheme which was planned to help rural economy is now primarily urban-centric.

Of the 6.39 million tonnes of dung procured in the state till February 15, 2022, some 3.37 million tonnes (52.7 per cent) has been procured in just seven districts — Rajnandgaon, Raipur, Durg, Raigarh, Korea, Dhamtari and Balod — while 47.24 per cent has come from the remaining 21 districts.

Six of these seven districts are in the Raipur and Durg divisions, which shows the scheme is focused around the capital city.

At a gauthhan at Phundahar in Raipur, most composting pits were filled with dung while heaps of dung could be seen outside mixed with decomposer. Sacks of ready compost also lined the stockroom.

But no work to make dung products was being done. Vikrant Sharma, convenor of the gauthhan committee, said he has sold 21,000 tonnes of compost so far, mostly to the forest department, but 70 per cent of the payment has not come. Agriculture and horticulture departments have not purchased dung from them, nor have private farmers because they can get it at a slightly lower rate in the market.

The rate at gauthhans (Rs 10 a kg) is higher because the additional money is used to pay for dung procurement. The government has now mandated that 10 per cent of the compost farmers procure from cooperatives has to be from gauthhans.

The response of self-help groups (SHG) to the Godhan Nyay Yojana has been mixed. The Bancharoda gauthhan, for instance, has 20 women self-help groups, involving over 200 members. Gita Sahu, who runs one such group at Bancharoda, said she and her eight colleagues have sold 31.6 tonnes of compost, earning Rs 20,000 per head since February 2021.

When DTE visited the shelter, all the compost pits were full, but no other works to utilise the dung was being done since none of the groups were working due to lack of demand.

“Government agencies and farmers are only buying the mandatory quantity and our net income is zero,” said Mohan Sahu, secretary of the gauthhan committee.

In rural areas, the scheme has had limited success in curbing the problem of crop destruction. Animesh Mishra, member of Basani gram panchayat in Bemetera district, said that crop destruction has continued despite a gauthhan at Jewra in the district.

On its visit, DTE found the shelter without any animals or officials. Similarly, the gauthhan at Motipura gram panchayat in Durg district is poorly managed, with stray cattle roaming right outside the shelter in large numbers. Devnarayan Sahu, husband of Motipura sarpanch Yogita Sahu, said the shelter was set up last November, but a samiti is yet to be appointed though recommendations have been sent.

The number of people selling dung at gauthhans is also declining. Santosh Chandrakar, a farmer from Bancharoda, said he has earned just Rs 4,000 by selling 2,000 kg of dung at the gauthhan in the past one-and-a-half year. DTE analysis also found that the average purchase of dung by gauthhans has reduced from 33,000 tonnes per month in July 2020-November 2021 to 23,000 tonnes in December 2020-February 2022.

Kishor Verma, head of Bemtera district's unit of Chhattisgarh Gau Sevak Sangh, said if procurement and sale of dung is streamlined and payments made on time, the scheme can be a success.

“There is a need to strictly enforce the 10 per cent compost purchase rule. If there is demand for dung products, electricity generation will also pick up as the power produced could be used to run the production equipment,” he said.