Solid waste management: Why integrating informal sector is a must 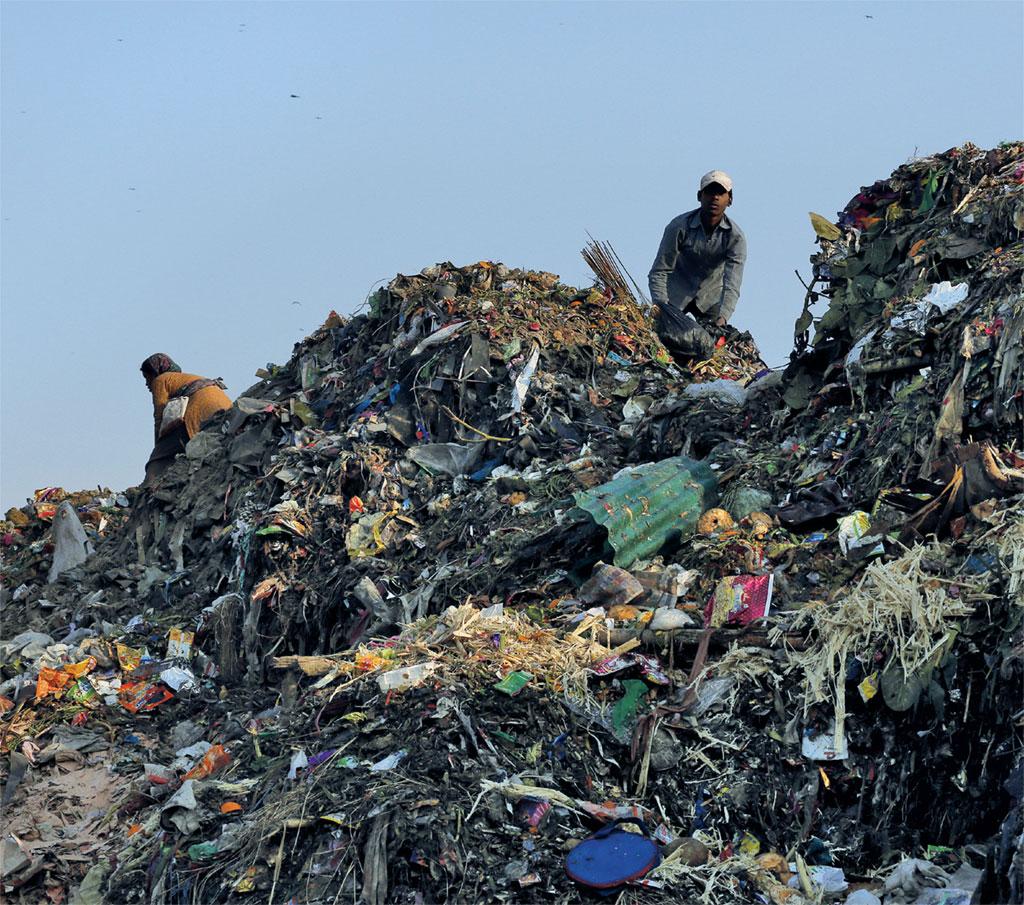 With burgeoning population and even faster urbanisation, there has been an explosion in the generation of municipal solid waste (MSW) in Indian cities. This has severely damaged the environment and public health, and strained the capacity of urban local bodies to collect, transport, treat and scientifically dispose of solid wastes.

It is important to note that the engagement of formal waste management system remains low in the cities, primarily due to insufficient funds, low sectoral development and lack of know-how about sustainable waste management businesses.

The informal sector may refer to individuals, families, and private sector enterprises working in solid waste management services, whose activities are not organised, sponsored, financed, contracted, recognised, managed, taxed or reported upon by governmental authorities.

According to the Solid Waste Management Rules (SWM), 2016: “informal waste collectors” includes individuals, associations or waste-traders who are involved in sorting, sale and purchase of recyclable materials. SWM 2016 define a “waste picker” as a person informally engaged in the collection and recovery of reusable and recyclable solid waste from the source of waste generation to sale of waste to recyclers directly or through intermediaries.

The informal sector is often not officially approved, recognised and acknowledged, besides the fact that they potentially contribute to waste recycling practices of cities by collecting, sorting, processing, storing and trading waste materials in the recycling value chain.

While exact figures for the number of people involved in this work are difficult to come by, ‘Role and size of informal sector in waste management — a review’, a paper published in Waste and Resource Management in 2013, estimates that the informal waste economy employs about 0.5-2 per cent of the urban population worldwide.

The informal recycling sector reduces the cost incurred in the treatment and disposal of solid waste by extracting recyclables before the mixed waste is subjected to any specific treatment or haphazardly dumped into the landfills.

The informal sector is the backbone of the recycling industry in the country, contributing a lot in terms of environmental sustainability and circular economy. It also enormously contributes in reducing the economic burden of urban local bodies.

For instance, the Bruhat Bengaluru Mahanagara Palike (BBMP) became the first municipality in the country to register waste-pickers and catalogue scrap dealers. If we assume that, on an average, 70 kilogramme of waste is picked up by a single waste-picker in the city daily, the quantity of waste diverted from landfills to waste-pickers would be 10,6671 tonnes per annum (considering that organic waste is 60 per cent; dry waste is 30 per cent; and inert waste is 10 per cent of the waste mixture).

As reported by a 2014 study conducted by Hasiru Dala, a Bengaluru-based non-profit, nearly 4,200 registered waste-pickers save the city about Rs 23 crore annually, which would otherwise have been an addition to the BBMP’s budgeted Rs 450 crore.

The informal sector lives in close proximity to dumpsites and works under unhygienic and unhealthy conditions. Often, the workers have no access to drinking water or public toilets. They do not have appropriate personal protective equipment (PPE) such as gloves, gumboots and aprons. Due to the poor living and working conditions, malnutrition, anaemia and tuberculosis are common among them.

Waste-pickers are potentially exposed to a wide range of occupational hazards. Community waste bins and dumpsites act as breeding grounds for various bacterial and viral diseases.

As a result, waste-pickers often face gastrointestinal ailments. They have to segregate recyclables from mixed waste. At times, they handle sanitary waste, domestic hazardous waste and household biomedical waste with bare hands, which may cause various infections.

Infections are also caused by their contact with human and animal excreta, bodily fluids and dead animals. They also get cut by sharp objects, ragged metal edges and broken glass in the mixed waste.

It is widely recognised that the informal sector engaged in waste collection and sorting carries out the most labour-intensive and least rewarding job of recovering recyclable materials from unsegregated waste. Despite their crucial role, informal waste-workers continue to be subjected to systemic marginalisation, economically as well as socially.

They are treated as dirty and unwanted elements of society, and they have to deal with exploitative social behaviour. While the wages and living conditions of different strata of informal waste-workers differ greatly, a majority of them (street waste-pickers) work and live in hazardous conditions. They typically lack access to sanitary and healthcare facilities.

Further, child labour is quite prevalent and life expectancy is low. In addition, waste-pickers are not covered under any labour legislation. As a result, they do not benefit from social security and medical insurance schemes. There is a dire need to initiate policy action for their social and economic upliftment.

Bengaluru municipality: a story of change

Bengaluru became the first municipality to set up dry waste collection centres (DWCC)in the country. DWCCs are an important element of decentralised waste management in Bengaluru, where the recyclable materials are segregated processed, and resold to recycling industries.

Though the concept was modelled after the neighbourhood recycling centres, it is based on the principles of waste hierarchy, to put in practice the three Rs — reduce, recycle and reuse — at the neighbourhood-level.

DWCCs facilitate the collection and buy-back of all dry waste from local residents, contract and waste-workers, and scrap dealers. They help integrate informal waste-workers into the operations of these centres and encourage or implement extended producers’ responsibility (EPR) of packaging materials that are not being recycled currently, thus serving as the cornerstone for the triple bottom line of operations — people, planet and profit.

The administration and management of each DWCC is facilitated by Hasiru Dala or its partners. Of the 32 centers, 19 are run by scrap dealers and 13 by waste-pickers.

Each centre has a minimum of two sorters, with some centres employing more than seven sorters. Given that India generates 100,000 non-IT blue-collared jobs annually, the 33 DWCCs in Bengaluru have managed to create 0.16 per cent of them, according to Harisu Dala annual reports. 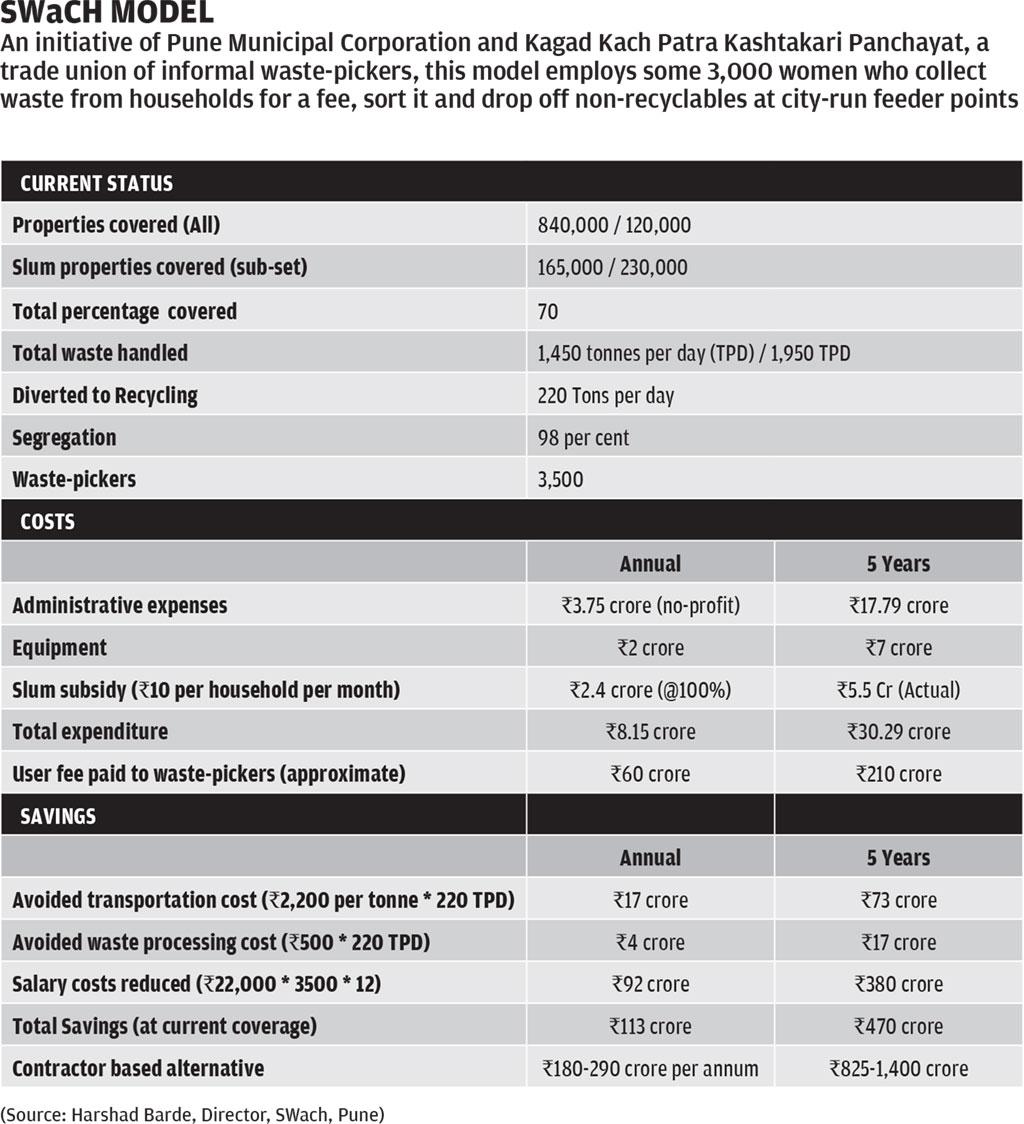 The Kagad Kach Patra Kashtakari Panchayat (KKPKP) — a trade union of informal waste-pickers and waste-buyers in Pune and Pimpri-Chinchwad was formed in 1993 and got occupational identity in 2007. SWaCH is a joint project of KKPKP and the Pune Municipal Corporation (PMC) — the first such entity created through municipal action.

Today, KKPKP has over 9,000 members, 80 per cent of whom are women from socially backward and marginalised castes. SWaCH has over 3,000 worker-members (all women), who provide door-to-door waste collection services (in exchange for fees paid by each household), sort the waste and drop off non-recyclables at city-run feeder points.

They also earn by selling recyclables to local scrap dealers. Members are provided with identification cards that are endorsed by PMC, which also provides members with identity cards that allow them to avail benefits, such as interest-free loans and educational support for their children. PMC also provides safety gear, raincoats, footwear, uniforms and collection equipment.

There is lack of clear and comprehensive laws and policies to protect the rights of waste-pickers in India. There is an urgent need to frame and implement a uniform waste-picker welfare law that recognises and integrates them into the waste management chain.

The law must include basic provisions related to mandatory identity cards; access to waste for collection, segregation, and sorting; PPE to minimise occupational hazards; right to basic necessities like water, sanitation and facilities for clean living; and health insurance.

The role of waste-pickers could be formalised by permitting them to use the designated collection and compaction stations (transfer stations, material recovery facilities) in a city for the segregation of recyclables.

The state responsibility is to establish partnership with waste-picker organisations — which is also mentioned in the SWM 2016 Rules. There is a need to identify, organise, train, and empower the waste-pickers.

This can be done by designing an inclusive waste management model to integrate the waste-pickers. For example, involving them in the primary door-to-door collection of waste, or engaging them in material recovery facilities. There should be provision of enough space for sorting, recycling, trade of recyclables.

The approach will not only help induce circular economy in waste management by promoting recycling but also minimise the need of energy-invasive and least preferred technologies — incineration and landfilling — in the integrated waste management hierarchy.