The Swachh Bharat Mission Urban completes three years on October 2, 2017, but has the mission gone beyond brooms and sticks? How far country has fared in the cleanup act? 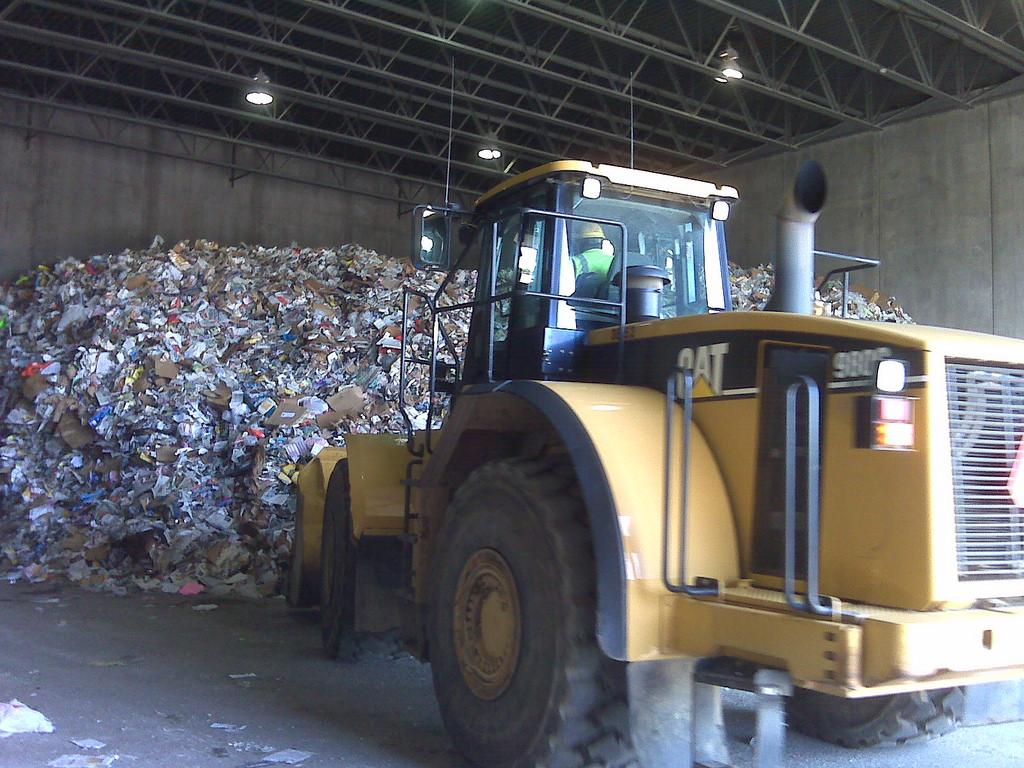 Less than 10 per cent of the waste is being processed in 11 states across the country. Credit: ACE Solid Waste / Flickr

SBM-U has set an objective to achieve Clean India by October 2, 2019. In the urban areas, the SBM focuses on constructing individual toilets, community toilets and solid waste management (SWM). While the first two years of the SBM-U was focused on bringing about necessary regulatory and policy changes to facilitate the scientific processing of waste, in the third year, the mission shifted its focus on bringing about behaviour change among citizens and encouraging them to segregate waste at source. In order to encourage cities to be a part of this initiative, various schemes, campaigns and awards have been launched such as Swachhata Hi Seva, Swachh Survekshan, Segregation at Source campaign, City Compost Policy, Swachhata Pakhwada and Swachhagrahi. In a sign of positive shift, citizens are participating and getting involved in most of these schemes.

In the first two years, SBM did not focus much on collection of segregated waste from households and commercials spaces. Even the systems to support segregation were not created in most of the cities. The third year of the mission started the propagation for segregation at source on June 5, 2017. The MoHUA directed all 4,041 statutory towns and cities to adopt source segregation as a mass movement, where every household and every waste generator starts segregating their waste into two bins–green and blue. However, its implementation in the last four months has been bleak. 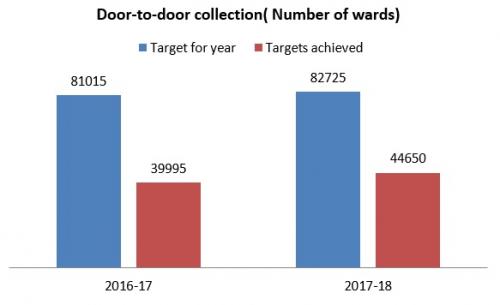 The door-to-door collection efficiency has increased from 48 per cent last year to 53 per cent this year. The data listed on the Swachh Bharat Mission’s official website shows that all wards in the states and union territories (UTs) of Andaman & Nicobar Islands, Chandigarh, Dadra & Nagar Haveli, National Capital Territory (NCT) of Delhi, Goa, Meghalaya, Nagaland and Puducherry are covered under 100 per cent door-to-door collection.  However, the information for some cities is inaccurate. For instance, while the data made available by Municipal Corporation of Delhi (MCD) shows that the city has 280 wards, SBM claims that 294 wards of Delhi are covered under door-to-door collection, showing inconsistency in the data.

In the last three years, the sanitation workers have refused to collect waste door to door and have gone on strikes on issues related to non-payment of salaries and contractor-related concerns in many cities such as Delhi, Chandigarh and Bengaluru. Also, in many cities, the door-to-door collection has failed to integrate the informal sector.

The waste processing capacity has jumped from 18 per cent in 2016-17 to 25.3 per cent in 2017-18. As reported in the website, 100 per cent of the waste is being processed in Chandigarh. However, in Chandigarh, the waste management plant managed by Jaypee has been under public litigation and is barely operational. All the 300 tonnes of waste from the city is being dumped at Dadumajra on most days of the month. No processing system has been put in place for management of the waste in Jharkhand, Daman & Diu and Dadra and Nagar Haveli. In 11 states (Andhra Pradesh, Assam, Chhattisgarh, Haryana, Jammu & Kashmir, Punjab, Maharashtra, Mizoram, Odisha, Uttarakhand and West Bengal), less than 10 per cent of the waste is being processed.

4. Funds for SWM under SBM-U

In 2015-16, 25 per cent of the total money released was for solid waste management and 70% for toilet construction; in 2016-17, 45 per cent of the money released was for solid waste management and 45 per cent for toilet construction. The estimated cost of implementation of SBM (Urban) based on unit and per capita costs for its various components is Rs 62,009 crore, out of which, the budget for SWM was set to be Rs 7,365.79 crore. Of the budget set for SWM, only 28.8 per cent of the funds have been released in the last three years. This means, almost 71 per cent money is still left to be used in SWM for the next two years. As per the expenditure reported by SBM, northeastern states of Assam and Tripura, along with Dadra & Nagar Haveli and Daman & Diu have not received any funds under SBM till date.

The policy on promotion of city compost dictates that subsidy is to be provided by the Ministry of Chemicals and Fertilisers and the budget allotted to it is just Rs 15 crore, whereas for the construction and revival of composting plant, or any other waste project, viability gap funding of 35 per cent is being provided under SBM.

5. Waste to Energy or Waste of Energy under SBM?

On August 4, the Ministry of New and Renewable Energy (MNRE) claimed in the parliament that five projects of 66.4 MW are operational and generating power from Municipal Solid Waste (MSW). These projects, located in Solapur (Maharashtra), Jabalpur (Madhya Pradesh and New Delhi, are able to process about 4,516 tonnes of MSW per day. Under Swachh Bharat Mission (SBM), 48 MSW-based plants with cumulative installed capacity of 412.5 MW are under construction. However, the data in different government reports for the installed, under construction, under tendering and operational capacities varies.

The SBM website claims that the current installed capacity for waste-to-energy (WTE) plants in India is 88.4 MW, which includes Rochem (10 MW) Plant in Pune and the Karimnagar (12 MW) plant in Telangana. While Rochem has stopped operating since 2012, the one in Kairmnagar is also closed since 2009.

Recently, NITI Aayog, in its three-year agenda, has proposed that in order to push for sustainable processing, WTE plants need to be scaled up from the current capacity to 511 MW by 2019. It also goes on to say that composting/ biomethanisation are unsustainable practices. This flags off another major concern and shows incoherence with SBM guidelines that support decentralised mechanisms for waste management.

While the focus of the government should be on ensuring that maximum waste in the country is processed, the increased tax burden under the Goods and Service Tax (GST) regime on the recycling and composting industry is not aligned with this 'noble' mission. The increased tax slabs for recyclables is killing the recycling sector. The composting machines are now attracting 12 per cent tax against the 8 per cent previously. While on one hand the government is trying to promote city compost, imposing 5 per cent GST will have a negative impact on its production and promotion. Solid waste management has received much-needed attention through SBM, but if sustainable practices are not adopted at an accelerated rate, the mishaps like Ghazipur and Deonar will frequently repeat.

The focus for the remaining two years should be on segregation, creating systems to support segregation, sustainable processing and minimal land use for waste disposal.