Ten zero-waste cities: How Taguig in the Philippines became clean

Can we imagine a city in India without waste? Arguably, no. Rather our cities are drowning in their own wastes.

It is a big challenge now to collect, segregate and manage our waste in cities and towns. But there are cities across the world, including in India that have become completely waste-free.

They did so by adopting the ‘zero waste model’. This model is all about significantly reducing waste, eventually completely eliminating it.

Most of what we now waste can be safely and economically recycled, reused, composted, or turned into biogas through anaerobic digestion. It also creates a large number of well-paying jobs. Informal waste collectors are brought into the net and provided with decent earnings and dignity.

This is a unique model of solid waste management — frugal and generating wealth from waste. And it is successfully being implemented.

Down To Earth has curated a list of 10 cities across India and the world which are now ‘zero-waste’.

Taguig’s fight to be clean

The first among them is Taguig in the Philippines, which became clean mainly by segregating waste at source and diverting it.

A few years back, the city, a barangay or community of metropolitan Manila, was known for its dumpsite, a vacant plot, where heaps of mixed waste from its households as well as those in its affluent neighbours landed.

Perhaps the best example of how Taguig’s transformation took place is one of its own barangays, Fort Bonifacio. The youngest barangay in Taguig, Fort Bonifacio had a population of about 11,739 according to the 2015 Census. It produces about 0.32 kilogram per capita per day of waste.

In 2009, Fort Bonifacio officials were facing challenges on managing its waste. They had limited resources and no clue from where to start the process of managing waste.

In order to address the increasing issue of solid waste, the city officials approached Mother Earth Foundation (MEF), a Filipino non-profit, for assistance.

In 2011, under the guidance of MEF, Fort Bonifacio officials visited barangays with the best RA 9003 (a legislation in the Philippines on SWM) practices such as Barangay Bagumbuhay in Quezon City; Teresa in Rizal; and Puerto Prinsesa in Palawan.

They then proceeded with a self-assessment and baseline survey, visiting each of Fort Bonifacio’s eight zones to scope out problem areas where waste accumulated.

MEF and Fort Bonifacio formally launched ESWM in 2012 and the barangay passed an ordinance in full compliance with the national law on ESWM.

This ordinance formally established the barangay ecological solid waste management programme, mandating correct segregation, collection, recycling, and disposal, as well as an MRF site for the barangay. In 2014, the ordinances were updated to respond to new developments. This further helped the work on ground.

According to the WACS, organic waste comprised 40 per cent of the total waste in Fort Bonifacio, representing the amount that could easily be composted and converted into fertiliser, and thus diverted from the landfill. This showed that there was a value in waste, if segregated.

“Eighty per cent of the waste collected is diverted at the MRF and has 95 per cent household compliance rate,” Sonia Mendoza, chairman of MEF, said. 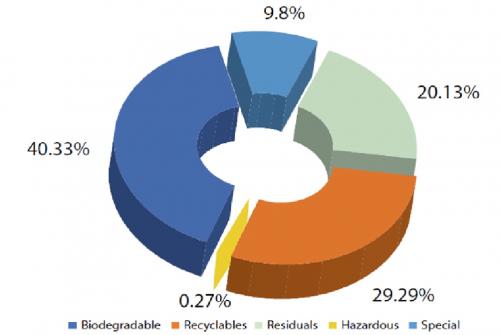 Mendoza said this also reduced the number of city trucks collecting waste from the barangay, from the daily average of four trips per day, down to only one trip per day, resulting in savings of around P10, 000 (US $195) per day for the city.

According to the GAIA report on Taguig city, waste diversion serves as an indicator for both income — as recyclables are sold — and project success.

The project resulted in more efficient use of Taguig’s budget, saving PHP 800 (US$ 15) per cubic feet.

Today, 95 per cent of Taguig’s households segregate their waste before it is collected. The city is now clean and free of litter, and has shown remarkable progress in the fight against waste.

It was recognised as the ‘cleanest barangay in metro Manila’ in terms of solid waste management (SWM) in 2015.

This is the first of a 10-part series