These teenage waste crusaders are cleaning up Delhi's mess

Two brothers run a non-profit that collects dry waste, segregates it and then delivers it to recyclers 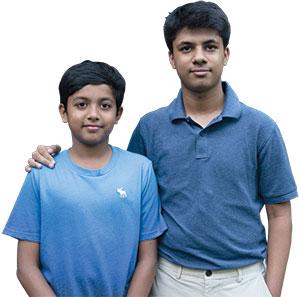 More than 400 households in Delhi are recycling their entire dry waste. This has been possible due to the tireless crusade of 15-year-old Vihaan Agarwal, and his brother Nav Agarwal, who is just 13.

Since February 2018, the brothers have been running a non-profit, One Step Greener, which collects dry waste from households across Vasant Vihar, Anand Niketan, Shanti Niketan and West End and delivers it to different recyclers.

“For example, the paper waste is sent to a paper mill, cardboards to cardboard manufacturers, glass items to bangle manufacturers, metal waste to furnaces and e-waste to a certified recycler,” says Vihaan.

They also conduct training workshops in different residential areas and schools to sensitise people on waste segregation. “We started segregating waste at home, but soon realised we needed to rope in others to make a difference,” says Vihaan.

Their idea is simple. Households that are part of the network need to segregate different kinds of waste in separate bins. Once residents have a sizeable amount of waste, they contact the non-profit over the phone which then schedules a pickup.

The non-profit charges Rs 2,400 a year from each household to hire a truck that collects the waste and sends it to the recyclers. The households also get paid for their waste.

“The recyclers pay Rs 10 a kilo for paper to Rs 2,000 for an old air conditioner,” Nav says. He adds that when they first floated the idea, they were told kabadiwalas do the same thing. “On close inspection, we realised they only take the waste that has monetary value,” says Vihaan.

The initiative has saved 344 trees and close to half a million litres of water. The real change, the brothers say, has been in people’s mindset. “Since we collect the waste once a month, most residents say they, for the first time, realised how much waste they generate and are now reducing their waste footprint,” says Vihaan.