The system not only prevented open defecation, addressed septage issue, but also gave easy access to clean and cheap fuel for cooking needs 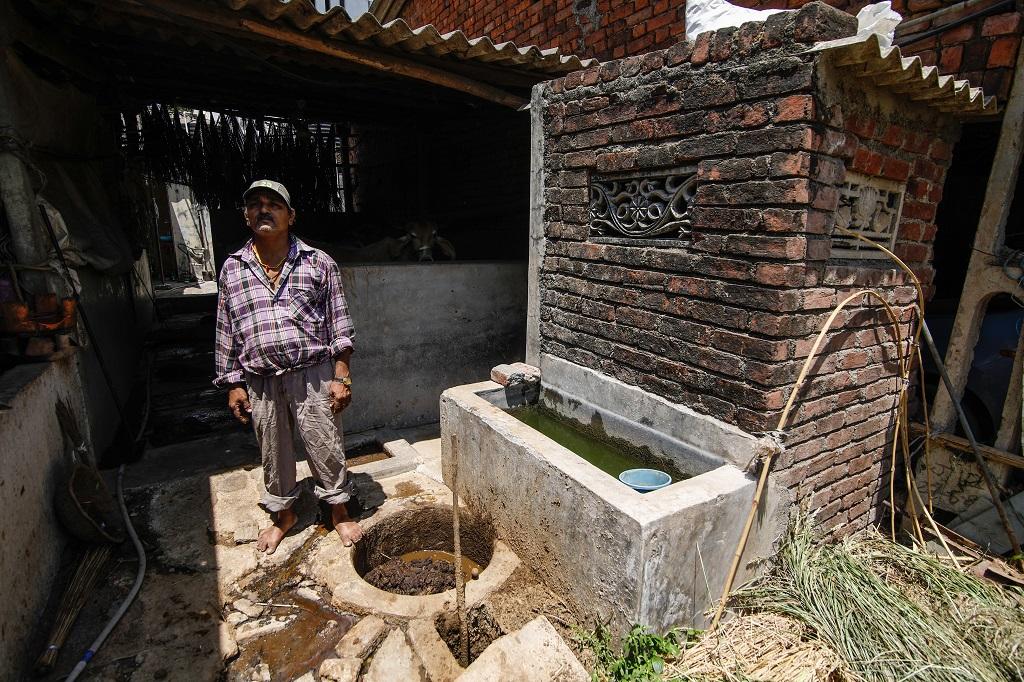 A villager standing next to a toilet-linked biogas plant in Valsad, Gujarat. Photo: Vikas Choudhary

While poor faecal sludge management in India remains a concern, a few hundred households in Valsad district of south Gujarat have shown the way by linking their toilets to biogas plants.

A toilet-linked biogas (TLBG) system eliminates the task of frequent emptying of faecal sludge from septic tanks or twin pits and dumping it in drains or landfill sites.

Under it, a toilet is connected to a biogas digester using a PVC pipe. Faecal slurry flows into the digester with gravity, following which, cattle dung, water, and kitchen waste is regularly added to it to produce biogas, which is then used by families as cooking fuel or for other purposes like heating water.

In a project started by FINISH (Financial Inclusion Improves Sanitation and Health) Society and Vasudhara Milk Cooperative in 2013, 747 households from five clusters of Chikhali, Gandevi, Navsari, Jalalpore, and Maroli in Valsad overcame resistance and superstitions associated with using human excreta.

“Under this system, India’s management of faecal sludge can be taken care of, at least in areas where animal husbandry and dairy is practised on a large scale,” says Rangi Khengar, then Development Consultant with FINISH Society.

“After the gas is produced, some solid matter is left behind in the dome, which takes about 20-25 years to get filled, after which  the decomposed waste matter can be scooped out and used as manure in the fields. It is better than having a twin pit system or leach pit, toilet structure,” Khengar added.

While the initial plan was to link existing toilets with biogas units, owing to religious concerns and psychological taboos associated with human excreta the team faced resistance from the houses as people did not agree easily to mix human waste with cow dung to produce biogas.

In a few homes that agreed to link the plant with toilets, logistical problems like toilet and biogas dome not being in close proximity cropped up.

An alternative strategy was then developed to approach homes with no toilets, spread awareness through women-led mobilisation teams from Vasudhara dairy, and constructing completely new biogas units and toilets, said Khengar.

This not only prevented open defecation and took care of treatment of faecal sludge and septage but also gave families easy access to clean and cheap fuel for their cooking needs as many of these houses earlier used dung cake or firewood for burning and cooking.

“We did not have any money to build a toilet. Going to the fields for our morning ablutions was the only option,” says Gitaben Chaniyabhai Bhagariya, 45, a resident of Karenjveri village. Not only the family of four has a toilet now, Bhagariya is relieved that she doesn’t have to go outside to collect firewood for cooking purposes.

However, she smiles when she recalls how she initially refused the TLBG system when the mobilisation team came to convince her.

“I was totally against this. We had several doubts and how can we cook food with biogas produced though our excreta. I am thankful to the women from dairy (mobilisation team) who kept following up, answered our doubts and explained the benefits. Lakdi wale chulhe me bahut taklif hoti thi. Abhi acha lagta hai aur bahut aaram hai (Cooking using firewood was difficult. It feels good now as TLBG plant has given me comfort),” she says.

The system is also economically viable as it saves the cost of building a septic tank or a twin pit for toilet and provides easy energy access to these households, 90 per cent of which are below poverty line (BPL) families.

Biogas provides a substitute for liquefied petroleum gas (LPG) as cheap fuel for cooking and lighting and allows the use of slurry for crop production.

The capacity of these plants is 2 cubic metre (m3) per tonne for a family of five to seven people or less and total gas production per day per plant is 1.5 cubic metre.  A 2 m3 (production capacity per day) biogas plant will produce total 60 m3 biogas in a month. That is equivalent to 26 kilogram of LPG, 37 litre of kerosene, 88 kg of charcoal, or 210 kg of firewood.