What happens to our excreta? Shit Flow Diagrams will help you track

Open-defecation free status is fine, but ensuring sustainable management of our faecal sludge is crucial

Be it India or elsewhere, shit has been in news for some time now. ‘Ensure availability and sustainable management of water and sanitation for all’ is Goal No.6 of the Sustainable Development Goals set by the United Nations General Assembly.

Expectedly, there has been an increased focus on organised sanitation in this world of six-billion-plus people — like Swachh Bharat Mission with a stated goal to make India Open Defecation-Free (ODF). Simultaneously, one question has been crucial: What happens to all that shit? This is where Shit Flow Diagrams (SFD) come in handy.

The importance on sanitation is understandable as faecal waste generated by us humans, if left in the open, can be a breeding ground of diseases. That explains the stress on being ODF from a public health perspective. But what happens once you are ODF?

A universal toilet coverage is only as useful as the share of the waste generated in those toilets are taken to their logical conclusion of being treated completely. Else, the faecal waste remains a health hazard. Tracking this process is not an easy task, especially in countries where infrastructure is still wanting.

Thus, most cities are clueless on how to carry or kill its waste and sludge. India’s official statistics pegged the amount of untreated sewage at 78 per cent of all that was generated. What happens to such waste? They gradually pollute our rivers, lakes and even the groundwater.

This is where SFDs can be of help to sanitation experts, policy makers and the civil society. These two-axes charts map the way wastewater and faecal sludge are managed in a given city / area, pointing out the resulting challenges as well. These highly visual tools help in identifying problem areas and advocacy during the urban planning.

The journey of SFDs started with the World Bank-backed Water and Sanitation Program (2012-13) that developed new tools while analysing excreta management in 12 cities. A group of institutions working on excreta management convened to further develop SFDs.

The New Delhi-based non-profit Centre for Science and Environment is part of the SFD Promotion Initiative. The website of SuSanA — an informal network of those working on sustainable sanitation — already features nearly 50 reports of SFDs of cities from around the world, even as more such reports are regularly being added.

Let’s take the example of Delhi: 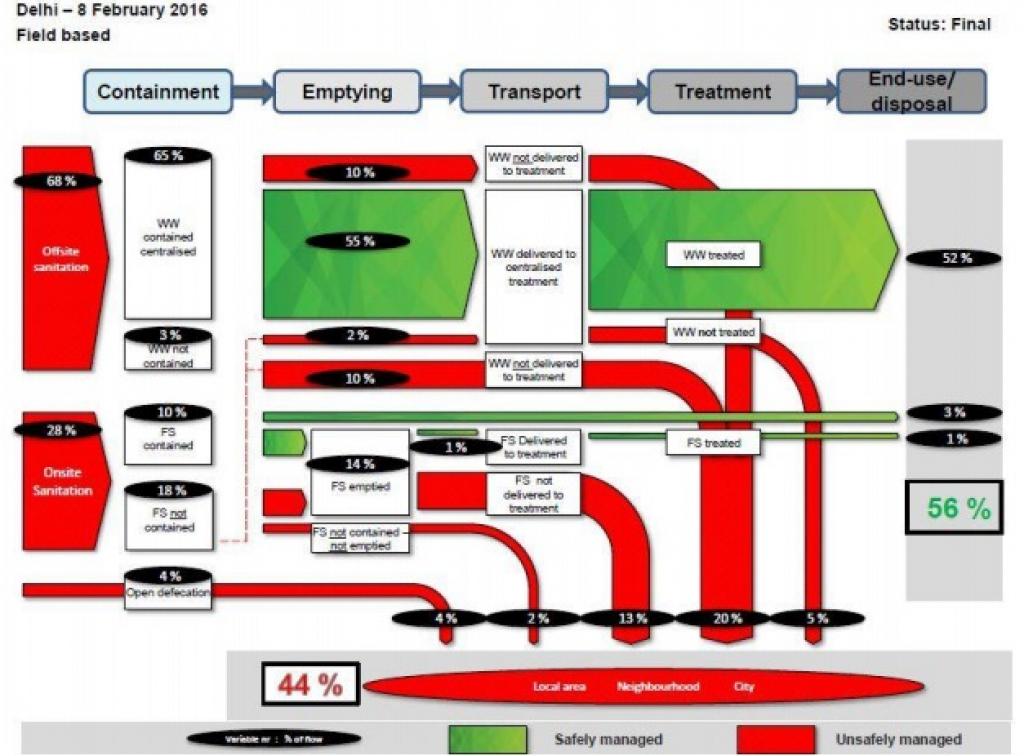