Plastic debris in oceans is a potential threat to Africa's food security, economic development, marine ecosystems and establishment of a vibrant blue economy 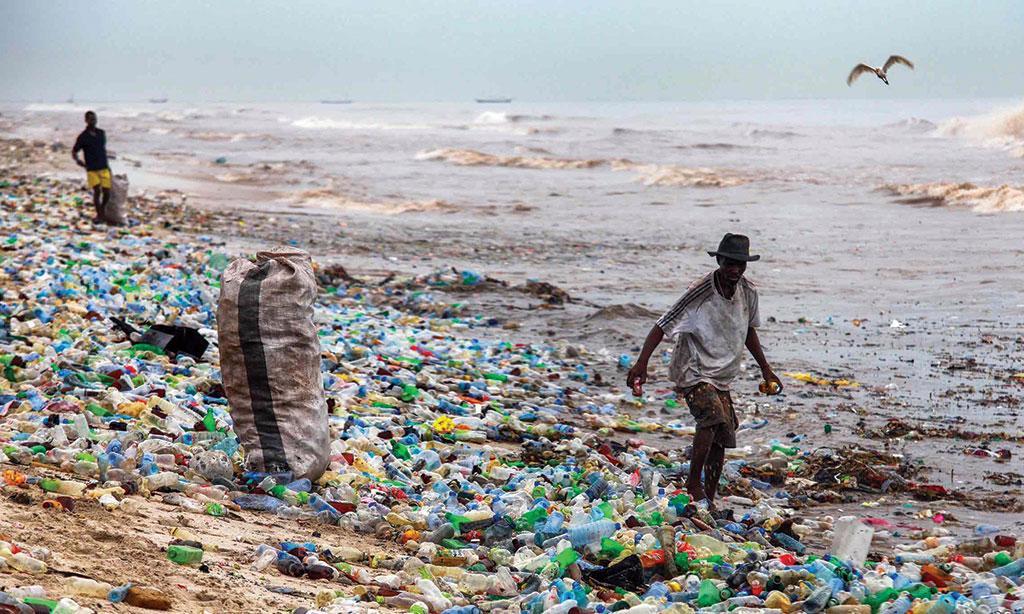 By 2025, the annual mismanaged plastic waste in Africa could be as high as 11.5 million tonnes. Consumer waste forms 93 per cent of plastic marine debris globally (Courtesy: GREENPEACE)

The fisheries crisis due to climate change is exacerbated by the fact that the world produces 300 million tonnes of plastic every year, of which about 8 million tonnes end up in the ocean from where it is almost impossible to retrieve. These trillions of plastic pieces last for hundreds of years, affecting the livelihoods and health of people in coastal countries, not to mention the impact on marine life.

Africa, which has the world’s highest population growth rate, especially in coastal areas, has a poor record of managing waste—only 10 per cent of its rubbish reaches the dumps, as per UN estimates, while the rest is left to rot in communities or burned in acrid bonfires. In 2010, annual mismanaged plastic waste for the continent was about 4.8 million tonnes and could reach 11.5 million tonnes in 2025, experts say. Five African countries are among the top 20 highest contributors to plastic marine debris in the world.

The problem is exacerbated by the growing middle class in Africa, creating large markets for consumer plastic goods and packaging. Eighty per cent of Africa’s gross domestic product (GDP) depends on just 11 countries—Nigeria, South Africa, Egypt, Algeria, Angola, Morocco, Sudan, Tunisia, Kenya, Ghana and Libya—all of which have prominent coastlines. Globally, consumer waste forms a staggering 93 per cent of plastic marine debris, 80 per cent of which is generated on land, according to the US Consulate General, the South African Maritime Safety Authority, the International Ocean Institute-African Region, the V&A Waterfront and Operation Phakisa, which has mobilised different agencies in Africa to work on plastic waste.

Going by the current recycling technology, 80 per cent of plastics, including single-use products like earbuds, sweet wrappers, straws and coffee cup lids, have little or no value at the end of life. Pollution from this sector alone could greatly impact fisheries that employs over 12 million Africans. Moreover, as subsistence fishing is significant in African countries, marine debris is a potential threat to food security, economic development, marine ecosystems and the vision of a blue economy.

Due to lack of clean drinking water, single-use sachets are popularly used. Plastic litter had clogged drains in the Ghanaian capital of Accra during heavy rains in 2015, causing flooding that killed at least 150 people. The most common policy at country-level is the ban or taxes on plastic bags which was promulgated after 70 per cent of livestock in Mauritania was lost to plastic ingestion in 1970s. Over 20 African countries, including Mauritius, Kenya, Senegal, Ethiopia, Zanzibar (Tanzania), have enforced bans and taxes. In Zanzibar islands, plastic bags are banned and any breach attracts a fine of up to 100,000 TZS (US $44) or six months in jail. Rwanda has been implemen ting the ban for quite a few years with significant success. Kenya, in its third attempt, is pushing hard to implement the ban this year, while Cameroon and South Africa have adopted taxes.

Eight social enterprises in four African countries are helping authorities manage waste better. In Lagos, Nigeria, Wecyclers and Recycle Points collect recyclable waste like plastic bags and bottles, cans, glass and paper from users directly. They incentivise consumers to sort their recyclable waste at home by exchanging it for points that can be redeemed for household items, food or cell phone minutes, turning their waste into value. TakaTaka Solutions in Nairobi, Kenya, asks consumers to segregate waste into organic (used to create high-quality compost which is sold to local farmers) and inorganic (sold to recycling industries or used to create tumblers). It collects 10 tonnes of waste per day and recycles up to 95 per cent of it. Proplast, which began in Senegal in 1997 by 14 women to collect and process plastic waste, now employs 100 women and processes 1,650 tonnes of plastic per year turning it into granulated plastic sold to local processing firms, and has set up drop-off centres in Dakar for public.

In South Africa, non-profit USE-IT works on a holistic approach to solid waste management through recycling programmes. Polyco, also in South Africa, has set up a mobile kiosk where people can give their polyethylene plastic for a cash card. All Women Recycling makes Kliketyklikbox—an eco-friendly gift box recycled from 2-litre plastic cool drink bottles. This initiative upcycled over 500,000 plastic bottles in 2016 while providing salary and skill development to marginalised women. Repurpose Schoolbags creates bags from billboard material and plastic bags in South Africa and gives them to schoolchildren in need. The bags have a portable solar panel that can be used as a desk lamp at night. In Ethiopia, SoleRebels creates fairtrade footwear using recycled tyres and handloom techniques. Similarly, Ocean Sole in Kenya collects over 400,000 discarded plastic flip flops annually and recycles them into art.

Technology, especially mobile technology, can also come to the rescue. For instance, Ecopost in Nairobi encourages people and businesses to collect and sort their waste in return for points on an app that can be redeemed for products. Ecopost collects both plastic waste and agricultural waste like rice husks, wheat bran, sawdust to create plastic lumber that can be used for fencing. This helps reduce deforestation while creating jobs for locals besides creating value. Although some of these initiatives are of a small scale at the moment, they have the potential to become successful.

To tackle plastics, the road ahead is to focus on innovation of alternate materials. Also, to reduce marine plastic waste, Africa should use Information, Education and Communication strategy along with campains for behavioural change in the public. All this, tied with policy that ensures plastic use is minimised will lead to efficient waste management.

(This story was first published in the 16-31st May issue of Down To Earth).