Will India’s recycling sector collapse under the new GST regime?

Under the new GST regime, all categories of scrap now have a high tax rate of mostly 18 per cent 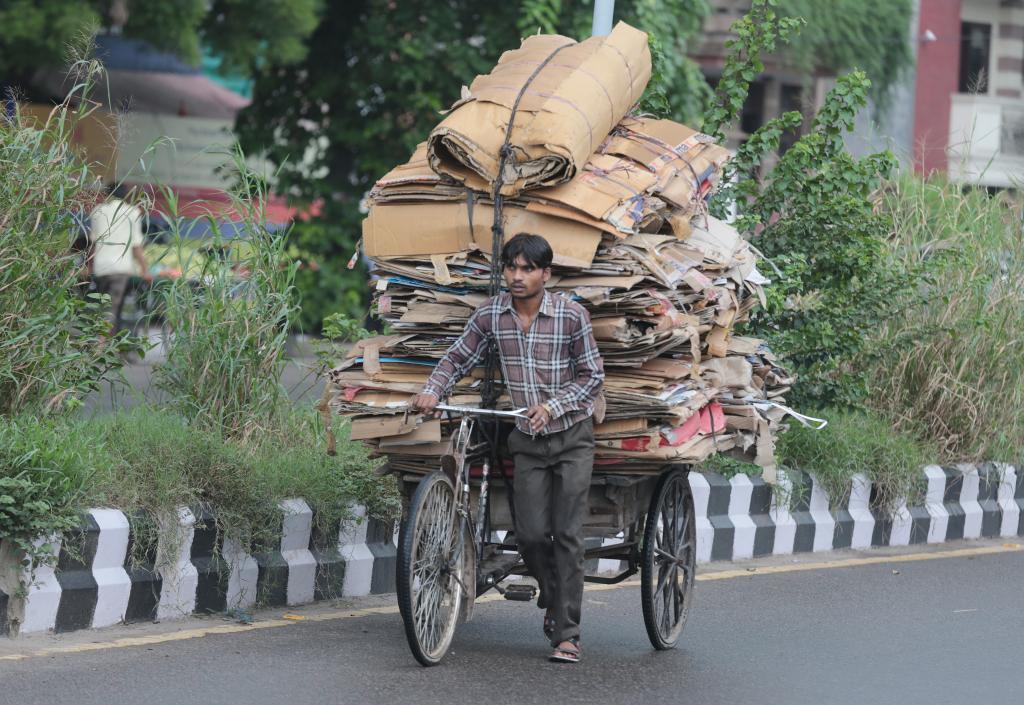 The Goods and Services Tax (GST) is a step in the right direction for India. But the rates on certain goods are a deep cause of concern. These include scrap material.

Before GST, there was no tax on scrap material except on e-waste and metals (6 per cent Value Added Tax). Under the new GST regime, all categories of scrap now have a high tax rate of mostly 18 per cent.

Vivek, a kabadiwaala (scrap-seller) in Dwarka, New Delhi told Down To Earth: “Due to GST on scrap, our work has reduced because the customer/ waste generators are now getting lesser rates for their recyclable waste. They are looking for better prices elsewhere or just throwing away their waste. Earlier, if we were getting 2.5 quintal per month of paper, now we are hardly getting 2 quintals.”

What does this mean for the recycle economy?

Every large waste dealer or recycler with sales above Rs. 20 lakh per year has to pay GST every 15 days. But waste in India has a very big chain of dealers as shown below:

The lower level dealers are not formalised and exempt from GST and the customers/ waste generators too don’t have a GST number so the large dealer has to not just pay higher tax rates on his own margin but also for the value he purchases the scrap at from all the links in the chain below.The recyclers also do not want to increase the final selling price of recycled goods in order to make it competitive to goods made from virgin material. (It is to be noted that previously, recycled goods had cost advantage when compared to goods made from virgin material because they had much lesser taxes on them, example recycled polyester staple fibre (PSF) had 2 per cent excise duty while virgin PSF had 12.5 per cent excise duty.)

So, what the large scale dealer is doing now is buying scrap at lower prices from before and in turn, the mid and small level dealers are also buying the scrap at lesser prices thus reducing the rate the kabadiwala and rag picker get. Not only this, large scale waste dealers will lay off their employees involved in waste sorting and recycling in order to cut costs.

Inputs from on ground waste collectors/buyers/dealers (kabadiwaalas) on how scrap selling and buying rates have changed for them post-GST:

According to Chitra Mukherjee from non-profit Chintan, “Recycling is being carried out in India almost entirely by the informal sector of more than 4 million people who will be greatly affected by the new rates because their already meagre incomes will get further squeezed.” The biggest sufferers in this entire chain are as always the people at the bottom of this pyramid–the rag pickers. The waste dealers or kabadiwaalas who are middlemen can at least hedge their losses by paying less for the material they buy. But the rag pickers have absolutely no bargaining power. Their incomes have shrunk by more than half.

“Registered recyclers/ dealers have the benefit that they can produce bills of taxes paid so will be preferred by the large scale dealers/ recyclers, but we are also obviously suffering because now we have to pay tax on purchase and sale both.” says Bhumika Puri of POM POM, a recycling organisation operating in South Delhi.

Swachh Survekshan 2018 lays emphasis on formalisation of the informal sector in the legal system, but high GST rates on scrap will instead wipe out the sector that has been providing incredible service to India’s people and environment.

Effect on the environment

Increased GST rates will definitely lead to more waste piling up in our landfills because recycling will reduce. The customer/waste generator and the informal sector will see no economic benefit in it. To cite an example, plastic carry bags and wrappers were never getting recycled in India because it was not economically viable to recycle them. But the other kinds of recycling was thriving especially through informal channels because the resource/ raw material for it was free but now it comes at a cost making the industry infeasible. This will wreak havoc on the environment. Taxing scrap doesn’t seem to be in line with the Swachh Bharat mission that should ideally facilitate more recycling or even with the Sustainable Development Goals that India has committed to.

Rescinding the GST levied on scraps of plastic, paper, cardboard and glass is a must. As Shashi Bushan Pandit from All India Kabadi Mazdoor Mahasangh puts it, “Tax should be on the waste generator, not on waste.” He cites another solution,  “In Colombia, informal waste pickers or dealers are now getting money from the government for providing their service to the people and environment. They get 2$ per day. If India’s government has to impose tax on waste/ scrap, then at least the money collected should go in paying the real environmentalists of our country – the rag pickers and the kabadiwaalas.”