With China banning import of plastic waste, who will bear the burden of recycling world's toxic scrap? 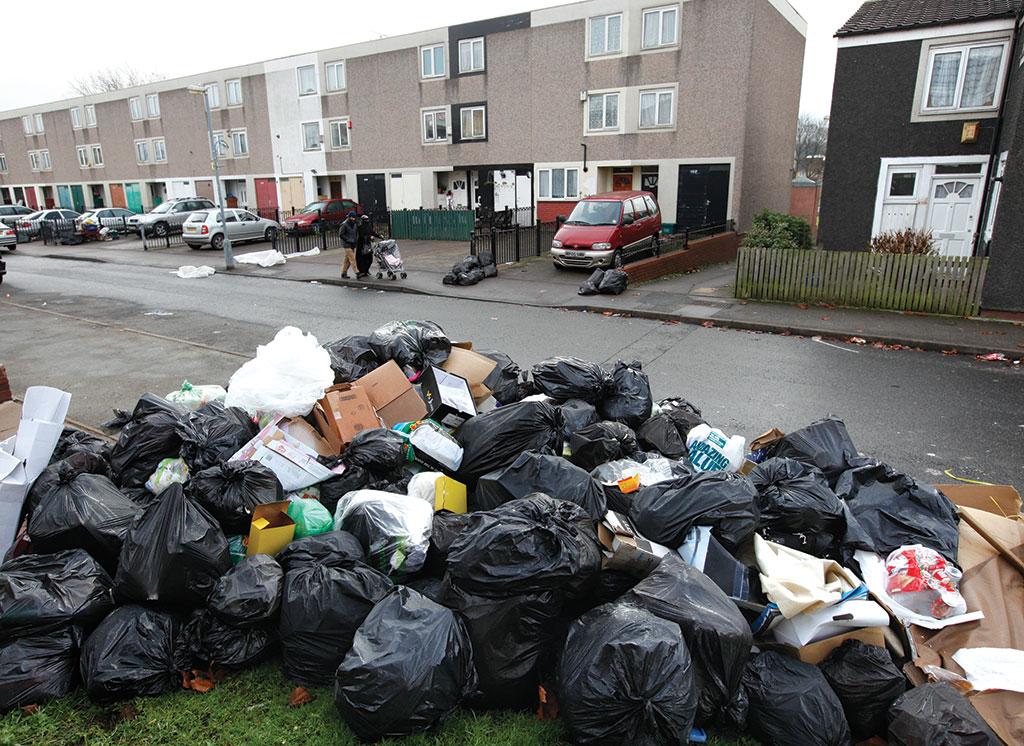 Piles of garbage along the streets became a common sight in the UK after China banned importing plastic waste (Credit: Reuters)

Streets across the UK were lined up with plastic waste this January. So severe was the problem that Simon Ellin, chief executive of the UK Recycling Association, the country’s largest network of independent waste and recycling operators, issued a media statement and called for “urgent action”.

The cause behind the pile up is a ban by China on the import of plastic waste. Before the ban, which became effective on January 1, China was the largest importer of plastic waste in the world. It used to transport products made from recycled plastic back to the countries from where the waste was imported. Citing environment and health concerns at the World Trade Organization in July 2017, China announced that it would stop import of 24 kinds of wastes, five of which were different types of plastic.

According to a 2014 report of Vienna-based non-profit International Solid Waste Association (ISWA), the annual volume of globally traded waste plastics was around 15 million tonnes, and China imported 56 per cent of this. The US was the largest source of plastic waste to China, accounting for 21 per cent of the country’s total import, followed by Japan (18 per cent), Germany (12 per cent) and the UK (9 per cent). Europe was the major exporter, with at least 87 per cent of its plastic ending up in China.

Though the China notification was announced six months ago, most countries did not take preparatory actions. “It looked like the waste management industry and world governments were hoping that China would change its mind,” Tisha Brown, oceans team, Greenpeace UK told Down To Earth (DTE). As a result, the impact of the ban is being felt across the globe.

“Even though there are some recycling facilities in Europe, they do not have enough processing capacity,” Pablo Leon, Asia manager for Madrid–based plastic recycling company Fosimpe SL, told DTE. Same is the case with the US. “We have seen a decline in paper and plastics recycling with some municipalities around the US already having stopped collecting certain plastics [because they can no longer send it to China],” Adina Renee Adler, senior director at Washington-based International Scrap Recycling Institute (ISRI) told DTE. ISRI is a network of 1,300 firms operating at 4,000 locations in the US and in 34 nations.

According to ISRI, the US exported plastics to over 90 countries. To China alone the export was more than 775 tonnes. Of the total scrap produced, the US could recycle only about 3.5 tonnes in 2014. This shows the volume of waste the US dumps in other countries for recycling.

“The closure of China’s market would also affect US jobs and government revenue,” states a 2017 report of The US-China Economic and Security Review Commission. According to ISRI, 40,000 US jobs are directly supported by waste and scrap exports and 94,000 are indirectly supported.

The ban has also had repercussions in New Zealand. On January 21, the country’s associate minister for environment,Eugenie Sage, told the press that China’s ban had created significant challenges for plastic recycling companies and she expected them to turn to Indonesia for their recycling needs.

In Japan, the government has used financial mechanisms to deal with the problem. “In response to China’s import ban, the Japanese ministry of environment has started subsidy for plastics recycling companies to install better equipment so that domestically we can promote recycling bottles and trays into pellet and finally outsource it to other countries for recycling,” Akiko Tsuchiya from Greenpeace Japan told DTE.

In the UK, the government has been taxing plastic bags since 2015. “Our 5 p [pence] charge on plastic bags has taken 9 billion bags out of circulation, reducing usage by 83 per cent,” said Secretary of State for Environment, Food and Rural Affairs, Michael Gove, in the House of Commons on January 8. “On 9 January, our world-leading ban on the manufacture of personal care products containing plastic microbeads comes into force,” he added. As per the US Food and Drug Administration, plastic microbeads are smaller than 5 mm and are used in personal care products such as toothpaste. The ban by the UK is targeted to reduce the use of plastic.

A 2014 report of ISWA flagged off the issues concerning the recycling industry of China. “There are concerns that the material could be used [by manufacturers] for the production of lower quality plastics in violation of specifications. The reprocessing and manufacturing techniques and conditions could potentially endanger the health of workers,” it said. The report also flagged off excessive and uncontrolled use of additives to make the plastic more flexible during recycling.

Satish Sinha, associate director at New Delhi-based non-profit Toxics Link, explains the harmful effects of additives. Exposure to phthalate can adversely reduce the sperm count in males and increase insulin levels while cadmium can harm the kidneys and impair lung functions, he says. Another heavy metal, lead, and bisphenol A and polybrominated dipheyl ether can get deposited in bones and teeth and affect the nervous system, he adds.

Who will bear the burden?

Experts say that Southeast Asia could become the world’s new plastic waste recycle hub. In a commentary published on the ISRI website in 2016, Steve Wong, executive president of China Scrap Plastics Association, said that China could lose recycling markets to Southeast Asian countries. ISRI’S Adler confirmed the same to DTE, so did Fosimpe SL’s Leon, who said, “We are now eyeing Malaysia, Vietnam, Thailand and Indonesia. However, they need to figure out their policies as well for export.” Southeast Asia is one of the fastest growing regions in the world and its recycling factories receive materials from other countries, he explains. The UK and Japan also said their exporters are targeting these nations.

Lower cost due to inadequate environmental, health and safety controls is also driving the shift of the manufacturing base to Asia. “Data from international agencies suggests that Southeast Asian nations, such as Malaysia, Indonesia and the Philippines, have already seen a spurt in the import of plastic waste in the last few months. Like China, these countries do not have tight laws to address health and environment concerns,” Von Glenn Hernandez, global coordinator of Break Free From Plastic, a campaign of over 1,000 environmental groups, told DTE.

Can plastic find its way to India?

As per the UN Comtrade Database updated till April 2017, India is the 10th largest importer of plastic scrap after China and Hong Kong, the Netherlands, Germany, the US, Belgium, Malaysia, Canada, Austria and Taiwan (see ‘Trash sources”). It imports plastic waste in four of the five categories banned by China from over 50 nations, shows data from the Directorate General of Commercial Intelligence and Statistics of the Union Ministry of Commerce and Industry. So can it become a destination for global plastic waste? Experts do not rule it out. “More than $900 million worth of scrap commodities was exported to India in 2016, and we expect that trend to continue,” says ISRI’s Adler. 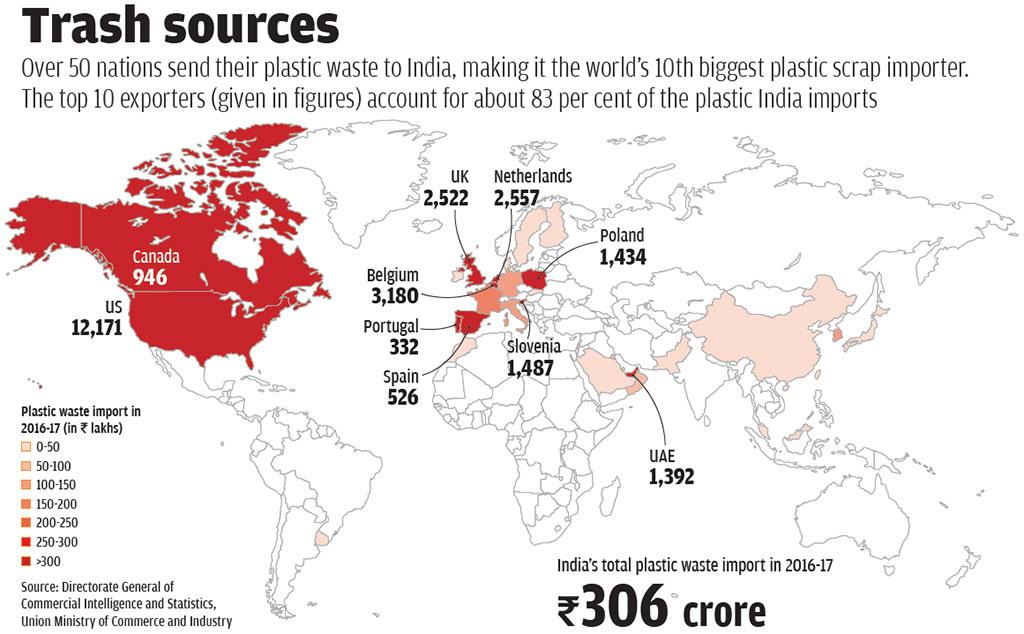 But is India prepared to save its backyard? The country produces 25,940 tonnes of plastic every day of which 15,564 tonnes is collected, according to a reply given by former Union environment minister Anil Madhav Dave in the Lok Sabha in December 2016. As per a 2013 overview of India’s plastic management by the Central Pollution Control Board (CPCB), there are 2,004 registered and 853 unregistered plastic recyclers in the country. These figures do not include recyclers in Chhatisgarh, Bihar, Haryana, Rajasthan, Uttarakhand, Jammu and Kashmir, Sikkim, Tamil Nadu, Laksha-dweep and Daman and Diu because these states and Union Territories did not send data to CPCB. What’s worse, there is no information on the capacity of the recycling plants. “The data on capacity to recycle plastic waste is not available,” replied the Union Minister of Environment, Forests and Climate Change (MoEF&CC) to a question in Rajya Sabha on December 12, 2016. Questions sent to Gyanesh Bharti, joint secretary in MoEF&CC, remained unanswered till the magazine went to print.

India amended its Plastic Waste (Management and Handling) Rules, 2011 in 2016 for “giving thrust on waste minimization, segregation of waste at source by generators, gainful utilization of waste through recycling and recovery”. The thrust of duties lies on local authorities who should create waste management structures but most of the rules remain confined to paper.

However, there is a silver lining. Studies show that India recycles a large volume of plastic because of the involvement of the informal sector in collection. A report by Ranjith Kharvel Annepu, submitted to the Columbia University in 2012, states that India is able to recycle 56 per cent of the total recycleable plastic waste generated. This is a very high percentage, considering that the recycling percentages achieved by many infrastructure-intensive waste management systems in Europe and US are only about 30 per cent, says the report.

The bigger worry, however, is reusability of plastic. “Recent data shows that only 9 per cent of all plastic ever discarded since 1950 has been recycled, and the rest became pollution in landfills, dumpsites, incinerator emissions, or oceans, where it will remain for millennia ultimately,” says a 2018 report by GAIA, a worldwide alliance of more than 800 grassroots groups, non-governmental organisations and individuals in over 90 countries. The thrust, therefore, has to be on reduction of plastic use.

(This story was first published in the 1-15th March issue of Down To Earth under the healdline 'After china, who?').