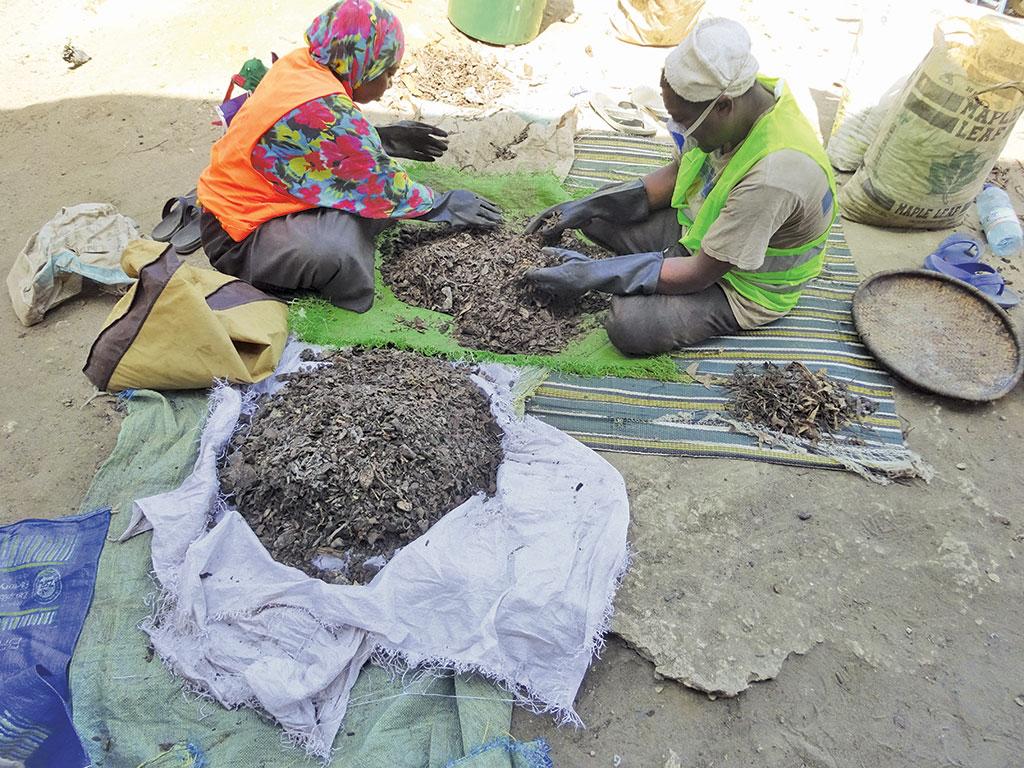 The ªWaste Segregation for Clean Zanzibarº pilot project aims to achieve 100 per cent source segregation of waste like these workers are doing (Photographs: Sonia Henam)

Every morning at 8am, the clanking sound of wheelbarrows reverberate in the narrow lanes of Shaurimoyo in Zanzibar. The three women manning these wheelbarrows visit houses in the area every alternate day to collect household waste. Two hundred houses in the area have received bins and bags for segregation of waste and these are marked with a sticker to keep a track on the progress of segregation. The households segregate waste into wet, dry and domestic hazardous waste and place it in a bin and blue and red bags respectively.

The collection is generally over by 12pm and the workers then transfer the waste to the tipper which has two drums placed on it for taking the wet and dry waste. The tipper takes the segregated waste to the model composting site around 2 kilometers away. The wet waste goes to the composting pit and the dry waste is further segregated into PET bottles, glass, metals, plastic and paper. Zanzibar has become the first island in East Africa to have a model on decentralised waste management. On September 6, 2017, the decentralised pilot project named “Waste Segregation for Clean Zanzibar” under a joint initiative by Centre for Science and Environment (CSE), Zanzibar Environmental Management Authority (ZEMA) and Zanzibar Urban Municipal Council (ZUMC) was inaugurated at Shaurimoyo area, situated 2 km away from Stonetown, a UNESCO World Heritage Site. The objective of the pilot is to achieve 100 per cent source segregation, where wet waste can be composted at the source and dry waste is channelised to recyclers and ensure this is replicated across Zanzibar to make it a zero waste island.

Under the pilot initiative, 200 households out of 626 in Shaurimoyo were mapped by an informal society, the Shaurimoyo Waste Management Society (SWMS), with the help of CSE and ZUMC in July 2017. Eight workers from SWMS have been allotted by ZUMC for the pilot project. ZUMC pays a monthly salary of 80,000 Tanzanian Shilling (TZS) (about US $35) to the society workers. The main responsibilities of the society workers are door to door propagation amongst households, educating them on the importance of segregation and device market linkages for compost.

“With an initial infrastructural support from CSE, three aerobic composting pits were constructed in September 2017. Also, one bin and two bags were distributed to these households during the launch of the pilot,” says Swati Singh Sambyal, Programme Manager, CSE. “Currently, the segregation percentage is over 85-90 per cent,” says Amina Aly Mwalim, a society worker in Shaurimoyo. A tipper has also been provided to the SWMS. “Earlier, there was a challenge to transport segregated waste from households through wheelbarrows to the model composting site due to distance, but due to the provision of tipper the load of workers has been considerably reduced,” says Jaku Abdull Jaku, Environmental Official from ZUMC, who is supervising the pilot.

“A total of about 45-60 kg wet waste is transferred to the composting pits daily while about 30-50 kg of dry waste is collected per week; society member further segregate this dry waste into PET, glass, plastic and paper and store it till desirable quantities are achieved to sell it to a dealer who further takes the recyclable goods to mainland Tanzania,” says Mwanajuma Ngwali Ahmed, head of Shaurimoyo’s society workers. “There is still the challenge of disposal of non-recyclables and multi-layered packaging which are being disposed in the municipal bins. Also, domestic hazardous waste is going to the Kibele dumpsite,” adds Sambyal. 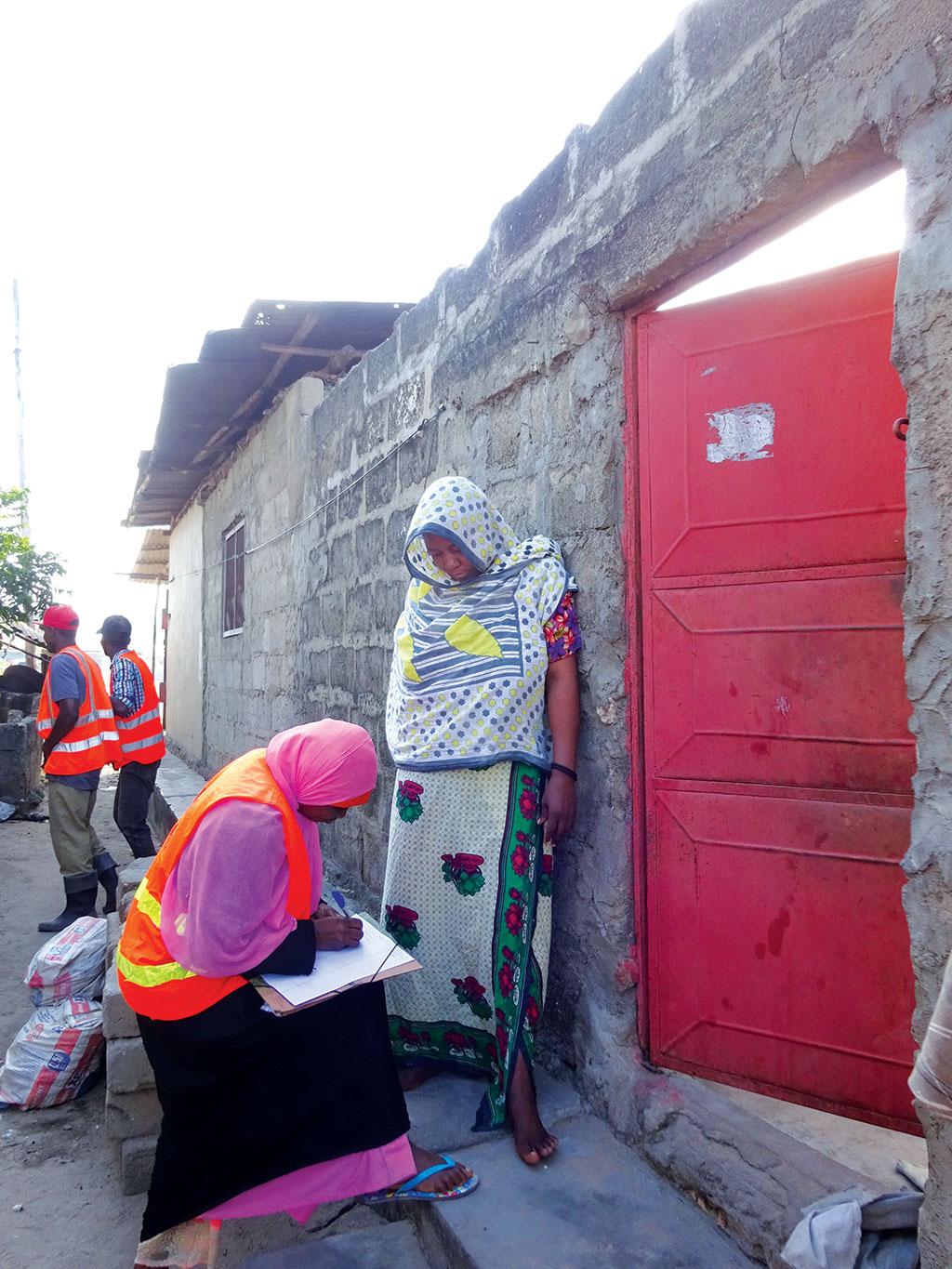 “The pilot project has not only brought employment opportunity to the community but has also empowered the women workers,” says Mzee Khamis Juma, Head Town Planning and Construction, ZUMC. During a short span of time, the workers have been able to sell the compost and dry waste, which acts as an added income to the collectors, he further adds.

The workers have also realised that waste is a resource in disguise. “About 400 kg of dry waste gets collected per month and currently only glass and PET bottles are being sold to the recyclers. The monthly revenue for the waste collector from the sale of dry waste is about 18,400 TZS,” adds Jaku.

To sum it up, this model is incentivising the collector for making efforts to collect segregated garbage from households. Also, ZUMC is exempting user fee for households that are segregating at source in order to incentivise segregation. “The first batch of compost was produced in December and we have sold about 230 packets at 1,000 TZS (US $0.44) per packet during a commercial exhibition by the Ministry of Industry, Commercial and Marketing, Zanzibar,” says Hassan Said Amour, Councillor, Shaurimoyo area. “Many people have started coming and inquiring about the compost as well,” says Hassan. To earn additional revenue, the society workers with the help of ZUMC will start growing vegetables at the pilot site.

Sheha Mjaja, Director General, ZEMA also says, “We will make this pilot project site a model demonstration site where people can come and learn about composting. Our role is to monitor the pilot and analyse the benefits of the project and I am hopeful that the project will achieve greater success in the years to come.”

Zanzibar generates about 230 tonnes/day of waste and 120 tonnes is collected per day which is entirely disposed of in the Kibele Landfill Site at Tunguu in the Central District. While the initiative taken is a good example of how composting and recycling of dry waste can be done through community level, this alone will not be enough. This pilot is just a small step towards pushing Zanzibar to adopt decentralised waste management and have minimal dependence on landfills.

(This article was first published in the 1-15th March issue of Down To Earth under the headline 'Towards Zero Waste').