Understanding body clock can pave the way for better health

MOST heart attacks occur in the morning. Depression and suicidal thoughts peak in the middle of the night. Travelling across time zones makes people feel out of sorts. While these appear to be different observations, there is one interesting phenomenon common to them all: a clock that constantly ticks inside of us.

The biological clock or circadian rhythm is found inside every organism and keeps pace with Earth’s 24 hour rotation. It controls all bodily functions—sleeping, waking up, release of hormones, detoxification, digestion and functioning of the heart and kidneys—and helps plants and animals anticipate changes and adapt. Events that disturb this rhythm, such as late night work shifts, can lead to several health issues.

Scientists have been studying circadian rhythms for over five decades to find ways of reducing and treating diseases. Though there is a greater understanding of the process now, there are many gaps that researchers are working hard to fill. We now know that circadian rhythm is maintained by a master clock in the hypothalamus region of the brain called the suprachiasmatic nucleus. This is controlled mainly by light. But each cell of the body also has its own inherent cycle which works independently of the master clock but is synchronized with it.

Earlier it was thought that the body clock is controlled by products of genes but then researchers found that even blood cells without a nucleus, which houses the genetic material, keep time. John O’Neill of the cell biology division of MRC Laboratory of Molecular Biology in the UK and his colleague Akhilesh Reddy study circadian clocks in human blood cells. “The implication of our findings is that we do not understand the mechanism underlying circadian rhythms as well as it had previously been assumed,” says O’Neill. 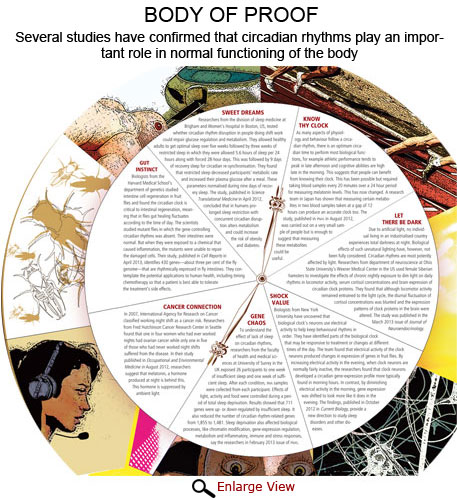 He points out circadian rhythms are more than just an interesting phenomenon. While a body clock desynchronised with the environment can lead to diseases, balancing circadian rhythms can provide an opportunity for treatment.

The field of chronotherapeutics works on the premise that the time of the day when a person takes a drug has a huge impact on its efficacy and side effects. The best known examples are statins that lower cholesterol and cut cardiovascular disease risk. The enzyme that makes cholesterol in liver is regulated by liver’s clock and is most active at night. Therefore, statins, which inhibit the enzyme, are most efficacious if taken shortly before bed time, explains O’Neill.

Ueli Schibler, a professor at the department of molecular biology at University of Geneva, in Switzerland, gives another example. “Certain anti-tumor drugs administered to sick mice in the morning lead to 100 per cent mortality, while the rodents receiving the same dose in the evening all survive,” says Schibler. “This shows how much influence can internal clocks have on the efficacy and toxicity of drugs.”

The scope of chronotherapy does not end here. There is evidence that circadian rhythms are disrupted in women undergoing chemotherapy for breast cancer. But a study, published in Behavioural Sleep Medicine last year, showed that bright light could be used to strengthen the rhythms. For the study, thirty-nine women diagnosed with cancer were divided into two groups. One received bright white light and the other dim red light for 30 minutes every day during the first four cycles of chemotherapy. Results showed that bright white light was better in maintaining the circadian rhythms.

“I am very hopeful that chronotherapy will soon improve cancer treatment efficacy and cut side effects. However, giving an estimate of how long it takes until chronotherapy will expand the life span of cancer patients significantly and reproducibly would be dishonest. We just don’t know,” says Shibler.

What makes the clock tick 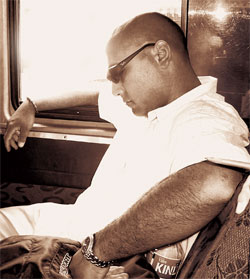 One of the biggest problems in manipulating the body clock to our benefit is that we do not yet know what factors control it. Environmental cues are believed to play a major role. “Our internal clock does not usually keep time all by itself but is continually being adjusted to match the outside world by external cues such as light/dark and when we eat,” says Schibler.

The process is further complicated as body’s response to the environment depends on the type of cells that are involved. Some cell types, like skin cells and those in the suprachiasmatic nucleus, are directly responsive to cues such as ambient light level. Other cell types, however, respond to systemic cues, like hormone secretion, that occur in response to changes in the external environment, explains Shibler.

Shibler and his team work on the effect of body temperature on circadian rhythm. His team has developed a system that allows cells to be subjected to simulated body temperatures cycles. These temperature cycles modulate the expression of a protein called CIRP which is needed for activation of clock genes every day. For humans, impact of temperature is significant their morning and evening body temperatures differ by 1°C. “We have recently demonstrated that such a small fluctuation was sufficient to synchronise cellular oscillators,” explain the researchers. The team’s research was published in Science in August 2012.

The human body manages to deal with short disturbances in the circadian cycle, like those due to jet lag. These, at the most, cause breaks in the sleep-wake cycles, impaired digestion and uncoordinated urine production for a few days. But chronic disturbance, such as in the case of rotation shift work for decades, is a known precursor of diseases.

Countries with low light intensities during wintertime face special problems as many people are unable to adjust their body clock to prolonged periods of darkness and suffer from depression (seasonally affective disorder). Finland is one such country. Researchers at the department of mental health and substance abuse services at the National Institute for Health and Welfare in Helsinki, Finland, gathered nation-wide sample to study how specific chronotypes are related to morbidity risks. Chronotype is an attribute that reflects if a person is morning-, evening- or intermediate-type with regard to his/her circadian rhythm.

“We have found that evening-people—whose peak in physiological activities is timed later than morning- or intermediate-types—are at a greater risk of sleep problems, hypertension, type 2 diabetes, depression etc. They are also more prone to unhealthy habits such as smoking and alcohol usage,” says one of the researchers, Ilona Merikanto. “This may be due to a desynchronization of biological functions as evening-types are forced to be active in times unsuitable for their physiology, since our society promotes morning-larks,” she adds.