The best solutions are always simple. This is well exemplified by the Natural Sugar and Allied Industry, a sugar factory located near Latur, Maharashtra. Due to excellent water management, the factory did not buy a single drop of water for its operation during the sugar manufacturing season of 2002-2003... 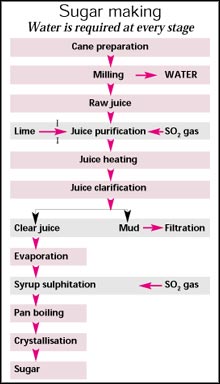 the best solutions are always simple. This is well exemplified by the Natural Sugar and Allied Industry (nsai), a sugar factory located near Latur, Maharashtra. Due to excellent water management, the factory did not buy a single drop of water for its operation during the sugar manufacturing season of 2002-2003; and its water consumption was not meagre -- 500 cubic metres per day purchased for Rs 8,750. The development is significant, as the sugar manufacturing process is extremely water-intensive.

Necessity is the mother of all invention. So was the case with nsai -- scarcity of water led to the endeavour. A persistent drought has been hampering smooth operations of many sugar mills in Maharashtra. In October 2002, just before the commencement of the 180-day long crushing season, B B Thombre, the managing director of nsai, felt it was better to close down operations, than to bear the enormous water cost. However, he firmly believed in a well-known principle -- water saved is water generated. "In the face of a water crisis, it is insane to allow millions of litres of water to flow through the gutters. We cannot generate water, therefore, it is our duty to save this prestigious natural wealth," said Thombre. He decided to use the sugarcane's water to avoid any operational hitches. The cane comprises 70 to 75 per cent of water.

It was a Herculean task, as every step of sugar extraction requires water. Among other things, water is sprayed on the sugarcane to achieve maximum juice extraction while it is being crushed. The mills (crushing machines) are also rotated with help of steam driven turbines. For instance, to crush 114 metric tonnes of sugarcane, 57 metric tonnes of steam is required every hour. The molasses is also purified and crystallised with the help of machines powered by steam.

To start the crushing process, water of a natural reservoir was used. Thereafter, water extracted from sugarcane was utilised. First and foremost, Thombre urged his staff to prevent leakages from all pipelines. He suggested that the exhaust and steam of the boilers should be trapped and the condensed water should be collected and then reused to cool bearings of the mills, clean the juice heater, wash the floor and remove the ash of the boilers. The water used in the turbine and air compressors was also collected in the spray pond and recycled. Treated effluent of the factory and excess water of the spray pond was collected in pits, from where it percolated into a well.

These efforts have proved to be rewarding. nsai's water cost for the entire crushing season used to be Rs 1.5 million. The factory is now able to avoid spending the huge amount. Some newspapers reported the successful endeavour, as a result of which people became curious. Employees of at least 50 sugar industries visited nsai. Nearby factories like Vikas Cooperative and Manjara Cooperative even followed nsai's footsteps.

If all the 170 sugar factories of the Maharashtra adopt such water conservation measures, then large quantities of water can be saved. It is important for the movement to gain momentum in the state, as it accounts for the largest production of sugar in India -- about seven million tonnes out of the 20 million tonnes produced by the country. Thombre's efforts have even influenced farmers to save water while cultivating sugarcane, which also requires huge volume of water. "The development is changing everyone's mindset. This is just the starting," says Krishna Lavekar, district collect of Latur.