Soil moisture works as an indicator of weather extremes 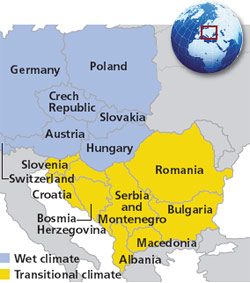 INTENSE heatwaves in July last year scorched much of Europe and several other countries in the Northern Hemisphere. It took many lives, destroyed crops and ignited forest fires. Scientists say climate change will not just influence the average climate but also extremes such as heatwaves. Taking cue a group of scientists in Europe analysed the relationship between soil moisture deficit and subsequent heatwaves.

The evaluation of data revealed that hot summer extremes in southeastern Europe were more intense when the soil was drier. In central Europe little correlation was found between low rainfall or drought conditions and temperature extremes. The scientists concluded that dry soil prolongs and intensifies heatwaves. Compared to wet summers, the frequency of hot days increased tenfold in dry summers.

The radiation will then be reflected back, intensifying heatwaves. If the climate is too wet, soil moisture will play no role, he added. The study was published in the December 12, 2010 issue of Nature Geoscience. As soil moisture builds over a period, its relationship with heatwaves could be used as an early-warning system for weather.

The team also compared their results with the current climate projections. They found the models overestimated the soil moisture impacts on temperature extremes in central Europe. “Climate models predict a direct link between low soil moisture and high temperature and this finding shows that the models are not universal,” said Hrischi.

While soil moisture as an indicator of weather may prove beneficial to farmers in India, no work has been done. “Lack of data is a hurdle for not being able to carry out studies,” said M Rajeevan, scientist with National Atmospheric Research Laboratory, Tirupati.

India Meterological Department (IMD) maintains soil moisture data, but its availability is questionable, he added. There are 43 weather stations to manually collect data at present but IMD has not generated any soil moisture map. “Under a modernisation effort IMD plans to open new weather stations with soil moisture sensors in some,” said K K Singh, scientist with IMD.