The Central Water Commission has compiled and averaged a decade (2001-2011) of water quality data, collected from 371 monitoring stations located at all major, medium and minor rivers in India. The report, made available recently, but published in August this year, has identified hot spots or stretches of rivers where certain water quality parameters have been found to exceed permissible limits (see map). 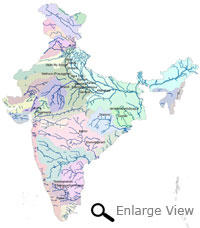 The report classified the river stretches as per the Central Pollution Control Board’s (CPCB) criteria, and ascertained whether it was fit for bathing. According to the data, 17 monitoring stations were found to have dissolved oxygen levels below what is considered fit for bathing. The biochemical oxygen demand (BOD), an indicator of oxygen depletion in a water body, too, was found beyond limits in 37 of the 371 water quality stations.

Authorities have been unable to reduce the gap between sewage generated and treatment infrastructure. But the Centre has often backed up its river pollution abatement efforts and programs. Jayanthi Natarajan, Union environment minister on November 28 claimed in the Lok Sabha that organic pollution loads have reduced in river stretches. Yet as per CPCB data, less than a third of the estimated 38,254 million litres of sewage generated each day in Class I & Class II towns of the country is currently being treated; additional sewage treatment capacity for 26,467 million litres per day needs to be created to bridge the gap. Abstraction of water for irrigation, drinking, industrial use and power compounds the challenge, leaving lesser freshwater for dilution of rivers.


CPCB officials choose not to comment on the report although they did say that the data was “abnormal” and portrays a better picture than is the case. “The biggest problem with the programme and data collection is that it measures general parameters such as temperature and pH. Pollution related parameters, which are of greater concern and indicate whether water is safe for consumption, are generally missing,” says R C Trivedi, former additional director of CPCB. The data on coliform bacteria counts for instance, which indicates pathogenic pollution, is limited, he adds. Although the report does not detail bacteriological data, it does mention that most river stretches have high coliform bacteria counts primarily due to the discharge of untreated sewage, as well as other sources including open defecation, cattle wallowing and disposal of animal carcasses.

Trivedi raises another point: “The samples are collected by the field team and delivered to the laboratory after a long holding period without preservatives”. Many laboratories do not have the requisite equipment such as incubators to measure organic pollution parameters either, he adds.

The Water Commission has different levels and capabilities in its stations. A majority 258 out of the 371 stations can only monitor six standard parameters such as temperature and dissolved oxygen. The remaining are, however, equipped to record physico-chemical and bacteriological indicators, essential to gauge pollution. The location of the monitoring stations as well as the date of sampling and protocol is different from the one followed by CPCB. “The hydrology and monitoring stations too are not always in the city or immediately downstream, so we may not always get the correct picture,” says Anupam Prasad, director water commission’s river data directorate.
Web Specials Web Specials Web Specials Water Quality Water Pollution Union environment … Sewage treatment capacity Sewage Organic pollution Lok Sabha Jayanthi Natrajan Drinking Water Drinking Water Drinking Water Dissolved oxygen Coliform Central Water Commission Central Pollution … Central Pollution … Biochemical oxygen demand
Donate Now