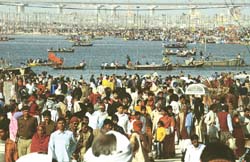 RELIGIOUS gatherings such as the Ardh Kumbh at Allahabad always test the organisational mettle of local administrative bodies. This event happens once in six years at the sangam (confluence) of the Ganga, Yamuna and the mythical Saraswati (see map Sacred waters are dirty). This year, as in the past, the authorities had to ensure the well-being of pilgrims; they also had to address concerns over deteriorating water quality by ensuring adequate and clean water at the sangam. The feebly flowing Ganga, which had taken on an unsettling deep red hue in the last few months, was a cause of much bother.

Responding to a petition filed by Swami Chaitanya Bhramachari of the Amethi-based Srimad Paramhans Ashram, the Allahabad High Court ordered a three-pronged strategy to address the problem release of water from upstream sources stopping effluent discharge from tanneries located upstream in Kanpur, tapping drains and redirecting domestic sewage within Allahabad itself. In an order dated December 13, 2006, the court directed the Uttar Pradesh government to release 1,000 cusecs (cubic feet per second) of water from the Narora barrage into the Ganga the idea being to dilute the concentration of pollutants in the river and improve the water level.

The Narora barrage, located in Bulandsahar district, roughly 300 km upstream from Allahabad, began releasing water from the next day. This did not improve matters over the next week, water level fell by 3 inches. While some allege that water was not released, others believe that it was illegally extracted en route for irrigation. On December 21, 2006, the court ordered that the amount be increased to 1,500 cusecs this was revised to 2,500 cusecs on January 6, 2007. Varying amounts of water were also diverted from other barrages in Uttar Pradesh.

While officials scrambled to ensure clean water in time for the shahi snan on January 14, 2007 discontentment among religious groups mounted. Chaitanya Bhramachari along with other members of his ashram threatened jal samadhi (mass suicide) if things did not improve.
The court also forbade tanneries in Kanpur from releasing untreated effluents into the Ganga. Kanpur has 354 tanneries that generate about 9 million litres of effluents per day (mld). According to A K Singh, assistant scientific officer Uttar Pradesh Pollution Control Board, 48 tanneries had been shut down for the duration of the Ardh Kumbh. Officials, however, assert that the entire blame cannot be laid upon the tanneries. Says Singh, "The Ganga's reddish colour is due to the release of effluents in the Dhela and Kosi rivers flowing in from Uttaranchal. There are a number of paper and distillery units along their banks. The discolouration caused by these factories persists over long stretches since the effluent is soluble, unlike suspended particles which tend to settle down over long distances."
Protests by the religious groups finally bore some fruit as the river's appearance improved, and its level also registered an increase in the subsequent days. The religious groups have been placated momentarily at least, but they know the fight is not over. "We are happy the government has taken some action but our's is a much bigger struggle. We have to ensure that the Ganga is clean throughout the year, and not just during the mela," says Chaitanya Bhramachari.

Inspite of the improved appearance of the Ganga, the river's water quality was not good enough for bathing. Data compiled by the Central Pollution Control Board (cpcb) reveals that the biochemical oxygen demand (bod)--a measure of biodegradable organic matter--was higher than the maximum permissible bathing levels of 3 mg/l. At the sangam the recorded bod was 5.2 and 5.3 mg/l on January 14 and 15, 2007 respectively. These figures are almost same as the annual average bod of 5.6 mg/l during 2006 measured by the National River Conservation Directorate. So, adding freshwater hardly improved matters.


For the duration of the Ardh Kumbh, the court ordered tapping two major sewage drains emptying into the Ganga in the immediate vicinity of the sangam. As per the city development plan (cdp) of the Allahabad administration, during 2006, the city's sewage output was 250 million litres per day. Only 60 mld is treated, so 190 million litres of untreated sewage from Allahabad flows into Ganga and Yamuna everyday.

As per the cdp, 49 drains transport the wastewater. However a study conducted in 2006 by the Sankat Mochan Foundation, a Varanasi based ngo mapped 69 points within the city where untreated sewage was being dumped into the rivers, 60 of these being upstream of the sangam.

The mela itself has a significant impact upon the river quality. Toilet arrangements included 25,000 glazed and cement seat lavatories, 50,000 deep trench pattern lavatories and 4000 urinals. What was lacking, however, was treatment and disposal of sewage collected in these toilets. Though the officials claimed to have installed soak pits and septic tanks, but several sewage cesspools were visible at many places, sewage flowed into the river at others.

The restoration effected for the Kumbh was temporary. Also, water was diverted for the event at the cost of irrigation projects upstream and cultivators there are reportedly affected, adversely.

All this raises serious questions about the Ganga Action Plan (gap) launched in 1985 Rs 1,453 crores out of an outlay of Rs 2,848 crore was spent on the programme till 2005. Only a quarter of the Rs 32 crore allocated to Allahabad under the gap has been spent. gap also has not caught up with the sewage generation in 2005, 8,250 mld of sewage was generated in the Ganga basin, but there was treatment capacity for about 4,000 mld. Even the installed hardware is underutilised and badly maintained. Will matters improve before the next Kumbh?