10.5 per cent rural households spend over 30 minutes to get water every day

Close to 42 per cent rural households travel every day to fetch drinking water. The distance they cover ranges from less than 0.2 km (30.4 per cent households) to over 1.5 km (0.5 per cent households) one way, suggests the recently released 76th round of National Sample Survey Office. This means rural India has households whose members travel more than 3 km (round trip from the primary water source) each day to get water. A rough calculation suggests that these households cover a distance of over 1,000 km a year—one way trip from Delhi to Patna by road—to get drinking water. 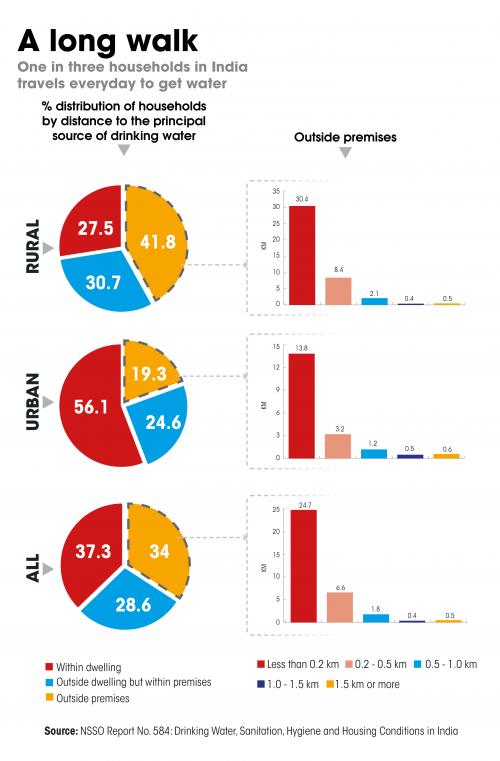 At 11.4 per cent households, Haryana has the maximum households whose members walk over 500m to fetch water. Considering that it's mostly the duty of the women of the household to fetch water, it means that rural women still walk at least over 182 km every year, which is nearly the distance between Noida and Agra. States, where the situation in rural areas is particularly bad, are Jammu and Kashmir, Kerala, and Manipur where 57.1 per cent, 44.5 per cent, and 40.7 per cent women walk over 30 minutes to access drinking water.

In the past few years, the number of rural households having drinking water facilities outside the premises has reduced. During the NSSO 69th round, the share was 53.9 per cent rural households, which has come down to 41.8 per cent. In urban areas, there has been a drop of 3.9 percentage points.