A monsoon after two droughts

In a year of severe drought, India witnessed one of its worst floods

For a Down To Earth journalist, chasing the monsoon is a round the year job. At the beginning of May, the newsroom starts to feel the arrival of the monsoon, much before the India Meteorological Department (IMD) comes out with its annual forecast, and monsoon clouds Indian sub-continent boundaries.

Phone calls are made to scientists, both in India and outside; the library is put under much stress to follow recent scientific studies on monsoon; and weather folklores are re-interpreted to get a tentative answer to a question that everybody in India wants to know: Will the monsoon be normal?

This question often assumes desperate proportion. Like in 2016. For the two preceding years, India reeled under severe droughts that impacted over 400 million people. For the 0.2 million villages without any water sources inside their geographical boundaries, hope of a good monsoon in 2016 was the most precious commodity.

IMD granted this wish and announced that the 2016 monsoon would be above normal. But, what does it mean? Monsoon is the meteorological equivalent of Dr Jekyll and Mr Hyde. As focus shifted to harvesting the maximum water from a normal monsoon in three years, there was something happening in the north-eastern part of India that blatantly delivered a message everybody ignored. By the end of August, some 20 states reported floods, most of them breaking historic records in intensity.

Nobody took notice when floods hit Assam in April 2016. A new government was just sworn in and the media did not pay much heed to the unusually high pre-monsoon rain. Everyone thought the rising waters of the Burhidehing and Desang rivers would subside. It did not happen. The flood continued till the end of August, covering more than 90 per cent of the state and affecting over four million people.

“The 2016 pre-monsoon rainfall was very strong, both in terms of the absolute rainfall and its geographical coverage,” says DC Goswami, former head of the Department of Environmental Science, Guwahati University. According to the National Remote Sensing Centre, Hyderabad, heavy rains in the fourth week of April caused the first “wave” of floods in Assam.

Experts say the heavy pre-monsoon showers have provided the clinching evidence of the increasing frequency of western disturbances that bring the rain. According to the regional meteorological centre, Guwahati, rainfall in the state was 21 per cent above normal in March-April.

What is frightening is the fact that such unusual rain will become more common with climate change. “It is the pre-monsoon showers, rather than the monsoon, which will increase because of global warming,” says Subashisa Dutta, professor at the Department of Civil Engineering, IIT-Guwahati. In 2012, Dutta studied the impact of climate change on floods in the middle Brahmaputra region and found that the peak discharges from the river, the average duration of a flood wave and the intensity of pre-monsoon showers are likely to rise during 2071-2100.

It is quite ironic that Assam witnessed floods when its total monsoon rainfall between June 1 and August 16 was 25 per cent below normal. So, what caused the flood? Data suggests that most floods were preceded by extreme rainfall events (see ‘Under water’). imd divides extreme rainfall events into two categories: rainfall of 124.5-244.4 mm in 24 hours is “very heavy” and rainfall more than that is “extremely heavy”. In July alone, Assam recorded six “very heavy” rainfall days. By July 25, the Central Water Commission (CWC) had declared moderate floods in three districts of the state where the Beki, Sankosh and Brahmaputra rivers were flowing above the danger mark. 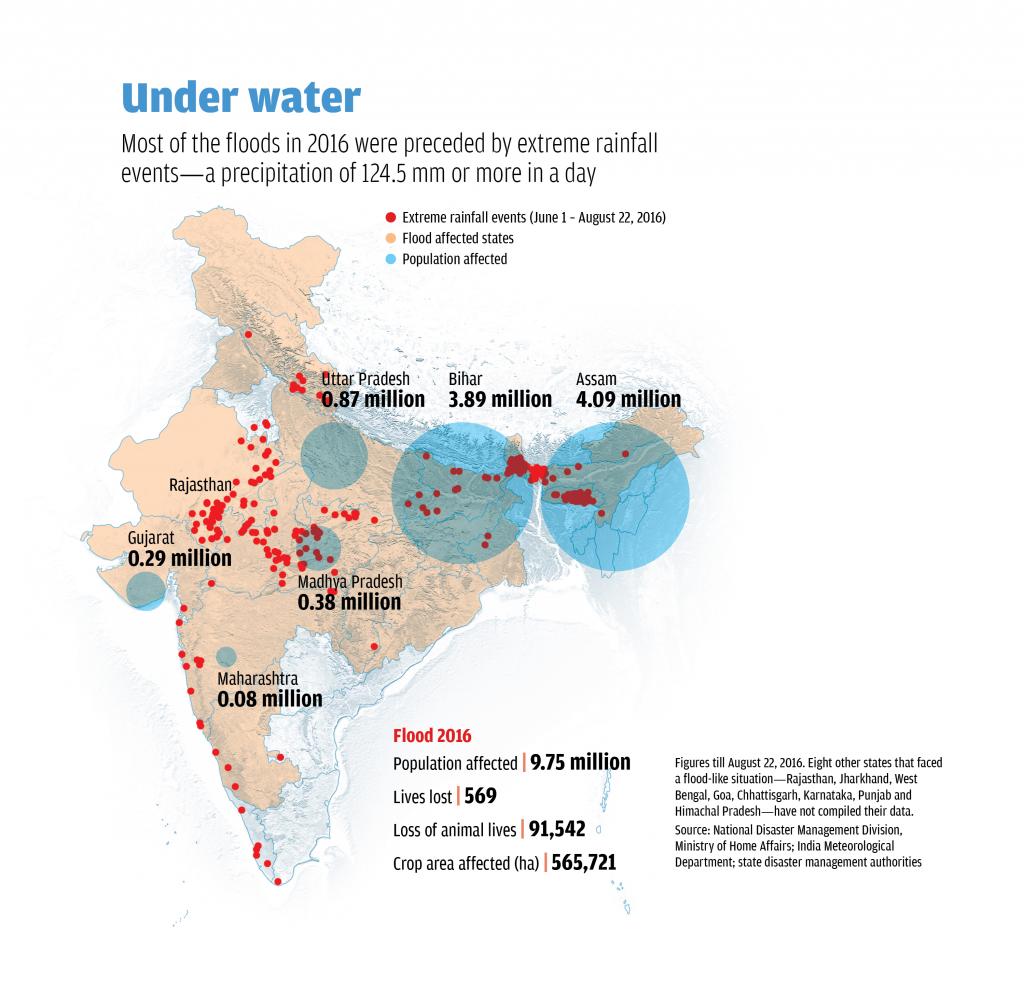 Arup Kumar Sarma, professor at the department of civil engineering, IIT-Guwahati, says the 2016 floods were unusual in another way: They seem to have caused more damage. “This is because the direction of the storm and the direction of flow of the river was the same. In such a situation, rains directly contribute to the rise in water levels,” he explains.

However, there is not enough long-term data to claim that extreme rainfall events have increased over the years. For instance, in Assam, no significant trends in 24-hour rain were observed between 1951 and 2010, says the state’s action plan on climate change. The report, however, states that extreme rainfall events in Assam may increase by 5-38 per cent and incidences of floods by 25 per cent during 2021-2050.

Apart from Assam, floods impacted nearly five million people in 19 states by the third week of August. Most of these were triggered by the first monsoon showers. Remarkably, just before the floods, some of the states were hit by droughts. In Madhya Pradesh, floods came after a drought in April-May.

Until June 8, 2016, the monsoon had hardly covered the state and  imd had forecast severe to very severe heat wave in some parts. But on July 12, the 24-hour rainfall in Burhanpur and Betul districts was an astonishing 1,135 per cent and 1,235 per cent above normal respectively. By July 18, more than 35 lives were lost and nine people went missing as 23 districts in the state faced flood-like situation.

Again, on August 20-21, Bihar’s 12 districts witnessed extreme rain events. In Sagar, the Khurai meteorological station recorded 187.2 mm rainfall on August 20. Ken and Tamsa rivers were flowing above the danger mark due to heavy rains in Panna and Rewa districts. The total death toll in the state due to rain-related accidents from the beginning of the monsoon season to August 22 stood at 102. Similar was the case with Bihar where the cumulative rainfall between June 1 and August 22, 2016, was 15 per cent below normal.

However, 3.8 million people in 23 districts, including Patna, were facing floods by August 21. The Ganga was flowing above the danger mark in Buxar, Munger, Khagaria, Siwan and Katihar. Bihar Chief Minister Nitish Kumar said silt deposition in the river after the construction of Farraka dam in West Bengal caused the rise in water levels.

However, D K Mishra, head of Bihar-based non-profit Barh Mukti Abhiyan, says, “Since 2007, the cumulative seasonal rainfall in the state has been abnormally low and the 2016 flood was caused by heavy precipitation in Nepal”. Regardless, the state did see extreme rainfall event on 11 days in June-July. On July 31, the Madhwapur meteorological station recorded 200 mm rain.

In the adjacent state of Uttar Pradesh too, the Ganga was flowing above the danger mark in Mirzapur, Ballia and Varanasi districts while parts of Allahabad were inundated on August 21, 2016.

In Rajasthan, conditions were under control till July. “In August, the intensity of rainfall shot up like never before,” says YP Mathur, professor at the department of civil engineering, Malaviya National Institute of Technology, Jaipur. On August 11, 2016, the rainfall in nearly half of the districts was more than 100 per cent above normal.

Pali and Sikar districts received a phenomenal 1,059 per cent and 1,100 per cent above normal rain. According to local newspapers, rainfall in Jodhpur was the heaviest in the past 90 years. The gates of the Bilaspur dam had to be opened to drain water into the Banas river to prevent flood in Tonk district. Extreme rainfall events were again recorded in

16 meteorological stations of the state on August 20-21. According to Rajasthan’s draft action plan on climate change, published in 2010, the frequency and intensity of extreme rainfall events in the state is likely to increase by 20 mm a day during 2017-2100.

Scientific studies point out that while monsoon rain is decreasing in India, extreme rainfall events are increasing, particularly in July-August. A paper published in Nature Climate Change in 2014 states that the intensity of extremely wet spells and extremely dry spells during the South Asian monsoon season have been increasing since 1980.

“We are looking at rainfall extremes that only occur at most a few times a year, but can have very large impact,” says Noah Diffenbaugh, senior fellow at the Stanford Woods Institute for the Environment, under whom the study was conducted. The team compared data collected by imd and other sources over the past 60 years for July and August. It found that the average rainfall over Central India has reduced from 10 mm a day to about 9 mm a day. However, the day-to-day variability in rainfall in these months has increased, leading to periods of heavy rainfall or prolonged dry spells.

Apart from causing loss of life, floods are a huge financial drain. They are the biggest threat to agriculture, impacting 7.5 million hectares (ha) of farmland every year, particularly in agrarian states like Uttar Pradesh, Bihar and Assam. In Assam, close to 0.1 million people move to relief centres every year. Same is the case with Bihar, where thousands spend four to five months in camps.

According to an analysis by Down To Earth, state governments of Assam and Bihar are officially involved in flood relief and rehabilitation works for seven months every year. And it is likely to get worse. Data shows that flood-affected areas in the country have increased by 162 per cent since 1960.

The average annual flood damage has also increased by over 160 per cent — from R1,805 crore a year during 1947-1995 to R4,745 crore a year during 1996-2005, according to the National Disaster Management Authority. Though there are no recent estimates, it would not be wrong to assume that with growing urbanisation, the damage would have only gone up in the past decade.

According to a working group on flood management, set up by the erstwhile Planning Commission in 2011, R1,26,000 crore have been spent on flood control in the country since 1953 and the economic loss caused by floods has been R8,12,500 crore at 2011 prices. The working group said that this cost would go up by 10 per cent every year.

This means that in 2015, the total cost would have been R11,46,940 crore, or 7.6 per cent of India’s estimated gdp for 2016-17. To make matters worse, the states do not take the problem seriously since the Constitution does not mention flood management under either the Union, State or Concurrent lists.

“States give damage estimates only to avail relief packages from the Centre,” says a cwc official, requesting anonymity. During the tenure of the working group, only Bihar, Assam, Rajasthan and Kerala took part in the deliberations. Of these, two states did not attend the deliberations after the first meeting. Even five years after the Planning Commission gave its estimates on the total flood damage in the country, the states have not confirmed or denied their accuracy.