A quick fix: How ponds built under MGNREGA turned lives around 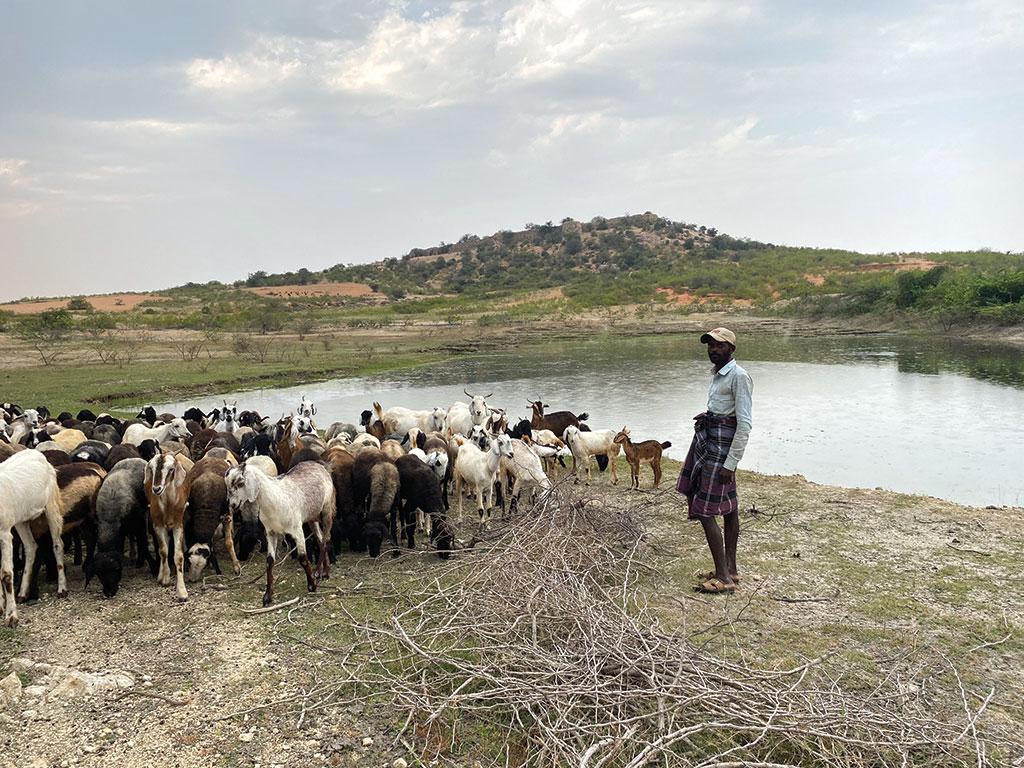 For Tippeswamy of Ramadurga village in Karnataka’s Chitradurga district, ponds like these are necessary to rear cattle (Photographs: Tamanna Naseer; Adithyan PC)

For Tippeswamy of Ramadurga village and his 150 goats, the grazing land adjacent to the village community pond, or gokatte, is a source of relief. Every day at about 10 am, they march towards the pond and the goats stay there until sunset.

“This place is like an oasis for my goats,” he says. Ramadurga village is in Karnataka’s Chitradurga district, one of the driest in the country. Before 2006, people here mostly depended on borewells. They still do as the gokatte built under MGNREGA in 2006 holds water for only six months a year. Still, residents say, the programme has improved their lives.

“My family managed to sell 50 goats in the pandemic year because of the gokatte that provided us with enough water to grow fodder for our goats. We sold each goat for Rs 6,000-10,000,” he says. Though goat rearing is one of the primary sources of income in Ramadurga, people have now started growing papaya, pomegranate, flowers, onion, groundnut and ragi.

Tippeswamy manages to earn Rs 2.5 lakh a year by selling his farm produce. His family of eight sustains on this income. Residents say this has been made possible because of a number of community ponds, bunds and check dams built across the village under MGNREGA since 2006. With more water available than before, the focus since 2016-17 has shifted to creating individual farm ponds, trenches and bunds, and desilting rajakaluve (traditional drainage structures).

A similar formula of first constructing community assets and then private ones has worked even for the residents of Hirekerekavalu, a hamlet in Gollahalli village of Chitradurga.

Hirekerekavalu residents undertook only community water conservation works between 2006-07 and 2015-16. In all the years since, the focus has been on the construction and repair of private water structures. A striking feature in Gollahalli is the presence of multiple water tanks for domestic animals.

Panchayat officials and village residents point out that these water storage facilities have added to the prosperity of local people as goat rearing has become comparatively easier. Further, the construction of krishi hondas (farm ponds) has helped recharge borewells. 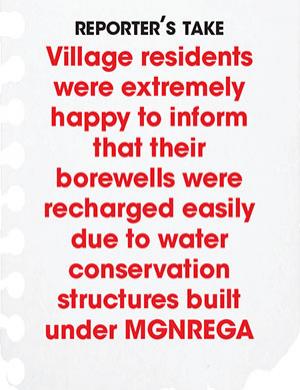 “I got a krishi honda two years ago and have since been growing onion, ragi and groundnut in my 0.8 hectare land. This has been possible as now my field has water almost round the year. During the few months when the krishi honda goes dry, I depend on borewell,” says 60-year-old Ramappa, a resident of Upparahatti, another hamlet of Gollahalli.

These farm ponds built under MGNREGA are 12-metre long and 12-metre wide with a depth of 3 m. The demand for such ponds has increased in recent years as farmers see it as a quick-fix solution for storing as well as recharging groundwater. Each farm pond stores 0.1 million litres of water, say local officials.

TH Santosh, assistant director of the Challakere taluk, says in villages like Ramadurga and Gollahalli, water is now available at 100 m below the ground level in the vicinity of water structures built under MGNREGA. Earlier it was almost 200 m below the ground, he says.

NJ Devaraja Reddy, a Chitradurga-based hydrogeologist, says high wind velocity and uneven rains hinder groundwater recharge and rejuvenation in the region. “Yet, 50-60 per cent of the projects under MGNREGA are working satisfactorily. The efforts have not also reduced the fluoride content in groundwater.”

Despite its successes, the gram panchayat faces a unique struggle. Several of the structures are defunct.

A majority of the trenches and bunds collapse after a season of heavy rains.

“In the current action plan, we have for the first time introduced a proposal to maintain assets created under the scheme,” says Dhananjay P T, assistant director, Chitradurga taluk. Almost 15 per cent of the MGNREGA funds for 2020-21 are used for maintenance work in Chitradurga.