All alien invasive species are guilty until proven innocent 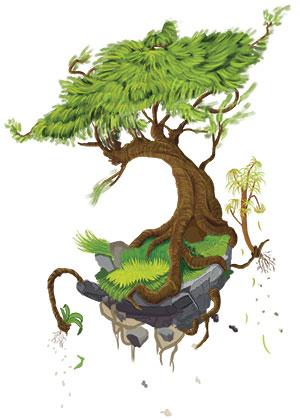 As nations raise political barriers (in some cases fortified by concrete) on their borders, these are undoubtedly terrible times for immigrants. The same xenophobia colours our attitude to less exalted earthlings—what are pejoratively called invasive alien species. In a typical illustration of this outlook, the Delhi government recently decided to purge the city’s forests of a grasping bully called the vilayati kikar (foreign acacia) which, ecologists say, has created a monopoly over 80 per cent of the capital’s ever-thinning woods by squeezing out native flora and fauna, especially its desi cousins.

Scientists believe, and desperately hope, that weeding out the invasive and re-introducing the disappeared natives would somehow revive the old rhythms and patterns of the forest.

Vilayati kikar or vilayati babool, as the name suggests, is an imported plant variety hailing from Mexico, where it is known as mesquite. Taxonomists know it as Prosopis juliflora, one of 44 known species of the genus Prosopis. Like thousands of other species, it too rode on the Empire’s bandwagon and settled in foreign lands across the world. The British brought it to Delhi in the early 1900s and it spread like wildfire as it could survive in hostile conditions such as drought. Ironically, the same virtues lowered groundwater tables and killed off native species.

Be that as it may, one cannot quite tell if one should treat the mesquite as hero or villain. In the 1970s, international agencies like the UN hailed it as the “wonder tree” that could potentially arrest the march of the advancing desert in sub-Saharan Africa. The sales pitch was irresistible: among other things, villagers could use it as firewood; it could improve soil quality by fixing nitrogen; and, birds would build bowers in it. No surprisingly, within two decades it had became a common sight in many arid regions of the world, including India.

It also became an important source of livelihood as well as business for many communities. For instance, in India, the vilayati kikar accounts for 75 per cent of the fuelwood needs of villagers located in dry regions like Rajasthan and Kutch. In Tamil Nadu and some parts of Kenya, some entrepreneurs have created a lucrative business out of selling kikar wood as charcoal to the local industry. And in South Africa, a private company is making a huge profit out of selling mesquite seeds as a medicine that can stabilise blood sugar levels.

However, the honeymoon was short-lived. In a 2013 book on African’s invasive alien species, a UNEP consultant wrote that “most introduced Prosopis species have turned out to be relentlessly aggressive invaders” and that they were shaping “new green deserts” by depleting water tables and pushing out native species. In fact, in 2005, a Kenyan community even sued the Food and Agriculture Organization and the Kenyan government for bringing mesquite to Kenya.

So just as it was lauded as a “wonder tree” to begin with, now it was demonised as the “devil tree,” which explains the current madness to stamp it out across the world. This flip-flop raises some prickly questions about how we understand alien invasive species and whether we can restore damaged ecosystems. That alien species are dangerous is a relatively recent notion. It was alien to most cultures until the turn of the 20th century when scientists started thinking of ecosystems as intricately assembled machines in which each native species is a unique cog performing a pre-ordained function as prey, predator, parasite, or scavenger.

In other words, it is so tightly knit that there was little room for an interloper to do anything useful. So if a foreigner does make unfamiliar ecosystem its home, it is likely to push out a native species, often forever. Viewed from this perspective, all alien species, as science writer Fred Pearce put it in his provocative The New Wild, “are guilty until proved innocent.” This doctrine drives most conservation projects today with ambitious plans to restore habitats by cleansing them of alien species—goats on Galapagos Islands, all predators on New Zealand, and most invasive trees in South Africa, to name a few.

But there is backlash brewing against the dogma that treats aliens as evil and natives as good, which is nurtured by several myths about nature. That nature is stable and balanced until humans disturb it is the first enduring myth of modern conservation. In this scheme of things, aliens are automatically rendered persona non grata. Heretics, however, believe that there is no such thing as balance of nature, and hence there is no need to fear aliens. In fact, they might play a crucial role in conserving nature.

The other enduring myth is that nature is pristine. But the truth is, as the British landscape historian, Oliver Rackham, writes, “most of the world’s land surface results from long and complex interactions between human activities and natural processes”. In the Anthropocene epoch, the traditional line dividing the natural from the human is blurred forever.

A good example of this blurring is the remarkable revival of abandoned degraded forests in Puerto Rico. The novel ecosystem, as such landscapes are called now, was mostly embellished by colonists that, freakishly, also helped some of the natives to bounce back. Many renegade ecologists believe that novel ecosystems fashioned from large swathes of degraded habitats around the world is the future Anthropocene.

Given the new thinking on alien species, the ecologist’s dream of restoring Delhi’s damaged ecosystem by knocking out the vilayati kikar appears a little deluded. However, while it is alright for us to fashion nature according to our needs or aesthetics or politics, we must be clear that, as Pearce reminds us in his book, “when we do this, it is for ourselves, and not for nature, whose needs are usually rather different”.

(This article wad first published in the 16-31st July issue of Down T o Earth under the headline 'Mythical aliens').