Agara, Bellandur and Varthur lakes are facing the dual threat of pollution and encroachment 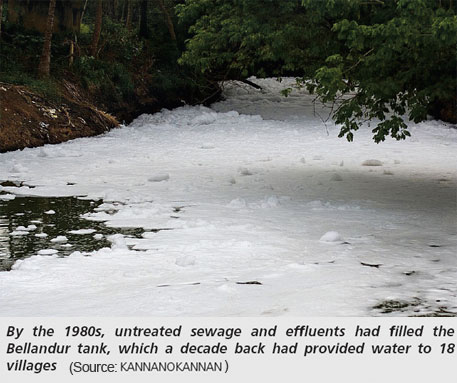 Bengaluru, the city of lakes, is making headlines for all the wrong reasons. A few weeks ago, the city’s Varthur lake made news when huge masses of foam were seen floating on its waters. Experts say raw sewage flowing into the lake caused the foam to form. A few days later, media was abuzz with reports of the foam in Bellandur lake catching fire.

Agara, Bellandur and Vathur lakes are connected to each other and the flow of one lake passes on to the other, says Shridhar Pabbisetty, chief executive officer of Namma Bengaluru Foundation, a Bengaluru-based non-profit. Pabbisetty explains that a huge amount of sewage flows from Bellandur lake to Varthur lake because of the failure of Bangalore Water Supply and Sewerage Board (BWSSB) to manage the sewage of the city.

Vaman Acharya, chairperson of Karnataka State Pollution Control Board (KSPCB), also blames BWSSB for mismanagement of the sewage. He says oil continuously spills into the Bellandur lake from the garages and motor service centres along its banks. Methane gas produced from the heavy load of sewage is unable to escape into the atmosphere due to heavy accumulation of foam over the water body. In such a situation, any small trigger is enough to cause a fire, explains Acharya.

Leo Saldanha, coordinator of Bengaluru-based non-profit Environment Support Group (ESG), explains that the main problem is the lack of a sewage management plan for the city. Acharya says around 600 million litres per day (MLD) of sewage is diverted to the sewage treatment plants near this three-lake system. Only 200-220 MLD sewage gets treated and the rest flows into the lake system.

KSPCB, which monitors the water quality of the lakes, says that the water in the lake is loaded with domestic sewage and that there is no stress of any heavy metals on the lake’s water. The water quality of the lakes is not even suitable for outdoor bathing. The Biological Oxygen Demand of the lake is much higher than the standard value set by Central Pollution Control Board for outdoor bathing (3 mg/l). A report by KSPCB shows that the Bellandur lake had consistently high Biological Oxygen Demand (BOD) during the dry period (January-February) between January 2013 and January 2015. It never went below 7mg/l during this period. There were also traces of total colliform in the lake’s water.

Bengaluru’s lakes are facing the dual threat of pollution and encroachment. Bellandur, a 130-year-old water body, is part of the Bellandur drainage system that drains the southern and the southeastern parts of the city. Water from this tank flows further east to the Varthur tank, from where it goes down the plateau and eventually into the Pinakani river basin.

In the 1970s, people from 18 villages depended on the waters of this tank. But by the 1980s, the chain of tanks feeding Bellandur had broken up. Rainwater did not recharge the tank. Instead, untreated sewage and effluents flowed into the water body. In 1997, fisher folk groups from Yemlur, Kempapura and other places filed a petition against the then chief minister of the state as the polluted tank was affecting the fish yield. The petition was passed on to the fisheries department, which released fishlings into the tank to increase their production. But the fishlings did not survive.

In 1999, the Karnataka High Court ordered BWSSB to supply potable water to residents in Bellandur and to ensure treatment of sewage. But nothing changed. A contempt petition was filed. The case is pending before the Lok Adalat. Recently, there was a huge protest by village residents to make the lake encroachment-free.

T V Ramachandra of Centre for Ecological Sciences at the Indian Institute of Sciences, Bangalore, says that Bellandur also faces the threat of an upcoming SEZ. When the project becomes operational, it will not only encroach upon the lake bed but also increase the threat of flooding in the area. A break in the connection between the lakes will lead to the loss of Rajakaluve (storm water drains) and, hence, it will not be possible to manage the overflow of the lakes.

Lake Development Authority (LDA) is awaiting reconstitution as Lake Conservation and Development Authority so that it may have legal powers to save lakes from encroachment and pollution. But it says that only legal powers won’t be enough to tackle the problem of mismanagement of the lakes. E E Nagraj, a senior official of LDA explains, “Bellandur lake is under different agencies. The drains that bring in rainwater are managed by Bruhat Bangalore Mahanagara Palike (BBMP) and the catchment of the lake is under the revenue department. An integrated plan has to be in place involving BBWSB, BBMP, revenue department and LDA to save lakes like Bellandur.”