Sustainable sourcing of water to bridge the demand-supply gap can address the looming water crisis in the Hindu Kush Himalayan (HKH) region, according to a study. Increasing budgetary allocations for revival and protection of springs and water harvesting could help achieve this.

Better water governance was also needed in Himalayan cities and towns, according to the study by International Centre for Integrated Mountain Development (ICIMOD) and others. Inefficient models were one of the major contributors to skewed water distribution in the region.

The study published in journal Water Policy advocated a polycentric governance system, involving multiple governing bodies and institutions to ensure access to water needed to be looked into.

It also stressed that women’s role in water management, particularly in planning and decision-making processes, needed to be reviewed and strengthened.

Five such towns were in India — Mussoorie and Devprayag in Uttrakhand; Singtam in Sikkim; Kalimpong and Darjeeling in West Bengal.

The remaining eight towns were Kathmandu, Bharatpur, Tansen, Damauli in Nepal; Muree and Havalian in Pakistan; and Sylhet and Chittagong in Bangladesh. 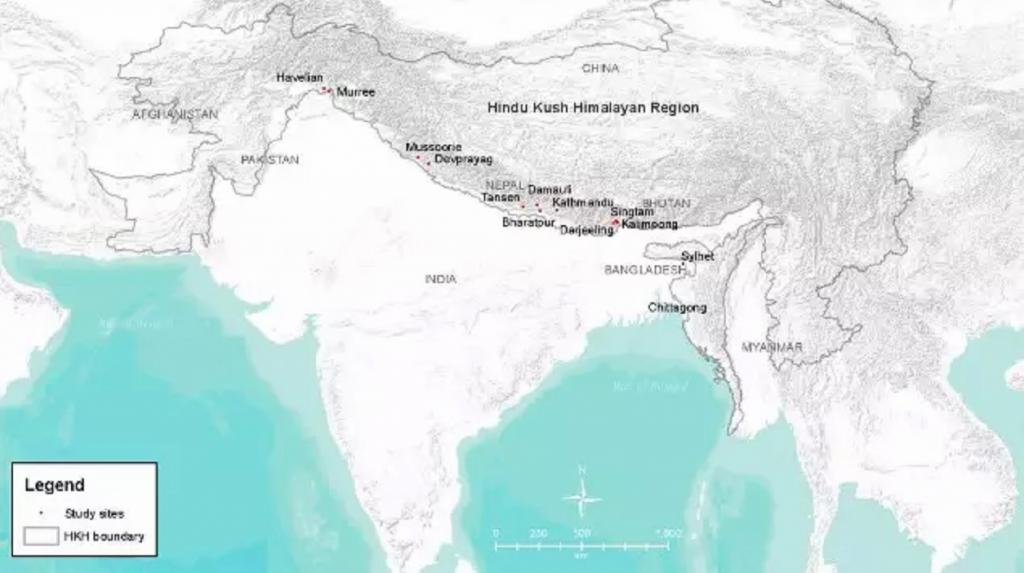 Findings of HI-AWARE research project suggested that urbanisation pulled people from rural areas in the region into nearby urban centres.

It said that while 3 per cent of the total HKH population lived in larger cities and 8 per cent in smaller towns, projections showed that more than 50 per cent of the population would be living in cities by 2050, thereby straining existing water resources.

The study showed that the water demand-supply gap in eight of the surveyed towns was 20-70 per cent, which may double by 2050. There was a high dependence on springs (between 50 per cent and 100 per cent) for water supply in three-fourth of the urban areas.

According to the study, water governance has remained a blind spot in HKH region. Himalayan town largely depend on springs, which were under threat from urban waste and sewage polluting water bodies. Springs were drying up particularly in Mussorie and Devprayag.

Second, water rights and politics of water distribution was a contributor to increasing water insecurity in HKH region.

For example, a fifth of Kathmandu’s poor households did not have access to formal water supply system, because of which they had to pay more for accessing water as compared to the richer households. The study found that rich households spent 38.2 per cent less on water than poor households.

Inefficient management by water institutions responsible was another important factor. According to the study, while large-scale corruption in Tansen had major implications on water governance, efficient upkeep of the same in Damauli meant the situation was relatively better there.

Further, floods and landslides attributed to climate change caused an imbalance in demand and supply of water. Climate change has stressed urban ecosystems by increasing the frequency, severity and intensity of extreme weather events, stated the findings.