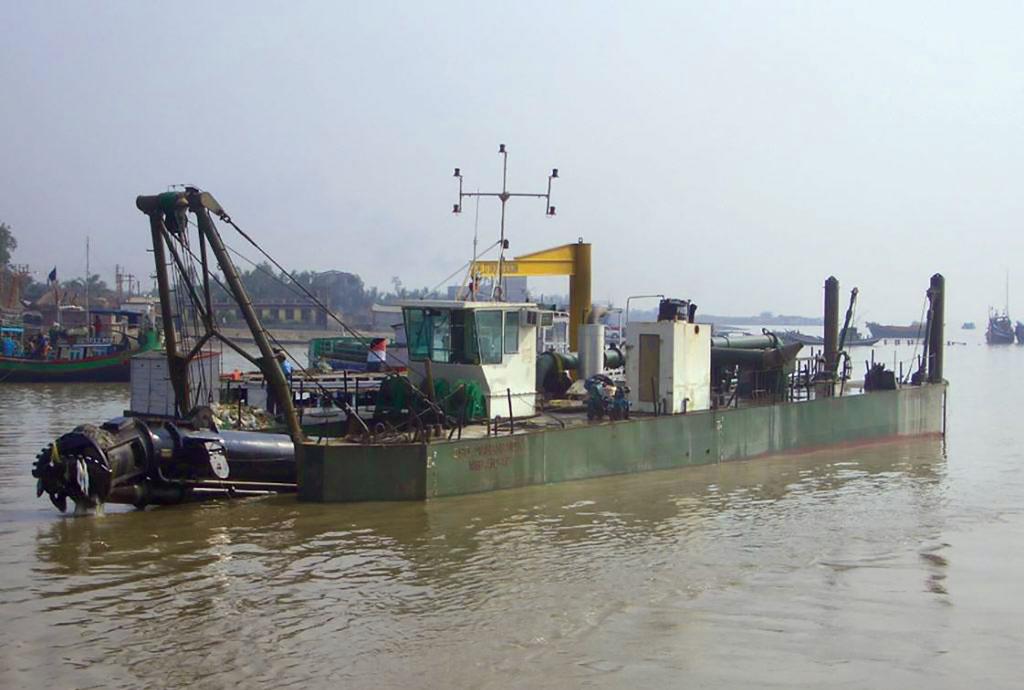 Dredging is undertaken to dig out excessive silt from the riverbed. Large vessels called dredgers (left) are used (Source: nrsc.gov.in)

Assam is crawling out of a ravaging spell of floods. Like any other year, the political machinery is busy assuring people with solutions to the state’s perennial sorrow; often repeating the same words parroted over years. So, when on July 26, the Union Minister for Road Transport & Highways, Shipping and Water Resources Nitin Gadkari announced that dredging of Brahmaputra river would take off by September, it opened a Pandora’s Box. Last year Chief Minister Sarbananda Sonowal made the promise of dredging the river to solve the state’s flooding problem “permanently”. Already close to three months have passed by but there is no sign of any dredging. Rather scientists and officials now say that it is not a viable option and even if pushed hard would not be economically feasible.

Sonowal’s plan involves dredging a stretch of 891 km of the Brahmaputra from Sadiya in the north to Dhubri in the south of the state. Till mid-November, as Down To Earth (DTE) finds, the plan remained on paper and nothing significant was done on the ground. Even the basic Detailed Project Report (DPR) is not ready as of now. Without this the government can’t even move a file to get permission for various activities. “We have forwarded the proposal to the revenue department for financial clearances. After that a DPR would be prepared. We hope to start by November,” says Ranjeeb Ray Baruah, the deputy secretary of Assam’s water resources department. According to the plan, dredging of the Brahmaputra would cost Rs 400 crore. The entire project, which also includes the construction of the Brahmaputra Expressway on both sides of the river, would cost Rs 40,000 crore.

The massive travesty has raised questions about how to tackle the recurrent problem of flooding in a sustained manner. Dredging has emerged as a solution that would practically clear silt from the mighty river thus easing floods and erosion. But experts and Assam government officials argue now that it is not the solution to the state’s recurring floods. It seems that the state government has also changed the objective of its promised dredging plan. Baruah informs DTE, “We are going to dredge only selective reaches (parts of a river channel) to increase the river’s navigability. The entire river will not be dredged.” Baruah replied in the negative when asked if those reaches have been identified.

Dredging is undertaken to dig out excessive silt from the riverbed, which gets deposited over a period of time. Large vessels called “dredgers” are used. Dredging Corporation of India (DCI), a government of India owned company, will take up the project in the Brahmaputra. N S P Prasad, DCI’s deputy general manager, explains the technology, “Small dredgers would be used for the Brahmaputra. We would use Cutting Section Dredger (CSD) and other technologies. It will be decided after we receive a DPR.”

The length of these dredgers may vary from 70 to 130 metres. The CSDs are usually stationary. They are attached to poles, called “spuds”, built in the river. The dredgers are equipped with a big cutter head. It keeps rotating and breaks down the soil into minute pieces. The dredged soil is sucked by the pumps. It is then transported to the shore using pipelines.

“Once it is transported to the shore, it remains there and acts as embankment. Dewatering of the dredged material would be done in the areas having water crisis. The water would be transported back to the river,” Prasad says. This embankment to be formed has been proposed to be converted into the Expressway as promised by Sonowal. 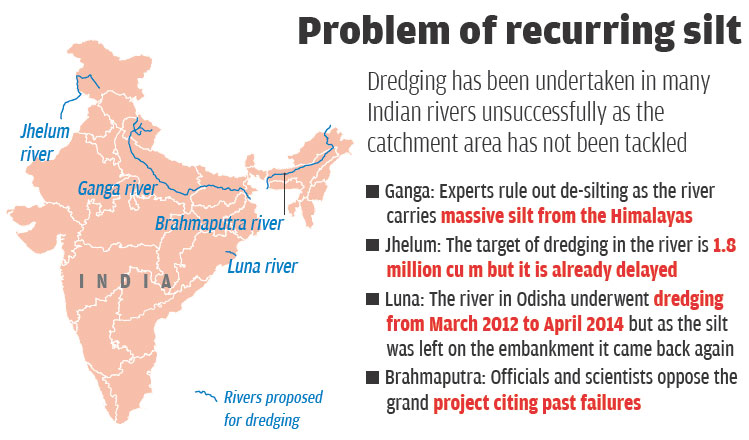 However, there is great confusion over how dredging emerged as the preferred solution to flooding in the state. The Assam government formed an expert committee of seven members headed by the former Gauhati University professor Dulal Chandra Goswami to suggest ways to tackle the Brahmaputra’s sedimentation. The committee nowhere suggested dredging as the complete solution in its report submitted in September 2017. “One of the key recommendations was that there is huge scarcity of credit worthy data regarding the volume and characteristics of the sediment load of the Brahmaputra,” says Arup Sarma, professor with IIT-Guwahati’s civil engineering department, who was also one of the members of the committee. The troublesome question remains that if there is lack of data then how did the government decide to go ahead with the plan for dredging.

According to Sarma, the sediment load of Brahmaputra varies from point to point. “On an average, one can roughly say that the sediment load from Brahmaputra is 0.7 billion tonnes per year. After China’s Yellow River, it is the second highest in terms of sediment yield per unit of catchment area,” Sarma says. This indicates at the massive amount of silt to be dredged out if the plan is implemented.

It is not just this expert committee, but even DCI in a report last year said that a detailed hydrological and morphological study of the river was required before dredging. Besides, the state government is also expected to take locals into confidence before undertaking dredging. “We have not taken consent everywhere. Wherever it was necessary, it has been taken,” says Baruah.

This is not the first time that Brahmaputra has been subjected to dredging to control floods. In the 1970s, two attempts to dredge the Brahmaputra were under-taken. But they failed to make an impact as the silt collected again. Experts also say that dredging only the river or parts of it and leaving catchment areas out of the project is not going to help in controlling floods. According to the Water Resources Information System of India, the catchment area of the Brahmaputra on the Indian side is 1,94,413 sq km. Dredging would be useless unless the government has a plan to deal with this massive catchment area.

The problem of silt is not limited to the Brahmaputra and most Indian rivers are looking for ways to deal with it. And though dredging features as a solution it has not been effective to control floods. The Ganga has been a river of much concern with regards to the problem of sedimentation. The Chitale Committee on Desiltation of Ganga, constituted by the Union government in July 2016 to study silt in Ganga, said in its report, “Though de-siltation can improve hydraulic performance of the rivers, it has no direct role in improving environmental flow in the river. On the other hand, indiscriminate de-silting would adversely impact a river’s environmental flow.” The committee in its report adds that erosion, sediment transport and siltation are very complex phenomena.

It is impossible to apply a one-size-fits-all app-roach to sediment management and control, because the issues involved are frequently very regionally-specific. Local factors such as topography, river control structures, soil and water conservation measures, tree cover, and riparian land-use or land disturbance can have a large impact on sediment loads in rivers. Jammu and Kashmir also announced the Jhelum’s dredging after the floods of 2014 (See ‘In a Tragic state’, Down To Earth, 15 October, 2014). The project was awarded to a private firm with the deadline of March 2017. However, the firm could not complete the work on time and its deadline has been extended by an year. “The total target of dredging is 1.8 million cubic metres. It is being done to restore the flow of Jhelum. Whether it will help minimise floods or not can be said only after the process is complete,” says Abdul Wahid, the chief engineer of the state’s irrigation and flood control department.

Odisha government experimented with dredging in Luna river to restore flow for controlling floods. From March 2012 to April 2014 the dredging continued. “The silt was left on the embankment by the dredger. It obviously came back to the river. How many times are you going to do it?” asks Ranjan Panda, who is involved in river conservation advocacy in Odisha.

A UK-based think tank, Chartered Institution of Water and Environmental Management (CIWEM), came out with a document Floods and Dredging—A Reality Check. It concludes that the river channels do not become large enough to contain extreme floods even after dredging. It does not prevent flooding during extreme river flows. The report was prepared out of a study of the rivers of Somerset county of England in 2014.

The CIWEM document points out three major risks. Firstly, it will increase flood risk for communities downstream by speeding up the movement of floodwater. Secondly, it would destabilise river banks, causing erosion. Lastly, it would lead to the loss of wildlife and habitats both within the river and across the floodplain.

This applies to India as well as the biodiversity in the Brahmaputra will also be at risk. According to the head of life sciences department of Dibrugarh University, Bijoy Neog, the Brahamputra basin has freshwater river dolphins which have been declared endangered by the International Union for Conservation of Nature. According to a paper presented by Patna University’s R K Sinha, D K Kedia and Anupama Kumari during the “International symposium on river biodiversity: Ganga-Brahmaputra-Meghna river basin” in 2014, as many as 583 Ganges dolphins were found within the Assam-Bangladesh stretch of the Brahmaputra in 2012.

Neog doesn’t find it worthy wasting the exchequers’ Rs 400 crore on a project which would merely boost trade at the cost of biodiversity. Sarma suggests a plan must be worked out comprising vegetation and afforestation, which can help reduce the sediment yield of the Brahmaputra. It would benefit people living both upstream and downstream of the river.

The Chitale committee, like Sarma, too pitches for good agricultural practices in catchment areas so that the silt doesn’t get deposited again and again. Dredging then remains a simplistic and incomplete solution to the complex problem of sediment equilibrium and recurring floods. The government and the authorities responsible for the management of rivers need to develop a multi-pronged strategy for ensuring a flood-resilient future.

(This article appeared first in the 16-30 November issue of Down To Earth, under the headline 'Brahmaputra's dredging vacilliations').