Centre and state join hands to clean the Yamuna 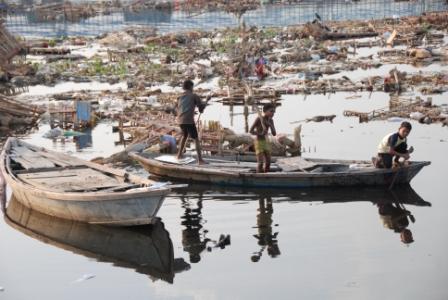 The Yamuna has made the sparring NDA-ruled Central government and Delhi's AAP government join hands over a blueprint to restore the river.

Earlier in August, Union Minister of Water Resources and River Development and Ganga Rejuvenation, Uma Bharti, had met Delhi Chief Minister Arvind Kejriwal and agreed to set up a Special Purpose Vehicle (SPV) for rejuvenation of the Yamuna.

Both parties will prepare the blueprint by next month. The cleaning mission will involve the ministries of urban development and road transport and highways.

Will the SPV be effective?

The SPV will be the sole agency for monitoring all development that will take place in the Delhi stretch of the river. Currently, the administration of the 22-km stretch of the Yamuna and its adjoining area is shared by the Delhi Development Authority, the municipal corporations of Delhi, Department of Irrigation and Flood Control, Forest Department and Delhi government.

According to Delhi government, there is no dedicated body to look after the river and setting up such an SPV will end all complications created by multiple agencies looking after the river, its floodplain and catchment.

But this is not the first time that an agency has been created to overcome such administrative hurdles.

In 2007, a High Powered Committee (HPC) set up by Prime Minister Manmohan Singh had planned to set up an authority called the Yamuna River Development Authority (YRDA). The HPC was chaired by Delhi's Lieutenant-Governor while the chief minister was the vice-chair. In 2010, the HPC approved a design for the statutory framework of YRDA and sent it to the prime minister for approval.

The YRDA was finally created, but it soon lost momentum and became inactive.

Manoj Mishra of Delhi-based non-profit Yamuna Jiye Abhiyan says that many directions of the NGT failed to get implemented because YRDA was inactive.

For example, in case number 6 of 2012, the NGT directed the authorities looking after the Yamuna to clean municipal solid waste and debris dumped on the river bed or floodplain. The multiplicity of agencies caused confusion and the authorities did not know whose responsibility it was to clean the debris.

Mishra adds that if the YRDA had been active, the NGT would have been able to issue directions to the right agency. Mishra even appealed to the Lieutenant-Governor asking him to make YRDA active.

In a recent meeting, the chairman of Delhi Jal Board, Kapil Mishra, called YRDA a temporary body. According to him, the decision to create an SPV dedicated to the development of the river is justified. The success of this SPV will, however, be judged by how efficiently it cleans the Yamuna, say experts.

The Sabarmati is a lifeline for the city of Ahmedabad. But it was neglected and became a receptacle for solid waste and sewage. The municipal corporation decided to bring back a clean river and accordingly, work on riverfront development started in 1997.

While the Ahmedabad Municipal Corporation claims it is one of the best urban infrastructure projects the country has seen, river activists say the Sabarmati project focuses more on recreational and commercial activities. "The project revolves around reclamation of floodplains and commercialisation of reclaimed land only," says Bhavana Ramrakhiani, convenor, Ahmedabad Community Foundation (ACF), a non-profit working on environmental issues. Shops, restaurants, theme parks, promenades and parking lots can be seen in the area around the river.

The construction of the project started in 2005 by reclaiming 185 hectares (ha) of land, according to research by South Asia Network on Dams, Rivers and People (SANDRP). The research also says that 21 per cent of this 185 ha was concretised and sold to private developers. However, government data says only 14 per cent was sold. SANDRP research also states the width of the river was reduced by 22 per cent.

The project was re-evaluated by the National Institute of Hydrology in 2007. It cautioned that the municipal corporation has to work on flood-saving techniques as there were problems in interpretation of designs. "The project faced criticism from local activists as there was poor rehabilitation of the evicted slum population," says Ramrakhiani. She adds that the Sabarmati was neither cleaned nor rejuvenated. The project has only carried the sewage load from Ahmedabad and the surrounding peri-urban and industrial areas to the downstream areas. The water from Narmada canal was brought into the city to fill the dry river.

What then should be done for a clean and healthy Yamuna? Delhi-based non-profit Centre for Science and Environment suggests the following steps:

Provide water in the river for dilution of waste: We must understand that rivers need water to assimilate our waste. Today, Delhi takes water from the river, upstream of Wazirabad, and returns only sewage to it. Even if we were to treat every drop of waste before it reaches the river, it will not help. There are two ways to bring water to the river. Delhi can ask Haryana for more water. But this will be difficult. The second option is that Delhi can begin to reduce its own water demand and build water harvesting structures for capturing rainwater for discharge in the lean season, so that it can allow water to flow in the river.

Maximise the utilisation of the existing STPs: There should be ways for bringing waste to the plants, by lifting it from open drains and treating it. We must not wait to build new STPs (sewage treatment plants) or more drains. The hardware approach needs to go.

Treat but do not discharge into the drains: The treated effluent must not be put back into the same open drain, which carries mainly untreated waste. Today, sewage is treated at the Yamuna Vihar plant in east Delhi, and disposed off in the drain carrying untreated waste outside the plant. The same waste is treated further down in the Kondli treatment plant. Cleaned effluent is then dumped into a drain, which flows past the new colonies of Noida which add more discharges. By the time it reaches the river, there is only sewage in the drain and no water.

Recycle and reuse the treated waste: Treated sewage water must be reused in gardens or in industry. STPs must be built only when there are plans for reuse.

Treat sewage directly in open drains: Instead of waiting for every open "storm water" drain to go underground and disappear, treating sewage directly will ensure that all waste is treated and cleaned as it flows through the city. This would mean using innovative technologies for bioremediation ("green" plants) and oxidation to decompose and degrade sewage.

Treat remaining waste in drain near river: We should build STPs close to the banks of the river to treat whatever waste remains in the drains. This would mean using technologies which need less land to treat sewage. The design should ensure that only treated effluents are discharged in the Yamuna.