Dirty Ganga: Funds down the drain in UP

Contrary to government claims, efforts to clean up the drains flowing into the Ganga have not borne results 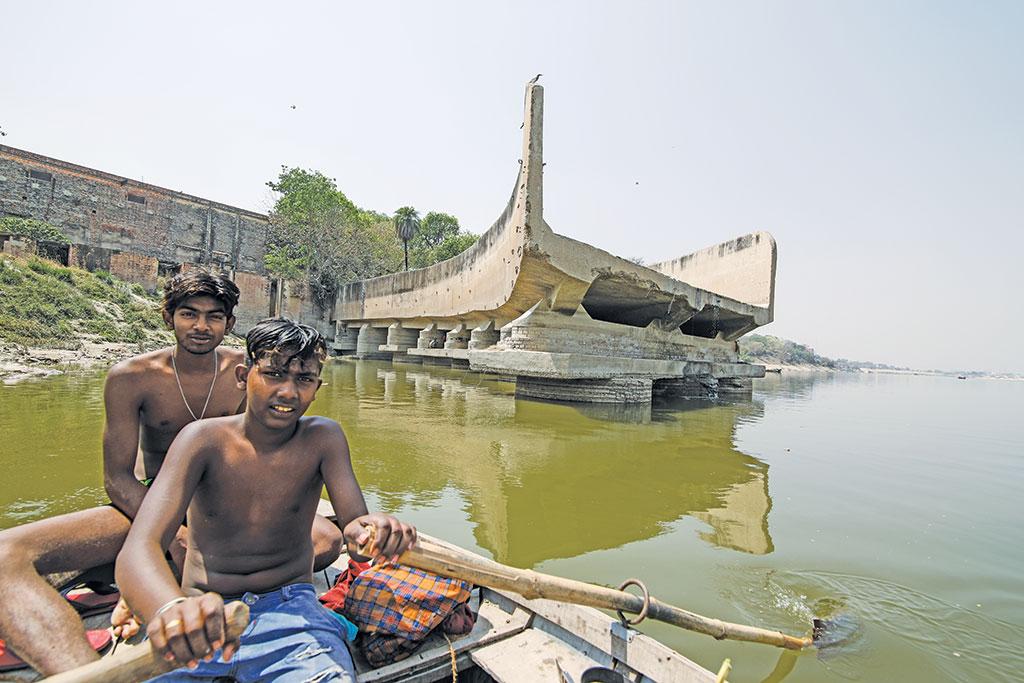 Though sewage from Kanpur's Sisamau drain no longer empties directly into the Ganga and is released into a tributary of the river after being treated, the plant that treats the sewage has been found to be substandard. (Photo: Vikas Choudhary)

On Novermber 28, 2018, when the Uttar Pradesh government announced that it has completely stopped the Sisamau drain in Kanpur from discharging sewage into the Ganga, the news was welcomed by citizens and environmentalists alike. The century-old drain, listed as Asia’s biggest in most government documents, used to discharge 140 million litres, enough to fill 28,000 water tankers, into the river every day. Launched in 2016 under the Union government’s Namami Gange Programme, this was the biggest drain-tapping initiative undertaken at a cost of over Rs 60 crore. However, a report by IIT-Kanpur on March 1 has demolished this claim.

The government diverted the sewage via pipelines to two sewage treatments plants (STPs) on the outskirts of the city — 80 million litres a day (MLD) to Bhingawan STP and 60 MLD to Jajmau STP. The treated effluents from Bhingawan are discharged into the Pandu river, a tributary of the Ganga, while the effluents from Jajmau are dumped into the fields in adjacent villages. The IIT study only analysed the discharge from the Bhingawan STP and found it to be way below standard. The biological oxygen demand (BOD) of the treated sewage was 67 mg/l against the standard of 10 mg/l; the chemical oxygen demand (COD) was 198 mg/l against 50 mg/l; and, the total suspended solid (TSS) was 54 mg/l against 20 mg/l.

The problem is with the upflow anaerobic sludge blanket (UASB) reactor technology used by the STP, says Vinod Tare, professor at the civil engineering department, IIT-Kanpur. “The technology is just not up to the mark at removing pollutants. It has not worked anywhere. Its only advantage is biogas production. But the power consumed in the process nullifies the gains,” Tare told Down To Earth (DTE). This inefficiency of the Bhingawan STP is also corroborated by the Union government’s National Mission for Clean Ganga website, which does not give any figures but says that the discharge from the STP does not meet the quality parameters.

The effluent from the Jajmau STP plant is also substandard. A February 2019 report by the state government’s Ganga Pollution Control Unit (GPCU) at Kanpur says that the BOD and TSS in the discharge do not meet the norms. However, unlike the Bhingawan STP, the technology used here is activated sludge, which is an established sewage treating technology. So what is causing the problem? “Jajmau is a hub of leather tanneries and many of these units release their chemical effluents into the drain before it reaches the plant for treatment,” says Sunil Manjhi, pump operator with GPCU. The Jajmau STP is not designed to treat chemical effluents.

This is not the first time the government has tried to tap the Sisamau drain. Between 2007 and 2010, two pipelines of about 4 km each were laid to divert the drain to Bhingawana and Jajmau as the STPs were underutilised. However, the diversion was not completed and the pipelines choked due to silting. “We cleaned the same pipelines and used them to divert the sewage to the STPs,” Ghanshyam Dwivedi, project manager of GPCU told DTE. “It was hasty work to clean up Ganga before the 2018 Kumbh festival,” counters Rakesh Jaiswal, founder of Kanpur-based non-profit Eco Friends.

There are five more drains in Kanpur that empty into the Ganga and were supposed to be tapped under the Namami Gange initiative—Permiya, Guptarghat, Dabka, Nawabganj and Muir mill drains. DTE visited three of these—Guptarghat, Dabka and Muir mill—and found government claims about them to be wrong. According to the latest data provided by a GPCU official, who wants to remain anonymous, the Muir mill drain that discharges 6.5 MLD sewage has been tapped. But the claim is false since the drain still flows into the Ganga. Scenes at the Guptarghat drain, that discharges 2.3 MLD sewage into the Ganga, also belie government claims. A signboard next to the drain states that it is being bioremediated. Biore-mediation is addition of microbes through plants or other means at the end of the drain to eat up the contaminants. But there was no arrangement for bioremediation. Ditto for the Dabka drain, which discharges 2.5 MLD sewage into the river. Official documents say it is undergoing bio-remediation, but DTE could not find any arrangements for the same. Only few iron railings were put at the end of the drain that prevent solid waste from entering the river.

There are two more huge drains in Kanpur that the government claims to have completely diverted to the Jajmau plant—Wajidpur drain that discharges 7.6 MLD and Sheetala Bazar drain (5.7 MLD). But DTE saw that both were still emptying into the Ganga. Santoshi Devi, whose home shares the boundary with the Wajidpur drain, says, “We have always seen the drain flowing freely and have learnt to live with the stench and a huge number of health problems.”

Tare is apprehensive about the entire exercise. “Some of these are storm water drains which have a natural flow and should not be diverted. They must be rejuvenated for which small STPs should be built. People can recycle and reuse the water instead of just discharging it into the Ganga,” he says.

(The article was first published in Down To Earth's print edition dated April 16-30, 2019)