During best of times, CMWSSB supplies about 830 mld. Media reports claimed that by June, the city will not get any water from its three principal sources — Red Hills lake, Poondi reservoir and Cholavaram lake.

From May 15, CMWSSB stopped drawing water from the Red Hills lake, which supplies 90-120 mld for the city. Local residents are having a tough time in the absence of adequate water supply.

In North Chennai’s Kasimedu, residents rush with buckets to the water tanker that comes once in a week. Hand pumps are installed in narrow streets at every 50 metres, but often there is not even a drop of water in the pumps. Residents of Sholinganallur, meanwhile, have been warned of the impending crisis. They have been asked to use water judiciously.

Since the reservoirs are running dry, Chennai is now dependent on other water sources, including stone quarries, agriculture wells and Neyveli corporation mines.

S Janakarajan, president of the South Asia Consortium for Interdisciplinary Water Resources Studies (SaciWATERS), said the current situation is worse because for the past several years ground water wasn’t recharged despite constant usage.

Janakarajan pointed out that after 2005, the water table has gone down dangerously and is touching rock bottom in many places. There is an increasing mismatch between extraction and recharge, where extraction is often more than recharge.

Adding to the woes is illegal groundwater extraction, which has led to a further dip in the water table. Also, it cannot be denied that water bodies are turning toxic due to pollution which in turn endangers the groundwater quality.

“If the situation continues and the next year the state faces a drought, we might reach a situation where there is no water at all,” said Janakarajan.

“In 2015, the situation in Tamil Nadu was different. The state witnessed historic floods due to rains but it never bothered to save water at that time, so we had a historic drought in 2017,” added Janakarajan. 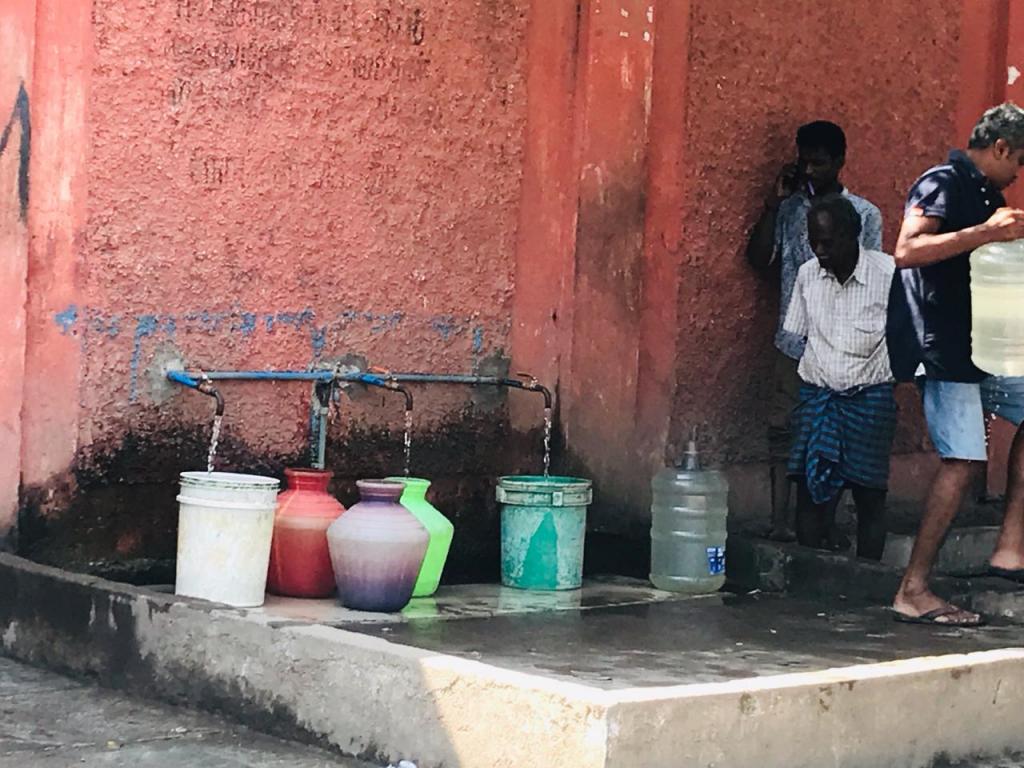 Now the city is primarily dependent on the desalination plants — one in Minjur and the other in Nemmeli with a capacity of 100 mld each.  However, the plants are not working to the full capacity and provide just 80 mld.

Apart from Chennai, people of other parts of Tamil Nadu — which is home to about 67 million people — have been hit hard by inadequate supply of water. Each day has become a nightmare for residents of villages which are not along the Cauvery belt.

Districts of Pudukottai, Peramblur, Karur are badly affected. The situation in places like Trichy, Thanjavur and Madurai, however, is comfortable as far as drinking water is concerned.

Rainwater harvesting pioneer and Chennai’s ‘rain man’ Shekhar Raghavan blamed the present scarcity on the failure of monsoon last year. The northeast monsoon has been deficient by nearly 50 per cent.

Residents more or less complied with the rules but the monitoring agencies have failed to do their work, said Raghavan. Also, maintenance work on the harvesting structures is not being done regularly.

Talking about the measures being taken, Raghavan said, “We have started harvesting road water. Wherever water stagnates on the road we put a recharge structure.”

The dispute over sharing water from the Cauvery river between Tamil Nadu and Karnataka has further added to the distress. “Water has been a sensitive issue and nobody wants to share water with the other state. Demand keeps increasing all the time and source is dwindling. A state needs to become self-sufficient and not depend on others,” added Raghavan.