Fetching water is a woman's responsibility in this arid Rajasthan village 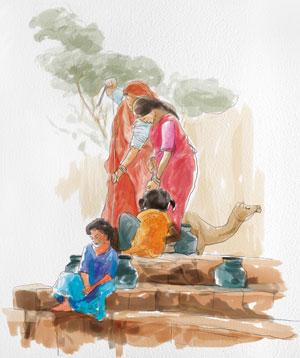 Standing in the middle of the Thar Desert, I wonder which one is more difficult to put up with. Travelling in the scorching sun with barely a few trees to offer shelter, walking on loose, slippery sand, or being mocked for questions that appear silly to the women in one of the country’s driest places—Khadero ki Dhani, a hamlet in Jaisalmer district that receives the lowest rainfall in Rajasthan.

“Don’t you get tired by the multiple trips to the beri every day?” I ask Nakata Devi, 75, who is drawing buckets of water one after another from the lone source of water in the vicinity. The beri is essentially a traditional percolation well with a narrow mouth that catches and stores rainwater, and is located a kilometre from the hamlet. “I do. This is my seventh round since morning. But do I have a choice? We need water. Even the animals need to drink,” Nakata says as she pours water into concrete troughs placed next to the beri. But more than helplessness, her voice appears laced with sarcasm.

The cows and goats huddled around the beri empty the troughs within seconds. I also crave the cool and sweet beri water. It’s 11 in the morning, and the sun is already over my head. The kachcha road leading up to the village allows vehicles only up to a point, and walking the remaining distance in the desert heat has already left me parched. Thirst is the great leveller, I say to myself as I ask Nakata for some water.

Surprised to know that only four cows of the herd belong to Nakata, I ask why she is drawing water for animals that belong to other households. “It’s a common practice here. Whoever comes to the beri around this time provides water to the animals gathered here,” she says. The strong sense of community Nakata displays is not uncommon in this arid region.

Nakata is soon joined by other women from the hamlet, all carrying water vessels. “Do men also come to the beri to fetch water?” My question makes them giggle. “Never. Only we do it,” says Monu Kanwar, an 18-year-old mother. My driver and interpreter for Marwari dialect Kanu Singh, who happens to be from a nearby village, interjects to speak up for his fraternity. “They have to go for work. Most men in the area work as daily wage labourers in other villages and towns.”

Monu shakes her head slightly, but it was enough for me to take notice. On prodding, she says men in the village do not fetch water even if they are at home. It has always been women’s responsibility.

“Don’t you ask them to help you out when they are at home?” I ask only to be mocked again. “My husband says if you need water you should fetch it yourself,” says Kisna Kanwar, a jovial woman in her 30s. Kisna later tells me that she was perfectly plump when she moved to the village with her husband. But numerous trips to the beri and drawing water from it have made her lean. It seems the harsh desert climate has dried up just water, not their sense of humour!

Though there are five beris and a well in and around Khadero ki Dhani, this is the only one that continues to yield water. But its water level will start dipping as the summer approaches. So how do they tide over the long dry season that spans from March to June? “We don’t take bath for 10-15 days and don’t wash clothes for around 20 days,” says 55-year-old Dhuri Devi. “We depend on water tanker,” says Monu. “Since it costs between Rs 800 and  Rs 1,000, we call it once in 10 days. The animals are also given less water than what they need,” she says, adding that they have lost several livestock to harsh summers.

Life is no doubt tough in this sandy terrain. But their refreshing sense of humour and a sense of calm make it appear bearable. While the younger generation wants piped water in their hamlet, Nakata and Siriya, the two sexagenarians in the group, are content with the fact that they now have to travel just a kilometer for water. “When we moved to the village as teenaged brides, we used to travel 20 km to fetch water,” recalls Nakata. The women say their lives changed for better some 30 years ago, when some people from the village discovered the beri, then buried under sand. They excavated it, desilted it and raised a concrete platform around it so that it does not silt up again. Today, the beri harvests enough rainwater to sustain the 25 households in the hamlet for most parts of the year.

Asked for how many days does it rain, the residents say the village receives only a few days of rain. In fact, the district receives the lowest—164 mm a year on an average—rainfall in Rajasthan. The wettest place in the country, Mawsynram in Meghalaya, receives an average rainfall of 11.87 metres.

“Nature is not a public distribution system,” says Jethu Singh Bhati, a resident of Jaisalmer who works with non-profit Thar Integrated Social Development Society. “It has its own way of distributing resources and we can’t do anything about it except working on our habits. I was 11 years old when, for the first and the last time, I used two buckets of water for bathing. My grandfather slapped me and said that I was a sinner in the eyes of God,” narrates Bhati. “That’s how our habits and approaches were moulded. Nowadays, that approach seems to be fading,” he adds.

It’s strange how the approach changes when one considers water as a natural resource rather than a commodity. The privilege of abundance and the arrogance of money make one blind to the abuse of water, while scarcity and hardship bring along its judicious use.

The story has been taken from Pot's-Eye View, a Water Day Special issue (16-31 March)