An ‘ecological disaster’ of sorts is unfolding on a black volcanic beach of the Kamchatka Peninsula in the Russian Far East, according to a report in the media outlet Siberian Times.

Three weeks ago, surfers on the Khalaktyrsky beach outside Petropavlovsk-Kamchatsky, the largest town in Kamchatka, had reported of burning eyes, throat ache, headache, fever and a fear of losing eyesight on emerging from the water, according to the outlet.

Another environmental disaster occurred on the Pacific coast near Kamchatka. The cause is unknown, but the water samples recorded an increased content of petroleum products. Surfers have vision problems after contact with water, and animals die. pic.twitter.com/OIKGukGUYg

Then, sea animals begin to die in large numbers, their bodies littering the beach. These included octopuses, seals, sea urchins, stars, crabs and fish. Examination of the sea water by the administration has shown that levels of phenols and oil compounds have spiked.

The special envoy of Russian President Vladimir Putin to the region has ordered an immediate inquiry into the developments.

On October 3, 2020, users on Twitter also shared satellite photos showing a river in the area flowing into the Pacific Ocean. The river displayed a yellow colour. There is a training camp of the Russian military upstream. Another theory being speculated is that ships carrying oil in the vicinity had leaked it into the sea water. Kamchatka is a UNESCO world heritage site.

Temperatures in 2020 on the Antarctic Peninsula, the northernmost tip of the Antarctic continent, have been the highest in nearly three decades, a study by researchers from the University of Santiago de Chile has found.

This was an alarming development since it could indicate that the ocean in the area was once again warming, according to scientists. 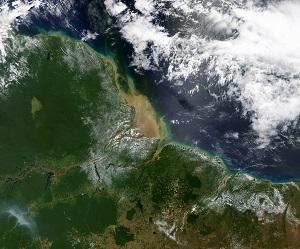 The Moderate Resolution Imaging Spectroradiometer on NASA’s Terra satellite has photographed the enormous amount of Andes mountain sediment deposited by the Amazon river into the Atlantic Ocean, a report on NASA’s website said.

The photo, shot July 29, 2020, shows a dense plume or fan near the delta and estuary of the Amazon. The picture also shows cumulus clouds hovering over the region. Warm, humid air rose from the forest and cooled, resulting in the development of the clouds, the report said.

However, since the waters of the Amazon and its tributaries as well as the air above them were cool, less moisture rose into the air, it added.

Most of the sediment that the Amazon carried to the Atlantic came from three rivers flowing in the western part of the basin, namely the Marañón, the Ucayali and Mamoré, the report said.

Some 1.3 million tonnes of rock, soil and clay are deposited by the Amazon into the Atlantic every year.

Alien species, which have been taken by humans to areas where they are not native, will increase globally by 36 per cent by 2050, compared to the numbers recorded in 2005, a new study has estimated.

The number of alien species in the world in 2005 were 35,000, according to a statement on University College London’s website. The college was part of an international team conducting the research.

Insects, arthropods and birds will especially increase their numbers in areas where they are not native. Around 2,500 alien species will arrive in Europe alone by 2050, an increase of 64 per cent, according to the study.