Happy birthday PM Modi; here are some messages from those affected by Sardar Sarovar

Filling the reservoir up to the brim may be good photo-op, but a dangerous one. Here’s why

Water steadily rises and enters Ekalbara village in Manawar tehsil of Dhar district. The village was initially not counted in the submergence area. Photo: Shatakshi Gawade

Prime Minister Narendra Modi celebrates his birthday on September 17. Unsurprisingly, his choice of venue is the Sardar Sarovar dam and the nearby statue of Vallabhbhai Patel. He spent the morning visiting the control room of the dam on the Narmada after “worshipping” the river. The water level at the dam reservoir was raised to 138.68 metres — the full reservoir level (FRL) — on the occasion.

Not all seemed thrilled:

Many distressed people in the submergence areas in Dhar, Barwani, and Alirajpur districts in Madhya Pradesh have already held up their grievances.

And they have a thing or two to say if the PM would listen.

If he can fly abroad so much, why can’t he visit a village in doob kshetra (submergence area)? asked Gangabai Patidar of Nisarpur. Her home was marked for submergence at 138 m; at 136 m, the water was at her door, she said.

Some 1,200 families there were declared out of danger but the village was sinking.

“The water has filled our streets, it comes up to our door steps but these homes are considered out of doob kshetra. How do we step out and commute? Are we supposed to fly?” asked Gangabai. 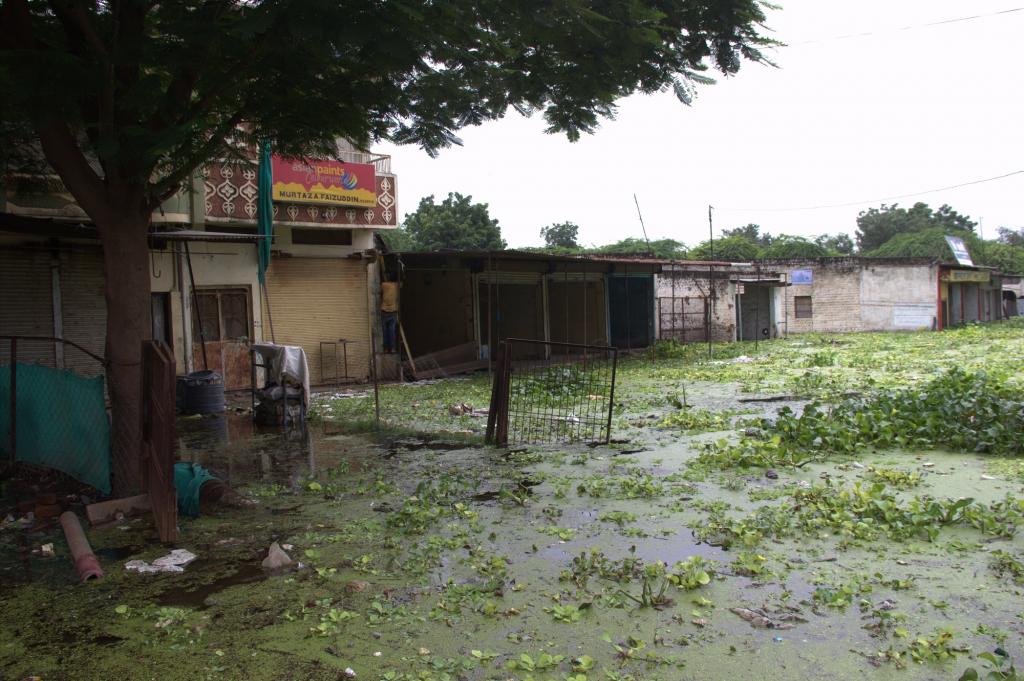 Suresh Patidar, also from Nisarpur, found Modi’s recent tweet hardselling the area as a tourist destination, insensitive. “192 villages are starving, dying, and drowning; hardly anyone has received rehabilitation benefits they are entitled to. All the PM is concerned about is filling the dam’s reservoir before his birthday,” he said. A lack of media attention added insult to his injury.

Shyamabai of Pichodi village, a few kilometres from Barwani town, invited Modi to a public discussion with the oustees, underscoring that with the land drowned, farmers, fisherfolk and potters were starving.

“You forcibly evicted us from our homes and filled them with water. And then, you’re celebrating your birthday as so many humans suffer and animals die,” she said.

‘Minister of a state’

In Kadmal (Dhar district), another sinking village, residents tried to protest in the few areas some not yet under water. They were on a chain hunger strike.

“People are getting ill, contracting infections because of the dirty water entering our streets,” said Ashutosh Radheshyam Sen, one of those on strike. He blamed the governments of Madhya Pradesh and the Centre for trying to “please” the Gujarat government: “The PM should think about the entire country, not just one state.”

“We want officials to come here, see our reality and complete rehabilitation and resettlement equitably,” said Ashutosh, a journalist who also owns a shop that is now submerged.

“Anyone who tried to move the (Sardar Sarovar) project was projected the saviour of Gujarat. But PM Modi seems to have taken the game to a new level to show that he completed it,” said Shripad Dharmadhikary, an activist and researcher.

“Even as chief minister of Gujarat, Modi went on dharna (demonstration) for the completion of this project, ignoring checks the then government wanted to put in place on humanitarian grounds,” he alleged.

“Work on the dam was stalled until 2014 because rehabilitation was incomplete. But when he became PM in 2014, permission to increase the height of the dam was granted in 15 days,” Dharmadhikary added.

Pointing out at an incomplete canal system, he called the closing of the dam gates a show of power. That MP now has Congress-led government, made the situation worse, according to him.

Himanshu Upadhyaya from Azim Premji University advised the PM to “keep in mind that the water storage in this dam has been achieved at huge social costs borne by people upstream in the submergence zone as well as those downstream in Narmada, Vadodara and Bharuch districts — whose land is eroded by intense flash floods created by dam authorities.”

These aspects can only be forgotten “when one is obsessed with PR” and with the “perfect visual appeal” created by an overflowing dam, he warned.

‘Gujarat farmers not thrilled either’

In 2002, Ramsingh Chattarsingh Solanki of Rajghat village (in the submergence area in Barwani) moved to Gujarat as he was allotted land in Kesrol village in Bharuch district. But it was infertile and uncultivable, he alleged.

“The Gujarat government cheated us. We moved back to our old village and now this is drowning,” the 82-year-old man said.

“Crops ready for harvest drowned. Gujarat did benefit, but the water distribution has been mismanaged. Farmers don’t have water, but companies never face a shortage. Seems the dam’s water is primarily for them,” he said.

“Despite the dam getting the lion’s share of central funding under ‘Accelerated irrigation Benefit Programme’, successive Gujarat governments have failed to prioritise development of the canal network,” alleged Upadhyaya.

Figures in the government’s own Socio-economic Surveys show a shortfall between irrigation potential created and utilised. The ad hoc command area development plans and half-hearted implementation of participatory irrigation management were to be blamed too, he added.

‘SSP, we have a problem’

According to the Narmada Control Authority’s daily updates, the Bargi reservoir and the Indira Sagar Project reservoir upstream were almost full. Any sudden release of water from the two reservoirs upstream could lead to flash floods. This is compounded by tremors felt in more than 12 villages along the banks of the Narmada.

“This is the time to generate power at full capacity. Technically that’s the way to operate the dam so that floods can be controlled, not aggravated,” said Vijay Paranjpye, water expert and chairman of Gomukh Environmental Trust For Sustainable Development, Pune. He was concerned about potential shock release of water and said water should have been released:

“It is more important for the Gujarat government and the authority to protect lives rather than celebrate someone's birthday.”